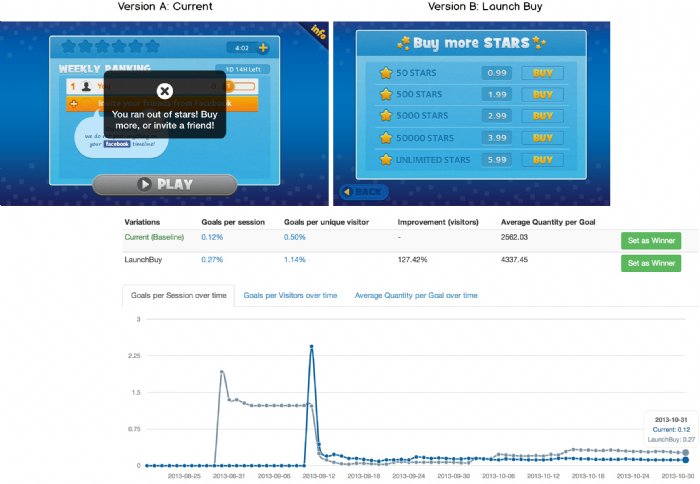 
2,161
With the increasing popularity of free-to-play and ad-supported mobile apps and games, indie developers and large publishers alike have begun to embrace the big data analytical methods popularized by web giants like Amazon and Netflix to improve key metrics like average revenue per user and retention rates.

One of these methods is A/B testing, the practice of showing multiple versions of your product at the same time to different groups of users, and then tracking which version is driving desirable user behavior.

A/B testing for websites is great, but for compiled pieces of software such as mobile apps and games the options for testing have just started to emerge.

A flurry of new A/B testing options for mobile apps have appeared in recent months, none of them address the Unity community of over 2 million game developers. This makes it harder for Unity developers to leverage existing platforms to run A/B testing.

Unity's China business has been growing rapidly in the past year thanks to a broad expansion of developer services, including localization and distribution support for foreign developers seeking to get a piece of the surging Chinese market for mobile games.

The Unity-focused service has been running in beta for about one month before launch, and is already being implemented by EVERYDAYiPLAY - a Krakow-based game studio and publisher of the recent Facebook blockbuster, Vikings Gone Wild.

"This is exactly the tool I was looking for", says EVERYDAYiPLAY CEO Vincent Vergonjeanne. The game has achieved over 600,000 Facebook installs to date and earns revenue from in-app purchases of virtual goods.

Founded this past June in Beijing by Zac Aghion and David Ruiz, Splitforce has served A/B tests to mobile apps and games across 153 countries. Some tests have had the effect of improving in-app purchase conversion rates by up to 125%, which is a big win for apps that rely on such types of revenue streams.

The new support for Unity comes on top of their existing A/B testing solution for iOS, developed while going through Chinaccelerator, the country's premier startup accelerator, earlier this year.