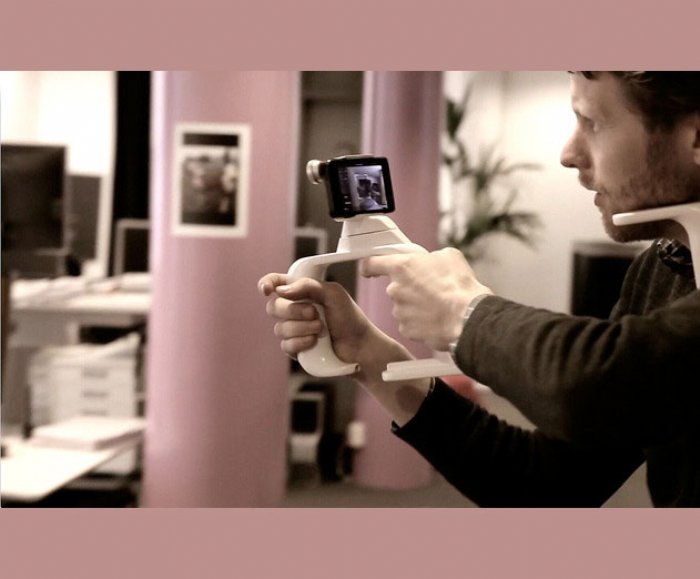 
2,604
The controller looks kind of weird (black would be a much better color) and a iPhone looks perilously connected - however the guys behind Rescape (13th Lab) might just be onto something.
Its an ambitious project, Rescape aims to be the world’s first platform for creating first person shooter experiences that are truly mobile, multi-player and immersive. Using advanced computer vision and specialized optics to track movements, Rescape digitizes the environment around you, then overlay any canvas you choose, and then allows you to interact remotely with other gamers.
So what is it exactly?
Rescape is a hardware game controller and software for a smartphone which turns the device into a reality gaming platform. Rescape’s teams is calling it “Reality Gaming” -  a mix of real and virtual reality gaming.
They relate it to a mix of the experience of paintball combined with dynamically generated fully immersive virtual reality environments that map 1:1 to the real world with centimeter accuracy.
Rescape includes optics which are optimized for robust visual tracking. The device features a 180 degree fisheye lens which, together with the Rescape computer vision SDK, provides motion tracking, even during very fast movements.
The Rescape game controller is optimized for first person shooter gaming, with a trigger, a directional pad and a smartphone mount containing the specialized optics. The controller is resizable to accommodate different arm lengths and preferences, and the shoulder stock can be removed.
The Rescape SDK, specifically developed for the Rescape hardware’s special optics, maps your environment and tracks your movements in the real world with centimeter accuracy, enabling you to physically walk around in virtual worlds that map 1:1 to your real environment utilizing the screen and earbuds of your phone.
How does it work?
Using a technique called SLAM (Simultaneous Localization and Mapping) pioneered by NASA and previously used mainly in robotics, the Rescape SDK maps and tracks your environment in real time using advanced computer vision and sensor fusion.
The SDK also contains a tool for quick and simple structural 3D reconstruction of large environments, allowing gamers to quickly create and digitally “paint” large game spaces like an office and start a game. The SDK includes a C API as well as integration with the Unity game engine.
Multiple players positions can be synced over the network, and real people replaced with digitized representations. You can collaborate, or play against each other, in teams or individually.
Developer Program
The Rescape SDK is free to use and develop for, there are no license costs involved. The company says that enabling any existing FPS game for Rescape is easily accomplished.
For companies that want their existing FPS games to utilize Rescape’s motion sensing technology as a six degrees of freedom (6 DoF) game controller, the company has also included a directional pad on the game controller for moving over greater distances within a game without having to physically walk or run.
By adding support for Rescape into existing games, which is just a matter of dropping in the free Rescape game controller library, developers can turn any existing iOS FPS game from a normal “small screen shooter” into a fully immersive experience, beyond even the console gameplay experience.
The first manufacturing batch will support: iPhone 5, iPhone 5S, iPhone 5C, and will include experimental support for the iPhone 4S. The company has future plans to launch Android compatibility although no timeline has been set.
The company seeking funding through a Kickstarter campaign.