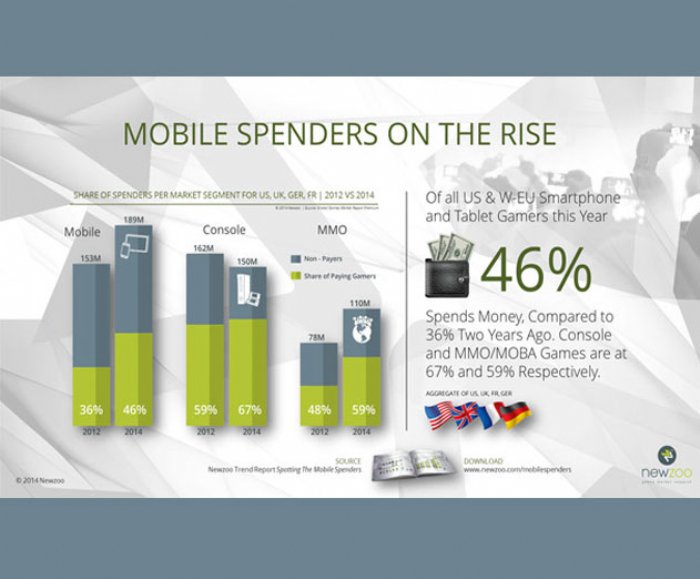 Report: One Third of All Mobile Gamers Spend Money


14,199
Newzoo’s new 30-page complimentary trend report is about tablet and smartphone gaming. The report, “Spotting the Mobile Spenders: An Analysis of Paying Smartphone and Tablet Gamers,” highlights that the holiday months of December and January are game developers dream time.
How can developers capitalize on the annual holiday trend? Newzoo suggests to cut through the app store clutter and develop a valuable user base. Valuable users would be sure to repay developers for the holiday season times.
For game developers, spending and spirits are revealed to be at its maximum peak as game revenues are also at an all time high. Last year’s holiday season, Newzoo shared that global consumer spending on smartphone and tablet games jumped by almost 20% month-over-month.
Amazon turned out to be the best in being able to reach mobile spenders. Newzoo’s report showed that it is Amazon who is able to obtain the most valuable gamers. Amazon’s devices were also highlighted as the most popular of devices. The most popular is the Fire tablets.
Newzoo’s Spotting the Mobile Spenders: An Analysis of Paying Smartphone and Tablet Gamers report showed that gamers using the Amazon Appstore are the most likely to spend money, when compared to iOS and Google Play. The study found that 64% of mobile gamers that use the Amazon Appstore spend money on mobile games in comparison to 37% for Google Play.
More on the Amazon Appstore developer blog can be found here.