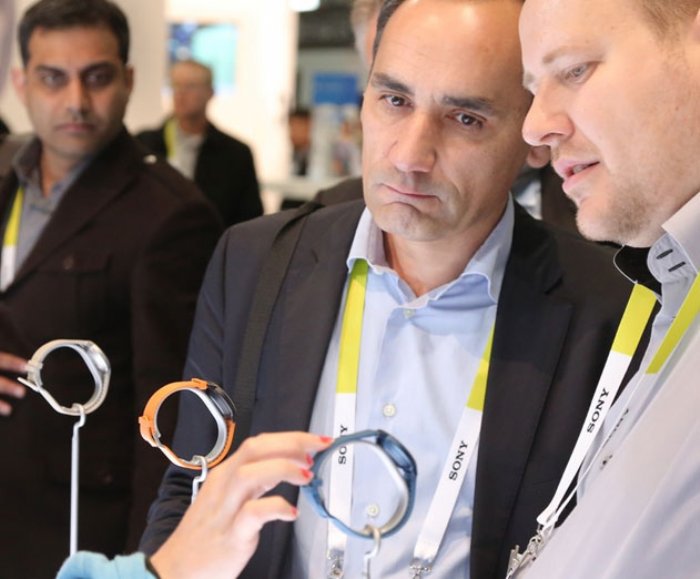 
2,829
If I can sum up CES and Las Vegas as a whole, I have to say one word – walking. I have walked more in four days that I did the past month. Next time I’m bringing more comfortable shoes.
Of course, I was there to see the event from an app development perspective. I kicked off my trip with the AT&T Developer Conference on Sunday/Monday, APPNATION VI on Monday/Tuesday both of which provided a full slate of developer centric content.
Tuesday also offered the CES opening with Samsung Electronics CEO Boo-Keun Yoon leading off the keynote speech talking IoT and connectivity, both of which ended up dominating the whole event. If a product could be connected it was and there was a heavy emphasis on smart devices, especially concerning the home and healthcare markets. Of course connected cars were everywhere.
My CES Experience Overall
I have to say this is an extremely impressive event in terms of size and scale. From a logistical standpoint, I give them an A+! It’s extremely crowded, but they do a good job working internally and with the local municipal resources to help move everyone around.
That being said, from a mobile communications standpoint, I think they have a good bit of room to grow. Their app is well done and functional, but from an interactive standpoint, it was really very static.
For example, I received 10 push notifications over a four day period. Now as a press attendee, I may not have received all pushes, however from the tone of the messages - reminders of keynote speeches, etc. - I think it was all the pushes they sent out to everyone. I was really surprised, because there was so much going on, a push every 10 minutes or so while the event was live each day would not have been out of order.
There also is a big hole in the way they provide directions and maps. Their maps are static graphics. If you are looking for a specific company you have two choices: 1) an overview of the exhibit hall the company it is located in or 2) the actual company booth or area location. The actual location shows up in as graphic in red, but provides no directions. It would have been great for them to show where I was and a route to get me to the company I wanted to go so, and then show me the way as I went along.
Also, there was no use of location aware technology. I was really surprised that they were not using beacons to provide location specific information for the event. I know that it can be done because we recently reported on a Phunware case study about the use of beacon technology for a WWE WrestleMania event that featured autograph signings, live matches, Superstar Q&A sessions, memorabilia displays, the 2014 WWE Hall of Fame; and the WrestleMania 30 main event.
Phunware put 120 beacons positioned throughout the event, giving access to all the logistical information including ticket sales; venue maps; an indoor wayfinding feature to help find the fastest route to points of interest; event guides; opt-in alerts and more. It’s a turnkey system offered by Phunware called engageME and I think it could have solved a lot of the problems I have discussed here. I’ll pass that though along to the event organizers.
The Big Picture for App Developers
As I mentioned earlier, this was the year of smart connectivity and the Internet of Things. Every major tech company and a big number of others all promoted their connected products. Samsung said 100% of the products it offers will be connected in five years.
Unfortunately in the short term, I think all this connectivity will provide a disconnect for consumers. We’ve seen this in the smart phone/tablet market where consumers have different devices/operating systems and developers struggling to provide apps that work for everyone.
For example on the wearables front, many of the new smart watch/band options offer very little in functionality and compatibility with the current smart tech people are carrying with them. Some work with Android only, some can provide push notifications from both Android and iOS devices but that’s it - the differences go on and on. I think that consumers expect their smart watch to have all the functionality of their smart phone, and as you and I know, squeezing all of that on a small watch face is not going to be easy.
CES – It’s About Technology Products
There was a lot of very cool tech out there to be seen. And a lot of connected products that really made sense. For example, I visited with a guy while in line to grab a bite, who has a smart weight scale that can be used with his app to help with weight loss. He had a great response from attendees at the show and it’s could be a successful product for several reasons. It reaches a large potential market, provides an interface with a device consumers need (a scale) to track weight loss, works with the smart technology (phones/tablets) consumers are already using, and adds tremendous functionality as it can provide analytics based on weight loss/gain trends and more.
And there were lots and lots of phone case companies. I mean a lot! One case manufacturer was next door to a vapor e-cigarettes company. My mind is always working and I thought, why not build a phone case that doubles as a vapor device? No worries, I’ll probably see one next year at CES 2016.