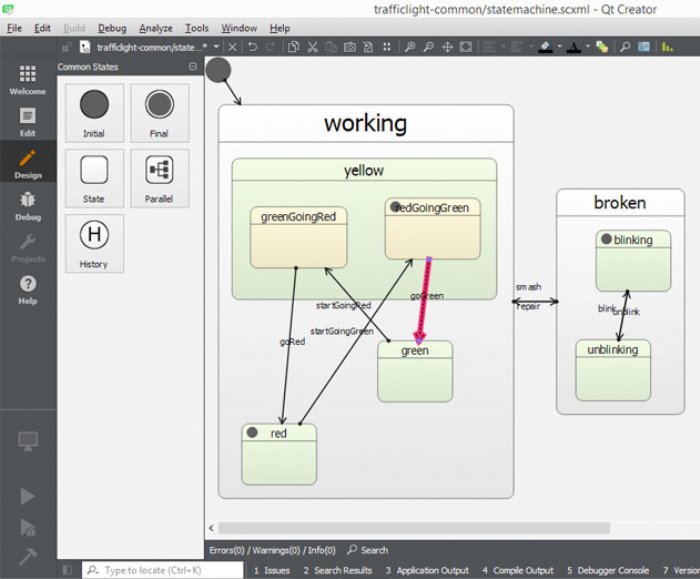 Qt 5.8 released one framework to rule them all


8,358
Qt 5.8 has been released and is available for download from qt.io. Qt 5.8 does of course come with Qt Creator 4.2.1 and an update to Qt for Device Creation. Qt 5.8 is a rather large release, containing quite a large set of new functionality.
The highlights of the release include:
Qt Lite
One of the main themes of Qt 5.8 has been to make Qt more flexible and easier to adopt to your use case, targeted especially at their embedded users. Qt Lite has been the codename of the project under which we did those changes.
The goal has been to make it easier to configure Qt to exactly your needs and leave out features that you don’t need in your project. This brings major savings in the size of the compiled Qt libraries and thus your application.
Qt Wayland Compositor
The Qt Wayland Compositor API that we included as a Technology Preview in Qt 5.7 is now fully supported in Qt 5.8. The module makes it very easy to create your own Wayland Compositor.
Qt Wayland Compositor make it very easy to implement your own custom home screen and application manager. This allows the creation of powerful and more complex embedded systems where you have multiple applications that have their own user interfaces. Qt Wayland Compositor supports handling multiple screens in an easy and transparent way. It comes with both QML and C++ APIs.
Communication and Networking
Qt Serialbus has now graduated to be fully supported in Qt 5.8. It allows you to use Qt APIs for device bus communications and protocols. While the API is rather generic, this version includes implementations for CAN and Modbus.
Qt Network and Web Sockets gained full support for TLS PSK cyphersuites. Qt Network now supports configurable Diffie-Hellman parameters and HTTP/2 in QNetworkAccessManager.
Qt Bluetooth gains BTLE Peripheral support on macOS and iOS as well as BTLE Central support on WinRT.
Qt 5.8 also adds a new Qt Network Authorization module as a Technology Preview, currently supporting the OAuth 1 and 2 authentication schemes.
Qt QML and Quick
Quite a few things have happened in Qt QML and Qt Quick. The QML engine has gained support for caching binary representations of QML and JS files on disk, reducing startup time and memory consumption of the engine. The commercial only Qt Quick compiler is still supported in 5.8, but we are planning to merge it with the new caching infrastructure in the future, leading to a better performing and more tightly integrated solution.
The Qt Quick scene graph has undergone a larger refactoring, making it less dependent on OpenGL. This allowed us to add an experimental Direct3D 12 backend for Qt Quick, and does enable the creation of other backends e.g. based on the Vulkan graphics APIs.
Qt Web engine
As always the Chromium version used by Qt Webengine has been updated, this time to Chromium 53. One long outstanding feature added in Qt 5.8 is the ability to print web pages. Many smaller new features have been added, amongst them a new QML API to define custom dialogs, tootips and context menus, and support for view-source: and some chrome: schemes.
Qt SCXML
Qt SCXML is now fully supported in Qt 5.8. The module makes is trivial to integrate SCXML based state machines into Qt. It builds directly onto the Qt Statemachine Framework, and extends it with with both a SCXML to C++ compiler and a runtime that allows loading SCXML based state machines.
Other improvements
After the initial release of Qt 3D with Qt 5.7, the focus for 5.8 has been on maturing the module. A large amount of bug fixes and performance improvements have been made for the module.
Qt Charts has gained a Candlestick chart type and we have made the QOpenGLTextureBlitter API in Qt Gui public.
The embedded platforms supported by Qt for Device Creation have gained better support for multi-screen systems when using the eglfs QPA plugin and support for 90/180 degree rotated screens.
Finally, many changes happened to the code base to make better use of the new features offered by C++11 and with that clean up and modernize the Qt code base.