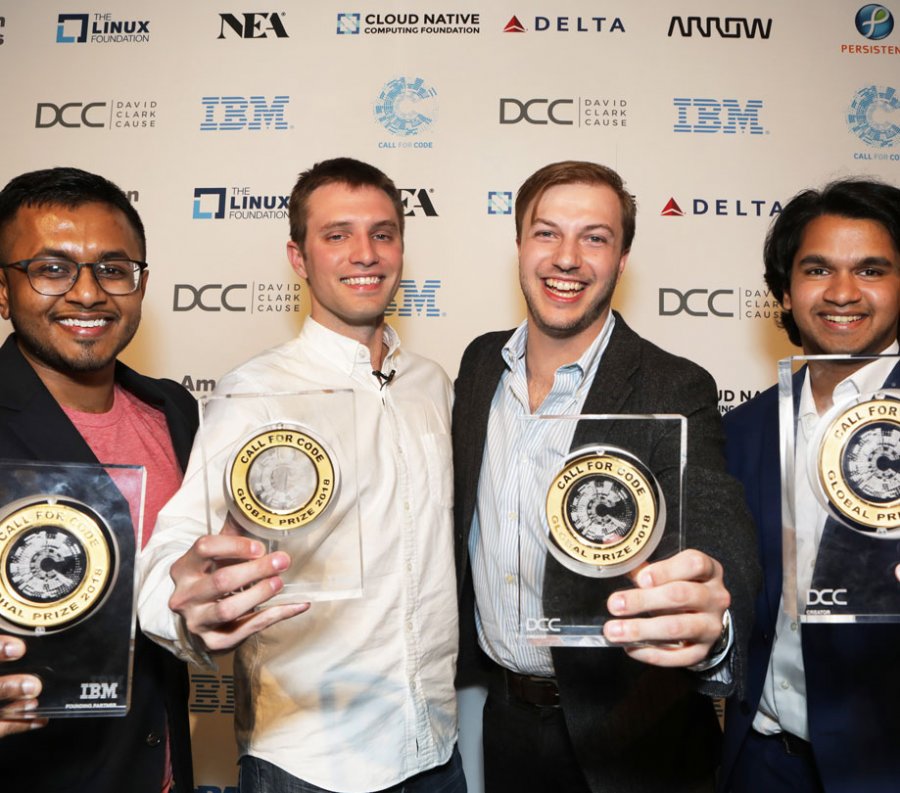 We speak to Bryan Knouse from Project OWL about winning the 2018 Call for Code Global Prize and what the future looks like for his team.

Project OWL (Organization, Whereabouts, and Logistics), an IoT and software solution that keeps first responders and victims connected in a natural disaster, has won the 2018 Call for Code Global Challenge. Call for Code is a five-year global initiative that is the largest and most ambitious effort bringing together start-up, academic and enterprise developers to solve pressing societal issues. The 2018 focus is: preventing, responding to and recovering from natural disasters. Created by philanthropic producer David Clark Cause, IBM is the Founding Member of Call for Code; The Linux Foundation is also a partner, and charitable partners include United Nations Human Rights and The American Red Cross. Former President Bill Clinton is also an eminent judge.

Since the initiative launched in May of this year, 100,000 developers have participated from 156 nations, creating more than 2,500 applications using AI, cloud, blockchain, and IoT. The five-person, U.S.-based team Project OWL was awarded the Call for Code Global Prize - including $200,000 among other benefits - at San Francisco’s Regency Ballroom on October 29. To learn more about Project OWL, what they won, what’s next and their involvement with Call for Code, we took a deep dive with Team Lead Bryan Knouse.

ADM: How did you hear about Call for Code?

Knouse: We were introduced to the Call for code through several outlets, as well as IBM mentors of ours. Some members of our team found the competition through IBM Marketing. Each of us are generally plugged into the technology competition community, so it did not take long for our team to jump on board.

ADM: What is your involvement with Call for Code?

Knouse: I was focused on the software platform, OWL (Organization, Whereabouts, and Logistics). This platform is a data analytics tool that is accessed easily through a conversational interface. It’s built in the cloud as a Ruby on Rails application, with an available API that other developers may leverage so they can build apps on top of OWL.

Magus Pereira brought in the deployable ClusterDuck network concept. After noticing the vulnerabilities of the existing communication infrastructure during hurricanes in his native state North Carolina, Magus ideated Ducks - all-terrain, waterproof devices capable of relaying civilian messages to responders in a completely offline situation. Through the duration of the competition, he prototyped the hardware using Arduinos, 3D printing and a suite of IBM Watson Studio applications.

Charlie Evans is a senior programmer for the largest drilling services company in the United States. He has taken the lead on various web-based applications, including software architecture. His role in this project is focused on software architecture and will continue to be going forward, in addition to gathering field data and moving it into the OWL software platform.

Nick Feuer focused on networking and protocols and spent time on several different aspects of our solution to ensure a smooth transfer of data from hardware on the ground to software in the cloud.

Taraqur Rahman came into this project with experience in the data analytics and machine learning space. He was a critical element behind our ability to accumulate, cleanse and analyze large-scale data to provide first responders and civilians with an effective solution.

ADM: Why/how did you get involved?

Knouse: I thought it was a great initiative to connect with other developers and work on a solution with purpose. Having participated in several technology competitions in the past, I saw this as a perfect opportunity to work with the full support from IBM, the American Red Cross, The Linux Foundation, United Nations Human Rights and a great assortment of mentors and individuals from the first responder community.

ADM: How did your team meet?

Knouse: We met through several channels. A couple members had known each other from previous software competitions. Three of us live in NYC. Another member was introduced via the Call for Code slack channel, and we teamed up to create a team of five. I think we were incredibly lucky that almost immediately the individuals on our team fell into their respective skill areas on day one. This enabled us to each plot our own course in our respective domains, and together I think it all fit snugly for one polished project.

ADM: What is Project OWL/what does it do?

Knouse: Project OWL is a hardware and software solution that aids in preparing for and recovering from disasters. The OWL is a cloud software incident management system that accumulates and analyzes the data present in a disaster to support first responders and civilians. Anyone can use OWL to see a dashboard overview of a disaster, as well as interact through an intuitive conversational experience.

Our hardware, the ClusterDuck network, provides network connectivity when infrastructure and communications are down. The network is comprised of IoT “Ducks” that can quickly deploy to a large geographical area to effectively turn on an internet where there is none.

ADM: What did you win?

Knouse: We are so excited about the support from great organizations like IBM and The Linux Foundation. Winning Call for Code provides us with the ability to lean on their experience when we bring our solution to disaster management. As the winner, we received $200,000 to continue development on this technology, and Project OWL will be deployed via IBM’s Corporate Service Corps. Additionally, we will receive long-term project support from The Linux Foundation as well as the opportunity to pitch our solution to the global VC firm New Enterprises Associates (NEA) for evaluation and feedback.

ADM: What's next for Project OWL?

Knouse: Project OWL consists of two components: the hardware (clusterducks) and the software (OWL). The next steps for OWL are to work closely with NYPD, NYFD, first responders in California, EMS, Government, and military officials to improve our incident management system. Specifically, we want to ensure that the data we accumulate and share with first responders provides fast, easy access to critical details they need to make life-saving decisions under pressure.

For the ClusterDuck network, we have a prototype already manufactured. Next, we need to focus on cost reduction and deployment to prepare the hardware for large-scale implementation. There are numerous tests we need to complete to ensure the hardware will function properly in mission-critical situations. We hope to deploy a field test the ClusterDuck - OWL solution in Puerto Rico during the first half of 2019.

Bryan is a software developer based out of New York City.  Over the last decade, he has built a variety of cloud software tools for marketing agencies and enterprise companies in need of web development and data analytics.  He has competed in numerous software competitions viewing them as an outlet to quickly ideate, design, and prototype software solutions for a wide array of customers.

Recently, Bryan has focused his efforts on AI technologies and how they are going to evolve much of the technology we use in everyday life.  In particular, he is focused on natural language technology and its developing ability to improve the speed and simplicity of traditional enterprise processes such as accumulating, cleansing, and analyzing data.