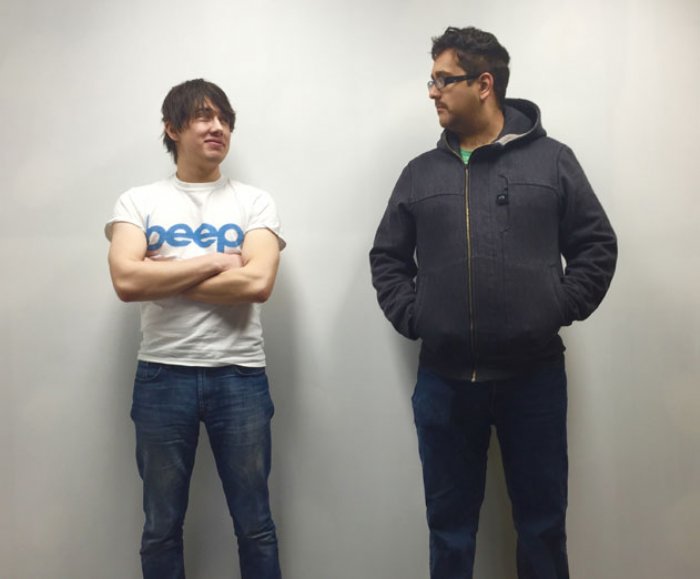 
8,332
Editors Note: Contributed by the developers of Beep, Pieter Parker and Nick Barth
We live in an age where everyone is digitally connected, but emotionally disconnected from each other. While the internet has connected the world, it hasn’t yet promoted human interaction. We interact with images, text, and buttons, not people. It feels as if somethings missing.
Something that we all make use of everyday in face to face conversation, yet often falls to the wayside when we interact online. It’s something that is unique to every single one of us, and can convey more about ourselves than an entire encyclopedias worth of text ever could.
That unique something is our voice, and it’s essential to every human expression and interaction. Until recently, our voice has been limited to people around us, and there hasn’t been a simple way to express ourselves and share our unique voices with the world. It was this simple need that first led to the creation of Beep.
Hundreds of people walk by us every day, and yet we never hear them express themselves vocally, to hear what's on their minds, and to learn who they really are. One of the goals with Beep was to give everyone a stage to share their voice, and express opinions about topics that matter not only to them, but to the world.
From bloggers, journalists and even Internet celebrities - people have a lot to say about a great many topics. But until today, these thoughts and expressions have been in the form of words and pictures, and in the case of the professionals, produced videos.
Beep makes a global conversation possible in a unique way that allows us to understand how people are feeling, not just what they’re typing and to go beneath the words and statements, to hear the human side of the person and what colors the message. When you can get to that we can do something special, as these voices can help bring about change. The social audio movement is already underway, and people are getting more comfortable with sharing their voice, their face, and their identity with the world every day.
Simply connecting people to each other through image, audio, or video isn’t enough. By allowing them to express themselves to each other or to an audience around the world can affect change and it is our role is to create the platform and stages that allow them to do that.
That train of thought resulted in us realizing our second goal. Bringing about change through voice. If people are able to voice real support for important causes, we can turn those voices or expressions into dollars that directly benefit those very causes. That's truly making a difference with your voice.
Social good is a part of Beep's DNA and our mission is to empower the world to speak about topics on a global scale and bring about tangible, positive change. Beep is more than an app or social experience. To us, it represents the start of many ways that can encourage human interaction, creating a new perspective of what an online presence truly means.
When it comes down to it, we really just want to make things that matter to people. It’s not about chasing the next trend, or going for the easy out. It’s about doing what is right, not just for ourselves, but for everyone around us. Right now, that’s building an audio network that enables and empowers people to have a meaningful exchange of expression to each other.
If we can make an impact on just one person, and let them connect in a deep way with someone else in the world, we’ll have been successful in our mission. That said, we have no intention of setting our sights low. It’s not in our nature.
Even though we launched recently, new users have been joining every day, and we’ve already been exposed to countless personalities through Beep, and we’ve fallen in love with each and every single one of them!
Beep has been used by celebrities, such as Will Smith, and we are grateful for the love and support by our many Beepers. Over the coming months, Beep will be used for social good by several organizations seeking to draw attention to their causes. Some of these will have a global impact, and we are excited to hear the many messages of hope that will be circulating the planet.