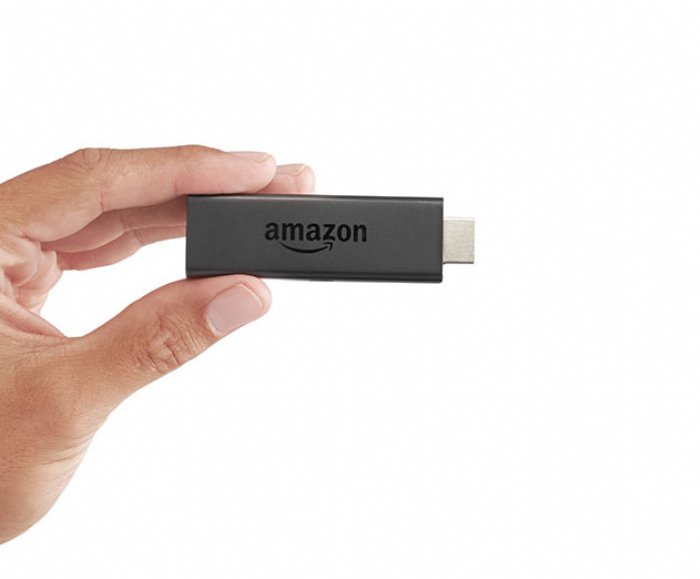 
17,196
Amazon is taking on Google Chromecast with its new streaming media Fire TV Stick, a small stick that connects to the HDMI port on an HDTV. Priced at $39, the new streaming devices will ship November 19.
Developers who have created content for Amazon Fire TV will probably see a bump as the Fire TV Stick makes its way into Christmas stockings offering a dual-core processor, 1 GB of RAM, 8 GB of storage, dual-band and dual-antenna Wi-Fi, remote control, and voice search with Amazon’s mobile app.
And it’s obvious that Amazon is setting its sights directly at Google’s Chromecast as the Amazon news release boasts that the Fire TV Stick has “50% more processing power and 2x the memory of Chromecast.” Another poke at Chromecast: “Fire TV Stick features dual-band, dual-antenna Wi-Fi with MIMO for fast and reliable streaming. Chromecast only has single-band, single-antenna Wi-Fi.” And the Roku stick was not left out of the fray with as Amazon says that the Fire TV Stick has “6x the processing power, 2x the memory, and 32x the storage of Roku Streaming Stick.”
The device includes a remote control and access to the Fire TV Remote App for Fire phone, Android phones, and coming soon to iPhone, which lets users use voice search to navigate and manage playback from their phone and is powered by the same voice search engine as Amazon Fire TV.

Another advantage Fire TV Stick has over Google is its access to Amazon services people are familiar with including:

- Whispersync: Amazon’s Whispersync technology saves and synchronizes a video and music library across all devices. Games that support Whispersync will also allow users to save a place in the game and sync across devices to pick up where the game was left off.
- Worry-Free Archive: Automatically backs up Amazon digital content in the cloud.
- Free Month of Amazon Prime and Netflix: Eligible customers get a free 30-day trial of Amazon Prime when they purchase Fire TV Stick.