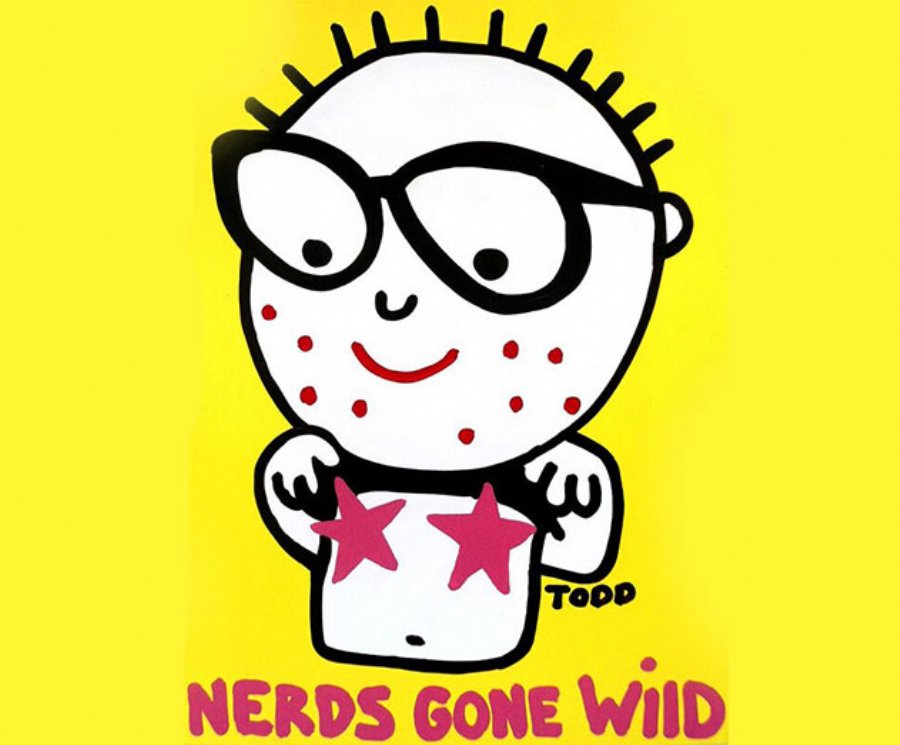 The Ross Art Group, Inc., a popular Midtown New York gallery, has announced “NERDS GONE WILD,” as part of an exclusive exhibit of original art of Todd Goldman artworks that celebrates how the tech industry and art collide. The exhibit titled “NEVER GROW UP” showcases “art you can enjoy seven days a week and it still makes you happy every time you look at it,” Goldman celebrates “Nerds” with colorful subjects, humorous titles and vivid expressions.

Goldman takes the idea of nerds, dorks, and geeks and creates original art celebrating the idea that wearing glasses, being super-smart and liking quantum physics better than anything else is just plain cool. His art gives meaning to the ever-growing fascination the technology industry has with collecting art. The line between tech and art has always been a bit inseparable while the artists creating the art have helped guide the developments of the creative side of the digital world. Goldman takes that logic, combines it with humor and created art that is not only entertaining, but highly collectible and attractive to art collectors known more for their innovations in technology than their taste in color palettes.

The over 100 pieces of original art also marks the first time Goldman’s art has exhibited and been offered for sale in New York. Unlike other artists, Goldman’s art takes a whimsical approach to adult humor in his use of figures, colors and size. The almost child-like approach to his art makes each original canvas an exceptional piece that has been collected by fans, avid art collectors and celebrities from around the world.

Bill Gates once had some famous advice: “Be nice to nerds, chances are you’ll end up working for one.” In many ways, Gates knows who runs the world - NERDS. Todd Goldman knows that celebrating NERDS through art is fascinating. In “NERDS GONE WILD,” Goldman threw out any defining set of rules and expressed “the guy who loves math, punctuation and science and made him fun.” Acting like a nerd, dressing like a nerd, thinking like a nerd is part of the Art by Todd Goldman featured as part of the “NEVER GROW UP” exhibit at The Ross Art Group.

The exhibit opens September 14, 2017 - September 17, 2017 at The Ross Art Group located at 532 Madison Avenue (at 54th), 4th Floor in New York. The gallery opens at 10:00 a.m. ET. Todd Goldman will also make a special appearance during the opening which will be announced soon.

Goldman’s art is an unabashed satire on adult behavior expressed with a youthful vision. No subject matter is off limits. His art celebrates nerds, spandex, stupid boys, mean girls, sexuality, and so much more. Often described as a bit irreverent and a bit controversial but always entertaining, no two subjects are alike. Each piece celebrates the child in all of us. From “Spandex is a Privilege Not a Right” to “I Bring Nothing to the Table” or from “Boys are Stupid Throw Rocks at Them” to “We’re the Same Color You Idiot” the exclusive exhibit is expected to draw both domestic and international crowds.

“I often paint what I am thinking or what others are thinking actually. I think we all need to laugh and my art is meant to take a young approach to adult humor and celebrate it on canvas,” said Todd Goldman.

“We are very excited to host NEVER GROW UP at The Ross Art Group in September,” said Mickey Ross, President & CEO of The Ross Art Group. “It is the very first time Todd’s art will exhibit in New York and we have the honor of hosting. Fans will have a chance to meet Todd, experience his art, read his new book and celebrate the adolescent in all of us. I think all of us would love to “Never Grow Up!”