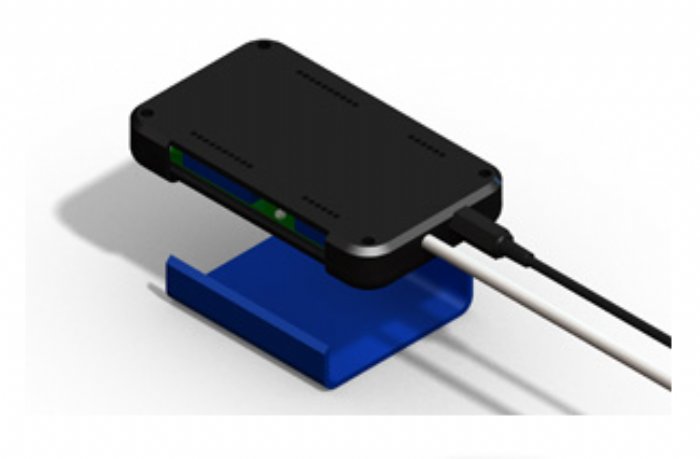 Altoona, Wisconsin USA (May 9, 2013) – Utilizing the user-friendly interface of an iOS app, the Nanospark hardware controller connects the iOS device to almost any type of sensor or actuator. With the Nanospark controller users can gather instrument data and create a custom control system to manage equipment operation.
The Nanospark controller has eight digital and six analog inputs, as well as eight digital and two analog outputs. Outputs can be set and inputs can be read by simple communication with the iOS framework.
Combining the power of iOS devices with the ability to interact with the physical world, allows developers to move beyond controlling bytes and pixels to interacting with physical objects and environments. For example, a simple process controller could monitor ph, humidity, air flow and temperature. The controlling application can use the immense feature set of the Apple device to process that data or share it with others. Process data can be geotagged and shared to remote services as it's acquired. The global range of mobile communications adds the ability to monitor the system or receive alerts almost anywhere.
Nanospark's programmers are developing functional sub-sets of code to use these features and the internal iOS sensors. As much as possible sub-sets will be shared as open source code. Nanospark has already integrated the controller to work with services like Twilio and Pachube/Cosm. The Apple device's camera is being used for basic vision system processing. "We have leveraged existing code in our product development and we look forward to sharing these building blocks with others; allowing faster and more productive innovation for equipment developers as well as the general community of programmers," says Nanospark founder Steve Dye.
The Nanospark controller is a unique interface which uses the immense power of an iPad, iPhone or iPod touch to connect with a wide variety of sensors and switches. By bridging the physical and the digital world Nanospark can be as versatile as the human imagination.
Media Contact:
Joel Labrucherie
(715) 831-6353
interact@nanospark.com
www.nanospark.com