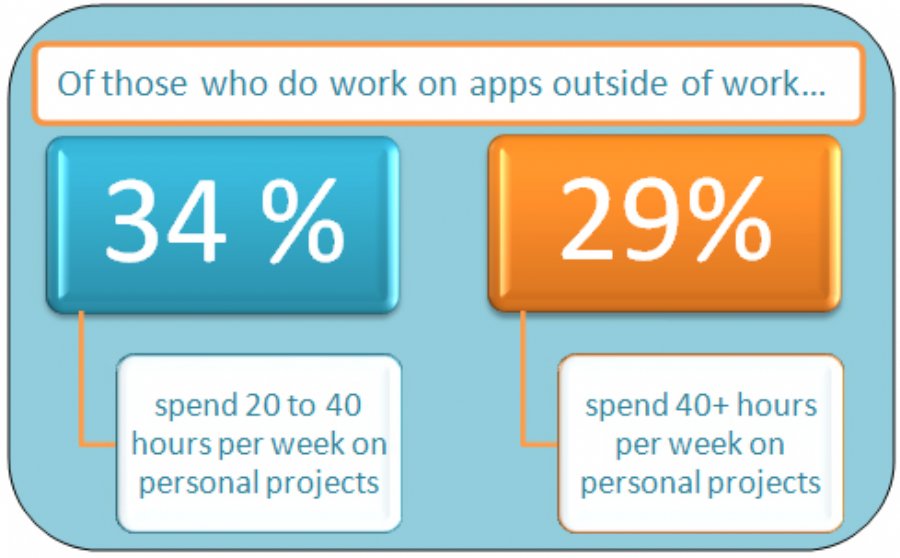 
2,163
Evans Data study shows more than half of all app developers are moonlighting

The number of developers who see the creation of mobile apps as a sideline has increased to more than 50 percent of North American software professionals, according to a research report from Evans Data.

In April, Evans released an earlier study which showed 41 percent of developers who create mobile apps for app stores are doing so while working full-time in software somewhere else. According to the latest The North American Development Survey, however, which looks at all developers--including those who aren't necessarily creating products for app stores--more than half are moonlighting.

"We see lots of evidence that the bulk of those apps are being developed by the same developers who write traditional software for many types of companies as their day job," Evans Data said.

For those doing the moonlighting, the pay may not amount to much right away, but the hours are long. Thirty-four percent said they work between 20 to 40 hours, while 29 percent treat mobile app development as a second full-time job, logging more than 40 hours a week.

Less than a quarter of those featured in the previous Evans Data survey described themselves as hobbyists who don't write software for a living. However, the more recent report indicates 48 percent view their mobile app efforts as something they're doing for the love of it. "Almost one-third say they like the idea of creating an app, selling it and making money on the side," Evans Data added.

The number of those moonlighting might be attributable to the overall increase in the number of companies who are hiring developers to create enterprise apps for internal or company use. A report released two months ago from the CTIA and the App Developers Alliance estimated there are more than 500,000 app development jobs in the U.S. as of this past April. The largest portion of these jobs were in California and were spread across a range of industries, including financial services, tech firms and non-profits.

Money isn't the main factor driving after-hours developers, however. Evans Data said the gaining new skills or improving on existing skills were the most common motivation for creating mobile apps on the side. The research showed that the more experienced a developer was, the more time he or she was likely to devote to creating mobile apps in his or her personal time.

For more:
- read the full study