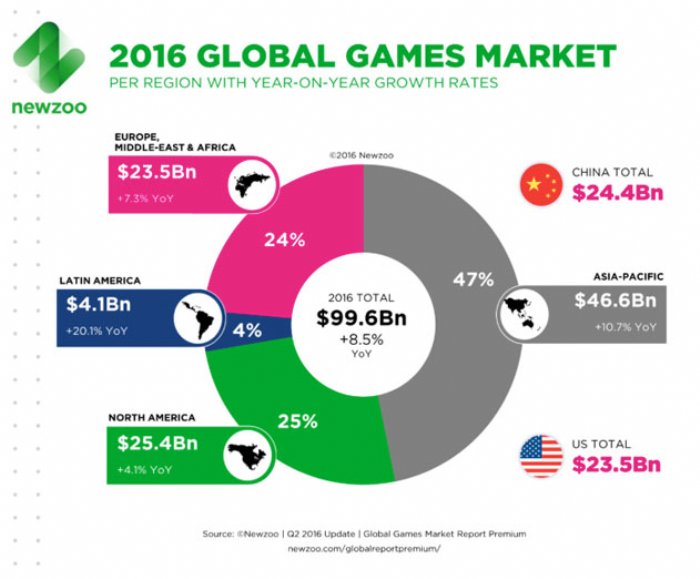 
28,288
Newzoo has released the latest quarterly update of its “Global Games Market Report”, which predicts that the total game market revenue in 2016 will be just shy of $100 billion ($99.6 billion) up 8.5% when compared to 2015.
For the first time mobile game revenue will overtake PC gaming with $36.9 billion, up 21.3% globally. Regionally, APAC continues to lead all regions worldwide, accounting for 47% of the market. Newzoo expects the global market to continue to grow at around 7 percent (CAGR of +6.6%) through 2019, eventually reaching $118.6 billion with mobile gaming at $52.5 billion.
According to the report, China gaming revenues will reach $24.4 billion this year, just ahead of the US’s anticipated market size of $23.5 billion. China’s PC market is showing signs of slowing growth, with a 4% increase compared to the previous 16% as the success of “core” mobile titles is starting to cannibalize PC game spending. The mobile segment in China is growing faster than estimated and will reach $10.0 billion this year, up 41% from $7.1 billion in 2015. China will remain the largest games market for the foreseeable future, growing to $28.9 billion by 2019.
North America’s year of year (YoY) growth rate of 4.1% is reportedly mainly driven by the mobile segment. Console revenues remain stable as the segment moves toward digital and continuous monetization. Western Europe will see a slightly higher growth rate of 4.4% which can be mainly attributed to the fact that the region has seen slower adoption of mobile gaming to date. Eastern Europe is predicted to grow faster, with a 7.3% YoY growth rate. Latin America is predicted to reach $4.1 billion in 2016, offering a  20.1% YoY increase and mobile games will generate $1.4 billion, up from $900 million last year.
Newzoo expects game software revenues from VR to remain marginal for the near future and to largely substitute other game spending on console, PC and mobile. As the uptake of VR hardware plays out, game software revenues will automatically be absorbed into current PC, TV/console and mobile revenues. In the short to medium term, Newzoo expects the lion’s share of VR revenues to be generated by hardware sales, spectator content, and live viewing formats.
The analytics from the report use Newzoo’s Global Games Market Forecast Model which projects gaming revenues and numbers per segment, region and screen on a global, regional and country level. It also shows the share of paying gamers and average spend in the same granularity.
These projections are analyzed in various ways, comparing year-on-year growth rates, market share, CAGRs and absolute amounts in USD between the regions and segments, as well as the development of specific regions or segments in time. These projections are compared to available third-party sources on a local or global level. Given the pace of the developments in the games industry, Newzoo reviews its conclusions and assumptions every quarter, taking into account newly available data and insights. Before publication of any data, Newzoo also performs validation checks in various ways including comparison against historic internal data, comparison against market figures from alternative sources and validation from several Newzoo clients.