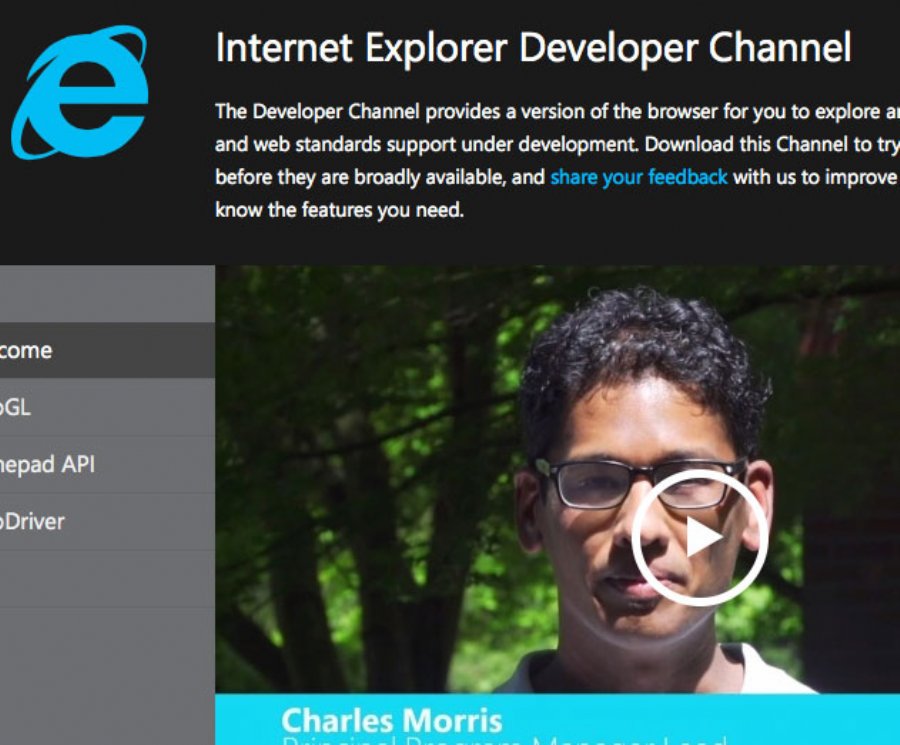 
2,249
Microsoft has announced the release of its new Internet Explorer Developer Channel, a fully functioning browser designed to give Web developers and early adopters a sneak peek at the Web platform features the company is working on. The Developer Channel is available for download for both Windows 8.1 and Windows 7 SP1 customers running Internet Explorer 11.
The IE Developer Channel can run alongside and independently of IE11, and has all of the browser features in IE11, as well as the latest platform features Microsoft is working on.
Earlier this year, Microsoft described some of the new capabilities of the F12 Developer Tools in IE11 with Windows 8.1 Update, and its focus on providing accurate data in the DOM Explorer and actionable data in the memory and performance tools.
The IE Developer Channel comes with even more improvements to the F12 developer tools including:
- An enhanced debugging experience with event breakpoints that help get to event-driven bugs faster.
- Richer analysis capabilities throughout the Memory and UI Responsiveness profilers, which support further reduction of noise through multi-dimensional timeline filter, while further increasing the semantic value of the data being reported by lighting up performance.measure() based instrumentation and dominator folding.
- An improved navigation experience that provides more keyboard shortcuts (ctrl+[ and ctrl + ]), as well as new header notifications, which allows the ability to quickly determine whether any of the profiling tools are running or how many errors a page has.
IE Developer Channel also comes with support for the WebDriver standard through which Web developers can write tests to automate Web browsers to test their sites. It’s a programmable remote control for developing complex user scenarios and running them in an automated fashion in a Web site and browser.
IE Developer Channel comes with support of the Gamepad APIstandard that lets developers use JavaScript to add gamepad support to Web apps and games.
The IE Developer Channel also improves WebGL performance and adds support for instancing extension, 16-bit textures, GLSL builtin variables, and triangle fans. This release improves their Khronos WebGL Conformance Test 1.0.2 score from 89% to 94%.
This release of the IE Developer Channel uses a combination of code changes and virtualization to run alongside IE11. This virtualization creates a small performance hit, so they don’t recommend using this version to measure a site’s performance. Microsoft also does not recommend install this version in an enterprise environment.