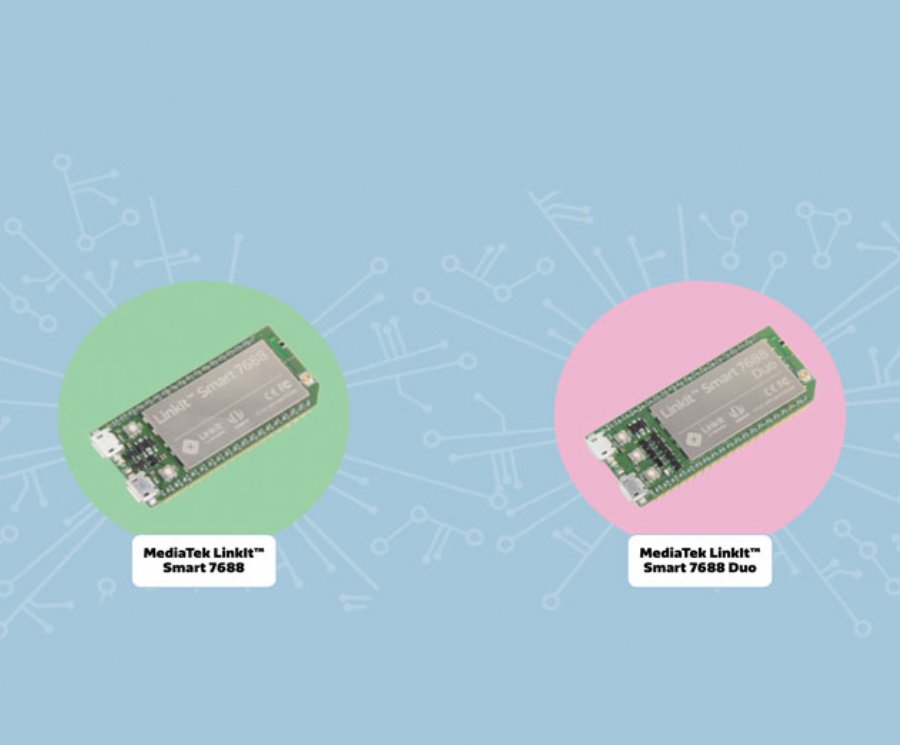 
12,785
MediaTek Labs new LinkIt Smart 7688 IoT development platform is the company’s latest addition to the LinkIt portfolio of development platforms offering IoT developers a variety of programming options for rapid development of advanced Wi-Fi based devices such as IP cameras, surveillance devices, smart appliances and Wi-Fi gateways that make use of cloud services.
The platforms offer open-source software compatibility with support for a number of programming languages and use of Linux. Two versions of the platform’s Hardware Development Kit (HDK) are available and both development boards feature built-in Wi-Fi, 128MB RAM and 32MB Flash, and a wide variety of options for connecting peripherals. The two versions are:
(1) - LinkIt Smart 7688 which includes a microprocessor unit (MPU) based on the MediaTek MT7688AN system-on-chip (SOC).
(2) - LinkIt Smart 7688 Duo, which in addition to the MPU includes a microcontroller unit (MCU) and is Arduino compatible.
OpenWrt developers can use the standard OpenWrt SDK to create native C applications for IoT devices and access more than 2,000 software packages that can offer additional functionality. Web and mobile app developers receive support for Node.js and Python offering a comfortable route into IoT development. Developers can also use the Arduino IDE to develop applications for the MCU and have realtime control of peripherals.
The LinkIt Smart 7688 is able to take advantage of the MediaTek Cloud Sandbox for data collection, visualization and analytics during development. A fully open-source version of the Wi-Fi driver is in development and expected to be made available by MediaTek Labs in the coming months.
The MediaTek LinkIt Smart 7688 and 7688 Duo development boards are available to ship globally from Seeed Studio. The LinkIt Smart 7688 costs $12.90US, while the LinkIt Smart 7688 Duo costs $15.90US.