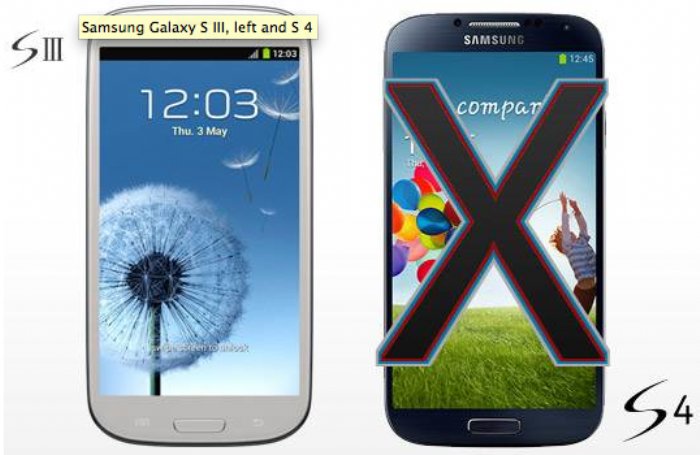 Is the Samsung Galaxy S 4 worth the upgrade


4,248
Samsung has finally unveiled its new flagship smartphone for 2013: the Galaxy S 4, available at the end of April. The Galaxy S3′s successor will come with a 1.9-GHz quad-core Qualcomm 600 processor for U.S. models, a 5-inch Super AMOLED 1080p display and a host of new gesture-based features. But if you own a Galaxy S III, is the S4 worth the upgrade?
Here are 4 points on the subject that might change your mind before signing up to have a new S4 delivered to your door.
1. The design isn't that much different
There are few subtle aesthetic alterations to the Galaxy S 4, but it still looks nearly identical to the Galaxy S III. The new flagship comes with the same soft rounded edges and plastic frame that you’ll find on the S III, but with a slightly slimmer and lighter chassis and slightly larger screen.
The S 4 is 0.31 inches thin, marking a 0.4-inch difference from the 0.35-inch S III. It also comes with a larger 5-inch screen compared to the S III’s 4.8-inch display. You’ll be able to feel and see these differences when the phone is in your hand, but don’t expect a dramatic overhaul in terms of design.
2. Galaxy S3's will get the same software via an update
This means you can enjoy many of the same features as the new device is going to offer because a truck-load of them are in the software changes, not just in the hardware.
3. You’re not getting Samsung’s fastest processor
Samsung will be launching two versions of its Galaxy S 4. The U.S. version will feature a 1.9-GHz Qualcomm Snapdragon 600 processor, while the international edition will get Samsung’s 1.6-GHz octa-core Exynos chipset. So if you live in the US you're going to get a slower phone than those living outside our borders! It has to do with the fastest processor not having integrated 4G LTE support.
4. Not much difference in the screen
You spend 95% of your time on a smartphone staring at the screen, so it should be a key feature you look for when purchasing a device. But the jump from the S3 to S4 won't have you doing cartwheels because there is not much difference in brightness and overall clarity. The S 4’s 5-inch Super AMOLED screen registers at 258 lux, which is brighter than the S III’s 213 lux display, but way below the 299 lux category average. By comparison, the HTC One registered 463 lux on our light meter, and the iPhone 5 gets a 525 lux.
Bottom line
The Galaxy S 4 will be one of the most talked about smart-phones for 2013. Samsung has done alot to further the evolution of it's flagship device and will undoubtably attract users to move over to the S4. In the end, it is slightly faster, brighter, and thinner - but you'll need a quick eye to catch the changes because on the surface it's not to evident where the changes are.
Floating Touch Demo
Smart Pause Demo
Internet Browsing Demo
Samsung LinksSamsung Mobile Channel (live video)  (youtube.com)Samsung Mobile Twitter (twitter.com)Samsung Mobile Facebook (facebook.com)Other LinksABC News (live blog) (abcnews.go.com)Android Authority (live blog) (androidauthority.com)Android Central (live blog) (androidcentral.com)Ars Technica (live blog) (arstechnica.com)CBS News (live blog) (cbsnews.com)CNet (live blog) (cnet.com)Droid Life (live blog) (droid-life.com)Emirates 24/7 (live blog) (emirates247.com)Engadget (live blog) (www.endgadget.com)fonearena (live blog) (fonearena.com)Forbes (live blog) (forbes.com)The Inquirer (live blog) (theinquirer.net)PC Advisor (live blog) (pcadvisor.co.uk)T3 (live blog) (t3.com)Techno Buffalo (live blog) (technobuffalo.com)The Verge (live blog) (theverge.com)