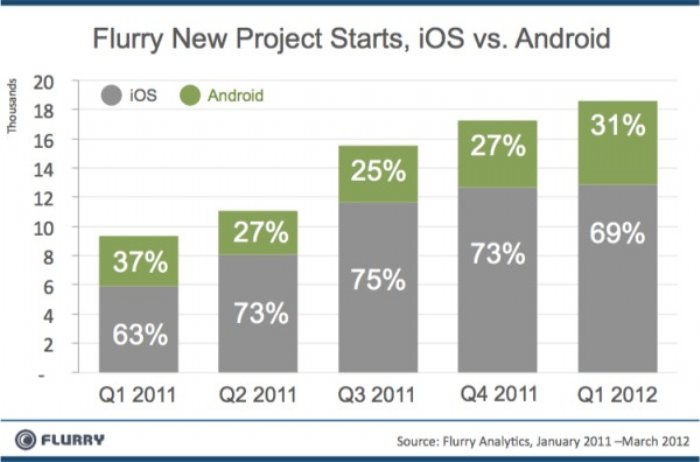 Nearly seven of every 10 apps being created in the first quarter of 2012 were for the iOS platform, with the remaining three going to Android, according to new data released today by research firm Flurry Analytics. iOS generates twice as many apps as Android despite Google's mobile operating system commanding 50.8 percent of the smartphone market compared with Apple's 31.4 percent, according to ComScore data release last week.

One key reason for Apple's popularity with developers is its dominance in the tablet market. Apple's iPad accounted for 88 percent of all tablet user sessions in the first five months of 2012, followed by Samsung's Galaxy Tab with 9 percent and Amazon's Kindle Fire with 3 percent.

"At the end of the day, developers run businesses, and businesses seek out markets where revenue opportunities are highest and the cost of building and distributing is lowest," Flurry said in its findings. "In short, Android delivers less gain and more pain than iOS, which we believe is the key reason 7 out of every 10 apps built in the new economy are for iOS instead of Android."

Another contributing factor to developer disparity is fragmentation in software and hardware, which Flurry said appears to be increasing, making Google's platform more complex and costly for developers. The study notes that 17 of the top 20 Android devices in May 2012 had a share of 6 percent or less in consumer application sessions, meaning that each additional device supported by developers will deliver only a small increase in distribution.

"This means that the majority of consumers are running on an Android operating system that is three to four iterations old," Flurry said.