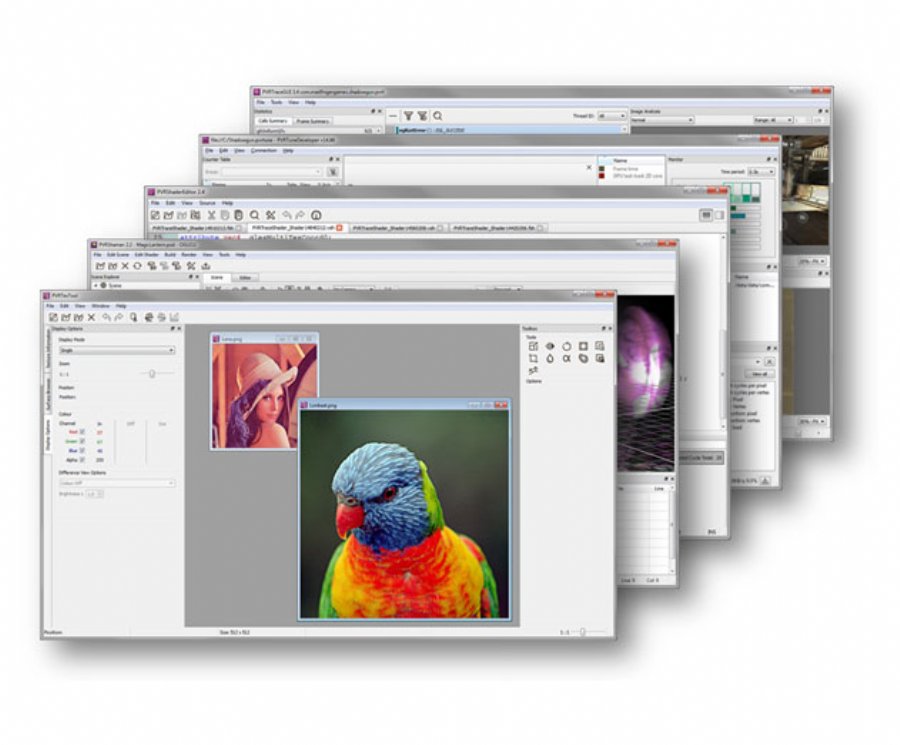 
13,661
The PowerVR SDK v3.4 is the latest release of Imagination Technologies software development kit which offers a full range of licensable multimedia technologies across the areas of graphics, ray tracing, video and vision.
Key features of this release include the addition of the latest compilers for PowerVR Series6 (FP16 and FP32) and Series6XT GPUs to PVRShaderEditor, providing more up-to-date shader profiling. PVRShaderEditor also adds new functionality to access the GLSL disassembly for these compilers as well as full instruction set documentation for PowerVR Rogue GPUs.
Having access to the GLSL disassembly inside PVRShaderEditor and the PowerVR Rogue ISA documentation means developers can now effectively see shader code being translated into actual Series6 (FP16 and FP32) and Series6XT assembly, providing the opportunity to tune for various performance and power optimizations. In addition, several performance optimizations have been made to the different utilities in Imagination’s PowerVR tools suite.
A new WebGL SDK has been included in the package, and Imagination has added 64-bit support for Android 5.0 Lollipop and Linux support for MIPS-based processors. Imagination has also significantly improved the documentation, tutorials and community support.
PowerVR tools offer new look, improved functionality with revamped user interfaces for PVRTexTool, PVRShaman, PVRShaderEditor, PVRTune and PVRTrace to make them more modern and up-to-date. There is now also support for OpenGL ES 3.1 in PVRTrace. Imagination has also significantly reduced the application’s memory usage and added a data compression option for trace files to reduce their file size.
In PVRTune Imagination has added several new counters and made significant performance optimizations. The company has also renamed TA and 3D timing data to Tiler and Renderer, respectively, for improved clarity.
PVRShaderEditor adds the latest compilers for PowerVR Series6 (FP32 and FP16) and Series6XT GPUs to provide more up-to-date profiling. Imagination has also added GLSL disassembler output for these compilers, and included full instruction set documentation.
In PVRTexTool, Imagination has increased the performance of ETC decompression, which is now up to 20% faster per surface. There has also been the addition of plugin support for 2015 versions of Autodesk 3DSMax and Maya.
For this release, Imagination has enhanced the documentation that accompanies its PowerVR SDK and tools. They have rewritten large amounts of its utility user manuals to clarify them. They have also created a totally new SDK Browser to facilitate the access to SDK materials such as installation instructions, examples, source code, documents and more.