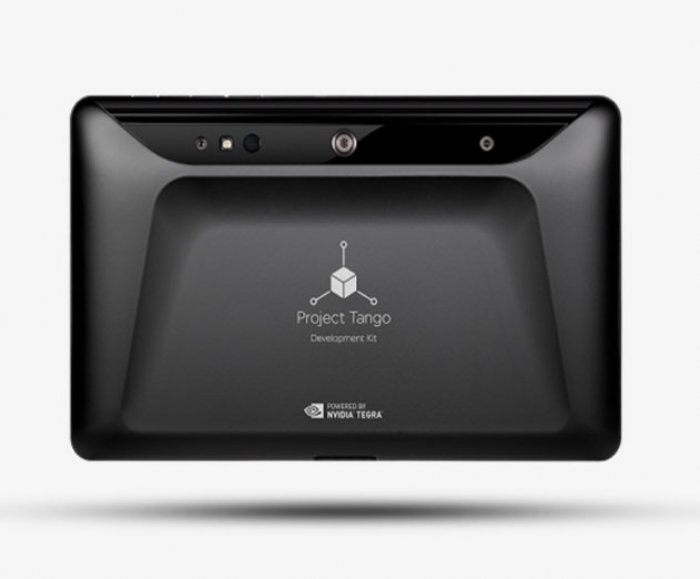 
10,285
Google’s Project Tango Tablet Development Kit, originally released in the US earlier this year, is now available in South Korea and Canada and will be available on August 26 in Denmark, Finland, France, Germany, Ireland, Italy, Norway, Sweden, Switzerland, and the United Kingdom.
Created in collaboration with NVIDIA, the development kit includes the NVIDIA Tegra K1 mobile processor to create a platform designed for computer vision and 3D sensing. Developers can use the development kit to make applications that track full 3-dimensional motion and capture surfaces in the environment bringing motion tracking, depth perception, and area learning to mobile devices.
The development kit offers 4GB of RAM, 128GB of storage, motion tracking camera, integrated depth sensing, WiFi, BTLE, and 4G LTE (availability will depend on region and carrier).plus a wide-angle camera, a depth sensing camera, accurate sensor timestamping, and a software stack that exposes the new computer vision technology to application developers.
So far Google has shipped over 3,000 developer devices so far and developers have already created hundreds of applications that enable users to explore the physical space around them, including precise navigation without GPS, windows into virtual 3D worlds, measurement of physical spaces, and games that know where they are in the room and what’s around them.
Project Tango offers APIs in C and Java, and an SDK for Unity. Google has recently released 13 new software updates that make it easier to create area learning experiences with new capabilities such as high-accuracy and building-scale ADFs, more accurate re-localization, indoor navigation, and GPS/maps alignment. Depth Perception improvements include the addition of real-time textured and Unity meshing. Unity developers can take advantage of an improved Unity lifecycle. The updates have also included improvements in IMU characterization, performance, thermal management and drift-reduction.
Developers in countries where kits are now available can order one through the Google Store.