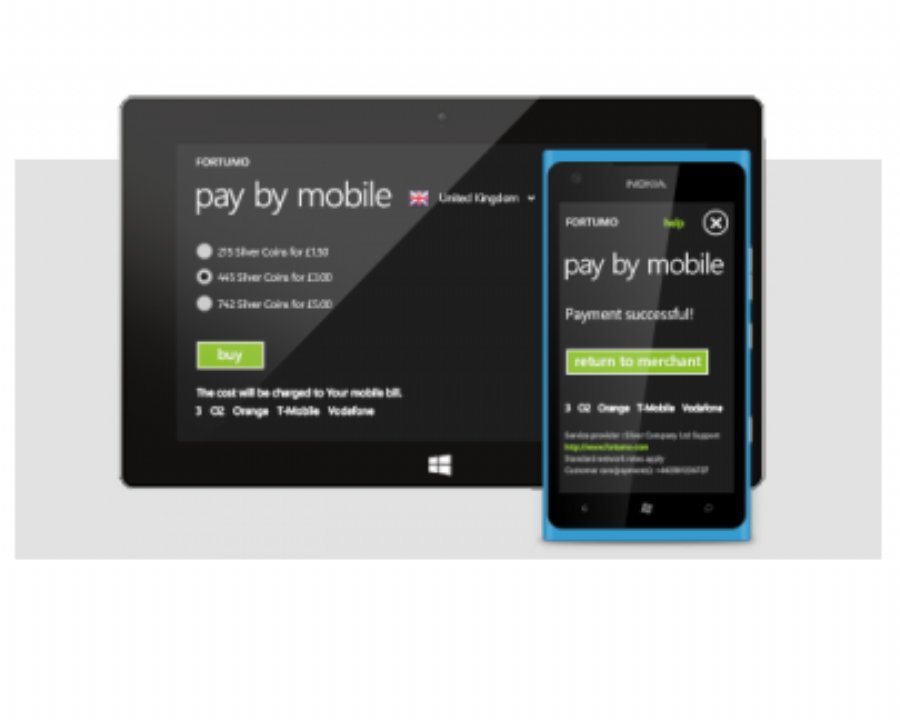 “Our goal is to help developers who are making the move to Windows Phone easily monetize their users globally and with a more broadly accessible, higher converting payment method than credit cards.”

With this update, app and game developers can use a single SDK to activate payments on all Microsoft devices: desktops, laptops and tablets running Windows 8 and smartphones running any version of the Windows Phone operating system. For the end-user buying virtual coins or unlocking new features, payments are completed with 2 simple clicks without having to leave the app, leading to better payment conversion, an improved user experience and increased revenue.“With Windows Phone we are seeing a repetition of what happened when Android launched –developers who were initially cautious in porting their apps to the new operating system are starting to see Windows Phone as a viable source of revenue,” said Martin Koppel, co-founder and Chief Revenue Officer of Fortumo. “Our goal is to help developers who are making the move to Windows Phone easily monetize their users globally and with a more broadly accessible, higher converting payment method than credit cards.”

Mobile payments have two major advantages over credit cards – they have much larger reach and better conversion. In emerging markets, there can be as many as ten times more mobile phone users than credit card owners. This means Fortumo mobile payments give mobile app developers access to consumers who would otherwise not be able to buy or pay for services.

Fortumo's payments system is optimized for all key platforms, including web, mobile web, HTML5, and in-app purchases on both smartphones and tablet devices. The company features payment connectivity with over 300 mobile operators in 80 countries, and has added over 72,000 registered merchants, including several of the world’s largest gaming companies and content publishers, including Rovio and Badoo, over the past 5 years.

Commenting on the free payment processing offer by Fortumo, John Richards, senior director Windows App Marketing for Microsoft has noted: “Windows Store has already seen great traction with developers due to its unprecedented reach in over 200 markets. Microsoft’s flexibility in monetization and industry-leading revenue sharing gives Windows 8 developers greater potential and more control over their revenue. Through the relationship with Fortumo, there are more opportunities for developers to monetize users in emerging markets.”

Additional information about the limited time offer can be found at http://fortumo.com/windows8.

Founded in 2007, Fortumo is the most developer-friendly mobile payments provider, enabling app and game developers to easily monetize users by allowing them to make micro-payments with their mobile phone and charging the amount to their phone bill. Fortumo mobile payments work over the web – on desktop, in mobile web and HTML5 apps – and for in-app purchases on Android, Windows 8 and Windows Phone devices. Fortumo has payment connectivity to over 300 mobile operators in 80 countries, including a number of exclusive direct carrier billing partnerships. Fortumo provides a fast and seamless payment experience, resulting in increased conversion and additional revenue for publishers. Fortumo is backed by Intel Capital and Greycroft Partners and has offices in Estonia, San Francisco and Beijing. For more information on Fortumo, visit http://fortumo.com.Media Contacts:Carmen Hughes