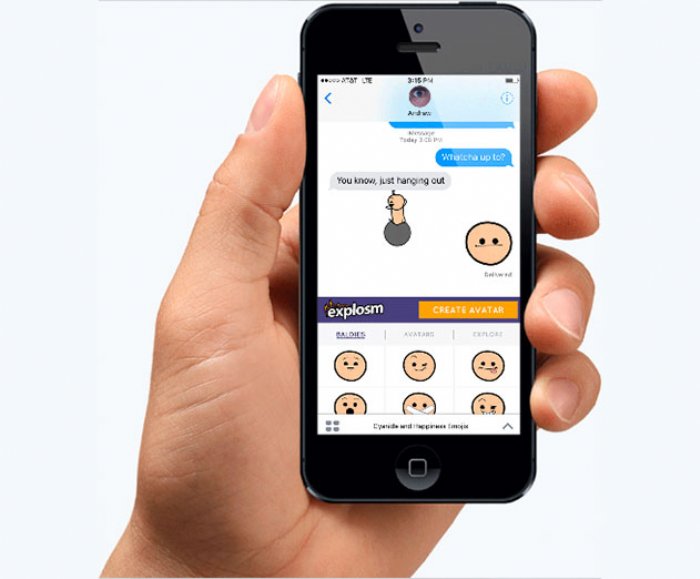 After entertaining fans with their super-popular card game Joking Hazard, Cyanide & Happiness just debuted their custom Emoji and Avatar Creator app on iOS and Android. Packed with the same dark and offensive humor that made Joking Hazard the second most-successful card game in Kickstarter history, the app is the latest release from Explosm - Rob DenBleyker, Kris Wilson, and Dave McElfatrick - who have been on the cutting edge of comedy since 2004 with the Cyanide & Happiness comics, animated series, card games, and various other forms of shenanigans. The app is now available for download.

The free application, available for iOS and Android, comes with two big features - a unique keyboard with Cyanide & Happiness emojis/ filters and a custom avatar generator inspired by their random comic generator.  For anyone who has ever imagined creating a Cyanide & Happiness character or schemed of drawing a friend as one, the custom avatar generator lets them do so! Users can pick from a wide range of skin tones, body shapes, hand gestures, hairstyles, accessories and even drinks to create their chosen avatar. They can also add a real face to the avatar, to add even further personalization. Fans can share these custom avatars in text messages and in Twitter, Facebook, Instagram, Whatsapp, etc.

Avatars that are shared most frequently will receive special recognition within the application and elsewhere. Let the competition begin!

Cyanide & Happiness will continue to add special content to the app. Additional content and capabilities will be also made available to fans through in-app purchases.

The app also allows users access to a set of unique Cyanide & Happiness emojis, GIFs, animated filters and stickers that can be used in any text conversation. The app also comes with two additional sets of content - the Club pack and Geek pack - available as in-app purchases. Users can channel their inner nerd with magic wands, gamer accessories, etc. when they buy the Geek pack, and will get things like popped collars and cool-guy shades from the Club pack. More sets of content will be added over time based on fan requests.

Cyanide & Happiness is known for creating boundary-pushing products around their content. Last year, the team crowdfunded their card game Joking Hazard on Kickstarter, generating $3.2MM in support from fans during a 30-day campaign. Over 65K games were sold. The Kickstarter campaign engaged with fans through several unique challenges and the C&H team plans to continue the same level of engagement, especially through the avatar generator.