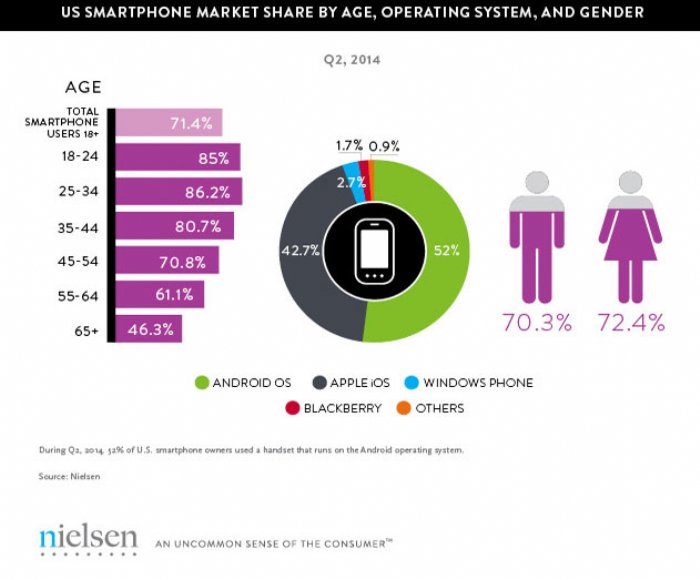 
1,642
Each app publisher knows there is a sweet spot from a user perspective, and there are an endless number of analytics solutions that help define who those users are.
However, societal trends can provide big picture insight in identifying trends that may provide new opportunities. Neilson has recently analyzed Millennials as a group and is providing insight into how to market to this group.
There is not a universal consensus on the actual definition of Millennials, however Neilson uses this definition: a group born between 1977-1995 (also known as Generation Y). Nielson further breaks the group down to Younger Millennials (18-27) and Older Millennials (28-36). Millennials represent 77 million people and make up 24 percent of the U.S. population.
The information presented here is based on Nielsen’s monthly survey of 30,000+ mobile subscribers aged 13+ in the U.S. Mobile owners are asked to identify their primary mobile handset by manufacturer and model, which are weighted to be demographically representative of mobile subscribers in the U.S. Smartphone penetration reflects all models with a high-level operating system (including Apple iOS, Android, Windows and Blackberry).
Here is a snapshot of Nielson’s findings on Millennials:
Millennials are one of the largest population segments in the U.S., totaling about 77 million, on par with Baby Boomers. And these young consumers are the largest segment of smartphone owners. In the second-quarter 2014, 85% of Millennials aged 18-24 own devices and 86% aged 25-34 own them, an increase from 77% and 80%, respectively, in second-quarter 2013.
While age plays a role in smartphone ownership, this technology doesn’t have a gender divide.
Men and women in the U.S. own smartphones almost equally, with 70% of men owning these devices and 72% of women as of the second-quarter 2014.
In second-quarter 2014, Android was once again the top operating system, with over half of U.S. smartphones (52%) running the operating system. Apple, meanwhile, remained the top smartphone manufacturer with 43% of Americans owning an iPhone.