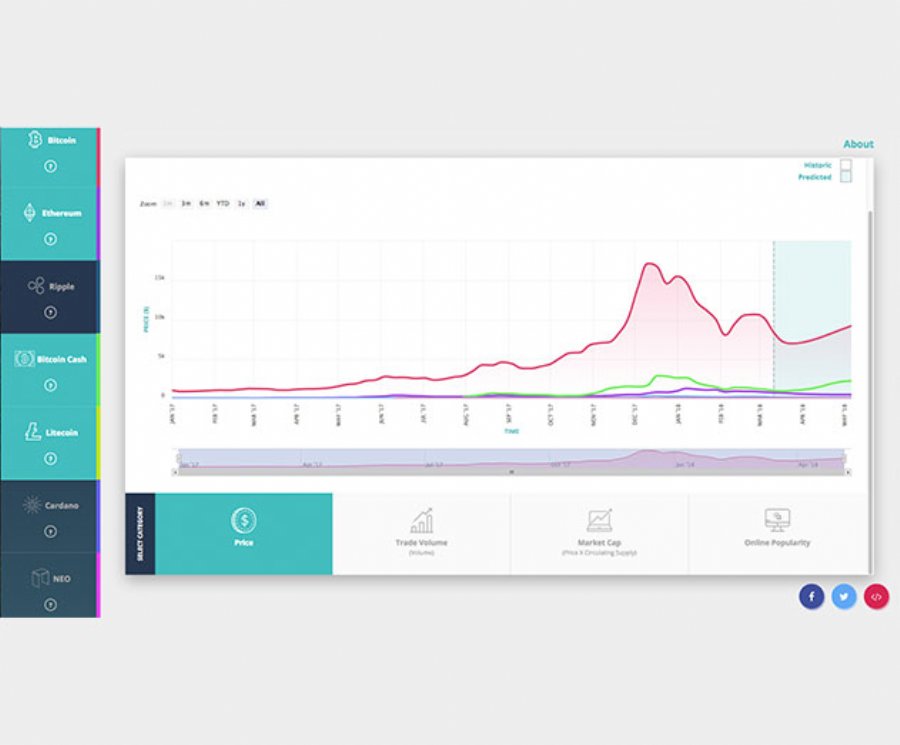 Cryptocurrency: Past, Present and Future delivers price change and market cap change predictions for Spring 2018 alongside a comprehensive cryptocurrency data visualization tool enabled with their own in-house algorithm.

A brand new tool could be just what you need to make the best investment choices. Using detailed historical data across the past 14 months, Cryptocurrencies: Past, Present and Future, a company that makes predictions for the future of the top 10 virtual currencies.

Using an exclusive algorithm, Cryptocurrency predictor feeds historical data on price, trade volume, market cap and online popularity through a variety of analytical tools, including a Recurrent Neural Network, to forecast the exact rise and fall of ten chart-topping cryptocurrencies.

The ten virtual currencies monitored within the piece include:

If you’re concerned about being overwhelmed by numbers, all of the cryptocurrencies are explained in a handy, bite-size format. What’s more, the numerical information is displayed in easy-to-read data visualizations, allowing you to compare cryptocurrencies side-by-side. 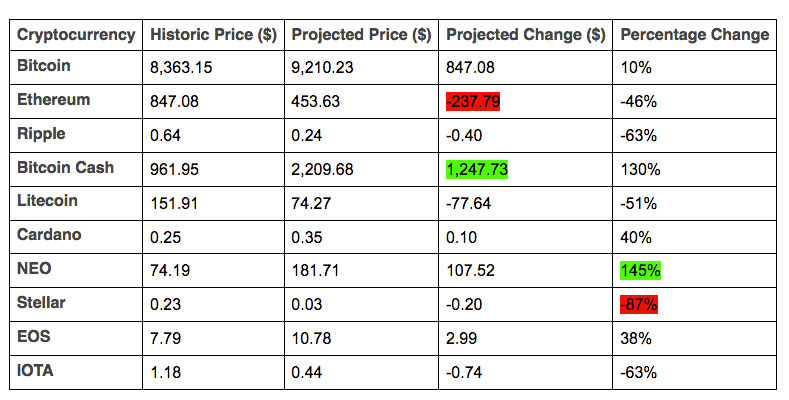 Despite the value of cryptocurrencies being constantly on the move, the algorithm reveals that Bitcoin Cash will skyrocket by $1,247.73 per unit to $2,209.68 if it continues on its predicted path - so is definitely one to look at if you’re tempted to invest.

Similarly, Chinese-produced NEO looks another strong contender for most valuable currency in the near future, with a projected increase of 145%.

Ethereum, meanwhile, is highly encouraged to be avoided, since it is charted to lose the most value, falling by a staggering $237.79 per unit. It doesn’t have the biggest percentage drop, though. That dubious honour belongs to Stellar, which is predicted to fall a shocking 87% in the next two months.

With Market Cap (Price multiplied by Circulating Supply), we’d expect the price to somewhat influence the projected value and percentage change. But what is even more interesting is how much changes in price influence the Market Cap.

As you would expect, Bitcoin Cash’s ceiling looks ready to rocket up by more than $20 billion to accommodate an increase in price - as we saw from the previous table. Similarly, NEO’s leap in unit value will be accompanied by the Market Cap expanding by an impressive 162%.

It’s more bad news for both Ethereum founder, Vitalik Buterin and Stellar creator Jed McCaleb though - as Ethereum’s overall cap is projected to plummet by $26 billion to reflect the drop in price, along with Stellar bottoming out with a devastating 90% fall.