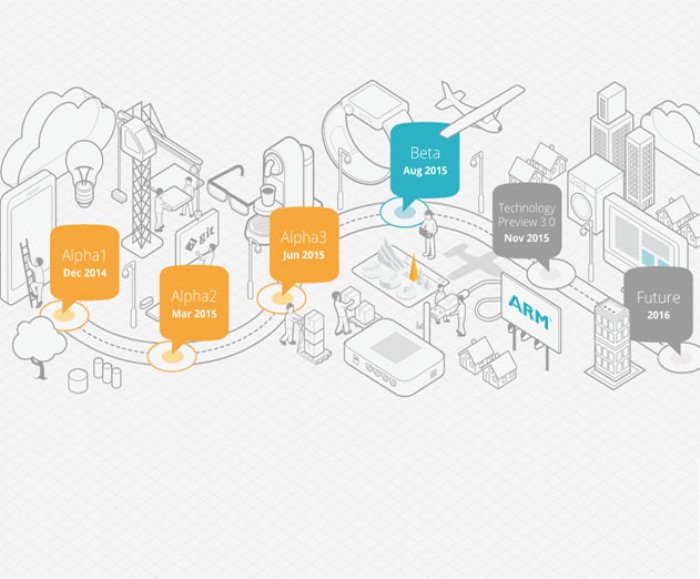 ARM mbed OS for the IoT Now In Beta


49,015
ARM has announced the ARM mbed OS is now available for beta testing. In addition to the OS release, ARM has announced the mbed Device Connector Beta, mbed Client Beta, mbed Device Server 2.5, and mbed TLS 2.1.0 are scheduled to be released over the next few weeks.
Here is a full rundown of the releases:
mbed OS
The beta mbed OS is an open source embedded operating system for the IoT that accelerates the process of moving from initial idea to deployed product by providing a core operating system, security foundations, standards based communication capabilities, and drivers for sensors, I/O devices and connectivity.
mbed Device Connector
The mbed Device Connector is a new online service offered in beta that provides developers with the ability to prototype and test applications in the field. It offers an opportunity to connect IoT devices to the cloud without having to build the infrastructure, while providing the capacity developers require to prove IoT applications at scale.
mbed Device Server
The mbed Device Server 2.5 is a middleware that connects IoT devices to web applications, allowing the ability to deploy mbed enabled services. It enables communication and device management for developing and deploying enterprise applications based on open standards.
mbed TLS
The mbed TLS 2.1.0 simplifies development by providing developers with the ability to include cryptographic and TLS/DTLS capabilities in their products. mbed TLS will now be delivered under the Apache 2.0 license.
mbed Client
The beta mbed Client helps non-mbed OS based devices to connect to the mbed Device Connector, mbed Device Server and build web applications using cloud services. It implements a subset of mbed OS functionality and is optimized for constrained networks and devices. It uses the Constrained Application Protocol (CoAP) to provide energy-efficient communication as well as supporting communication security using mbed TLS and device management via OMA LWM2M. All this functionality is provided via high level C++ APIs.