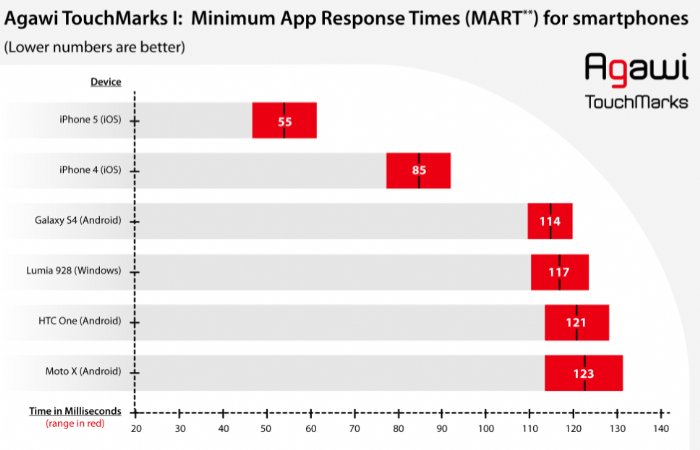 Menlo Park, CA -- September 19, 2013 -- Agawi, the company that introduced streaming mobile applications from the cloud to touch devices, today announced the iPhone 5 trounces the competition with the most responsive touchscreen in the industry.

Agawi’s TouchMarks I measures the Minimum App Response Time scores, or MART scores, and the results are surprising. The iPhone 5, with a response time of only 54 milliseconds, is more responsive by a factor of more than 2X when compared to Microsoft’s Lumia, Google’s Moto X, Samsung’s Galaxy S4 and other popular smartphones. In fact even a two-year old iPhone 4 with a MART score of 74 milliseconds does better than the latest phones from the other manufacturers. “Minimum” in MART score is defined by the fact that the benchmark uses the lightest possible app that responds “immediately” to touch, without doing anything in the app.

Agawi is making the benchmark, and the methodology, openly available on its website, and invites the industry to join in outlining future TouchMarks benchmarks that it plans to publish.

“App responsiveness is judged by how quickly the app can respond to your inputs,” said Rohan Relan, co-founder and CEO of Agawi. “Smartphones with touchscreens that have lower MART scores feel snappier. This is probably why, to many users, the iPhone keyboard feels more responsive than an Android phone keyboard.”

How TouchMarks Measures Response Time Agawi specializes in providing technology that runs rich, interactive apps in the cloud and streams them to iOS, Android and WP8 mobile devices. In order to make sure that adding cloud based processing to a smartphone app is acceptable to an end user, Agawi’s team of engineers from Stanford and Netflix had to build a device they call a Touchscope to measure the response times of touchscreens to an accuracy level of +/-4 ms to get the MART score of the device, and then add the cloud processing response time to calculate the end-to-end user perceived response time.