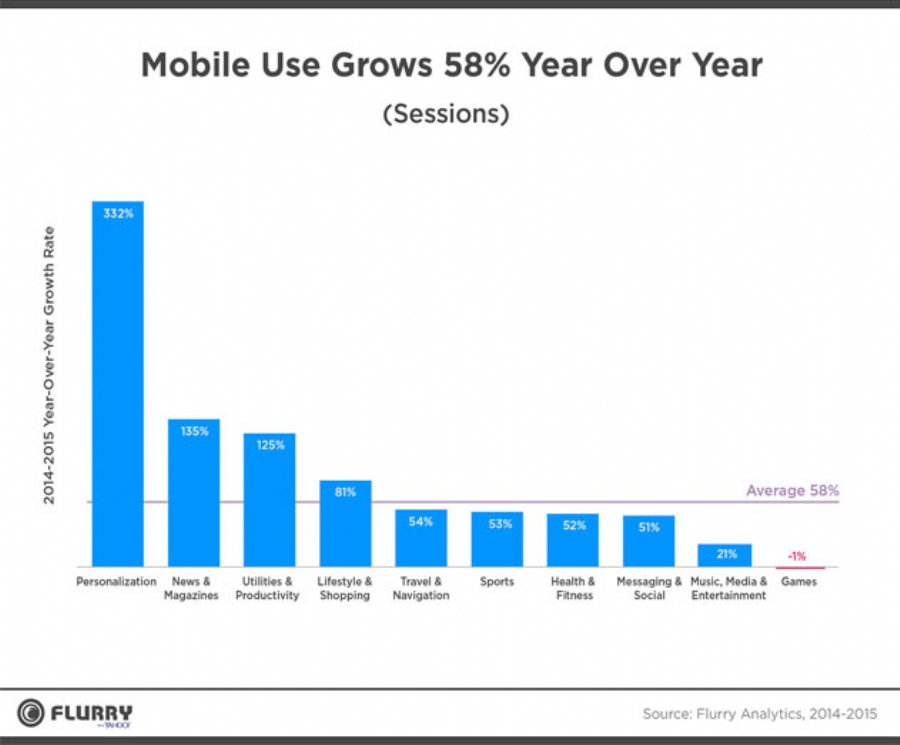 
15,946
The numbers are staggering. Mobile app usage last year was up 58%. Time spent on phablets grew 334% year-over-year. And the high flying mobile usage stats just keep rolling in, according to a recent report from Yahoo’s Flurry in its annual “State of Mobile” report.
In the context of the 58% overall growth of app usage, Flurry defines app usage as a user opening an app and recording a “session.” With the exception of the Games category, every app category posted year-over-year growth with Personalization, News & Magazines and Productivity leading the way with triple-digit growth. The data was taken from Flurry’s insight into app engagement for 2.1 billion smart devices and 3.2 trillion sessions.

Among the report findings:

- Existing users versus new users: Flurry estimates that 40% of the 58% total growth in sessions came from existing users in 2015, compared to 20% in 2014 and 10% in 2013.
- Phablets. On their way to becoming the dominant form factor, time spent on phablets grew 334% year-over-year (2.9 times more than the average), compared to 117% for all form factors.
- Personalization, News and Magazine and Productivity apps: All experienced triple-digit growth.
- Personalization apps: Such as Android lock-screens and Emoji keyboards grew over 300% in 2015.
- News and Magazine apps grew 141% in 2015: This growth aligns with an ongoing shift in media consumption from television and PCs to smartphones in general, and phablets in particular.
- Productivity apps grow 119%: Continuing a trend that started in 2014, more consumers, especially teens and college students, are using their smartphones, phablets and tablets as their primary computing device and their sole device to access email and other productivity apps, like Google Docs, Quip, Slack and the Microsoft productivity suite.
-  Lifestyle and Shopping apps grew 80% in 2015: Following a 174% growth in 2014, the growth rate shows the continuing popularity of mobile commerce which accounts for 33% of online commerce in the US and 40% of online commerce on a worldwide basis.