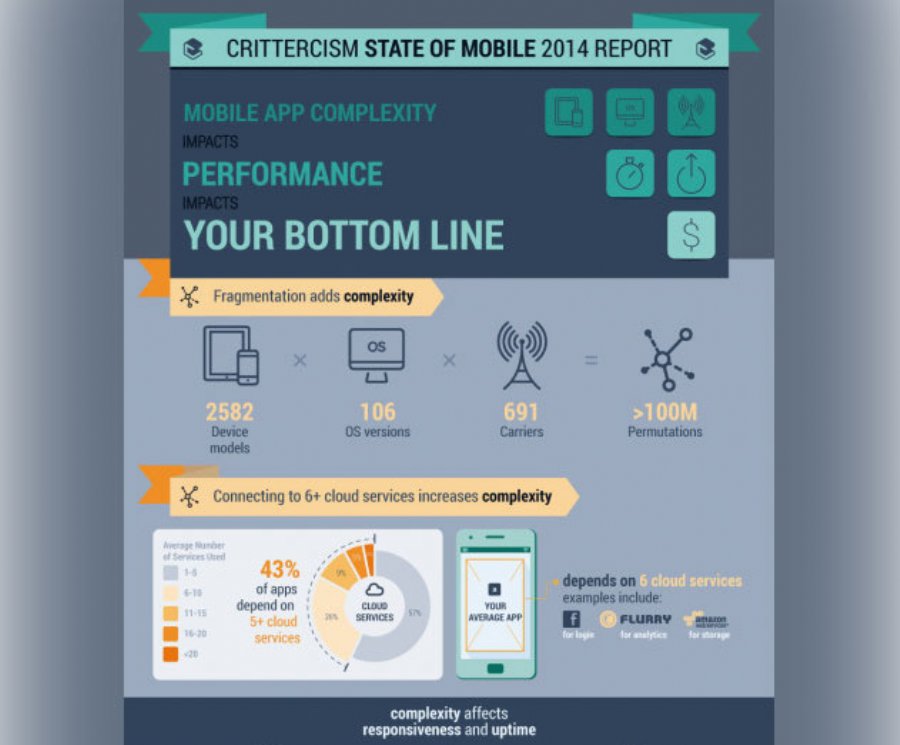 App Performance Issues Could Be Killing Your Potential

If your app is floundering, do you know why? Performance issues may be the key.

Perhaps you should ask yourself, how does my app perform compared to other apps in my industry? What kind of uptime or crash rates should I expect on iOS or on Android? If I enter a new geographic market, what impact will it have on my app’s responsiveness? What latencies or error rates should expect from my cloud services deliver to my app? How does performance vary across popular 3rd party web services my app depends on?
To learn how to ask the right questions, you should consider reading a new publication from Crittercism, The Mobile Experience Benchmark report, which establishes benchmarks for the performance of mobile apps, operating systems and devices across the globe.
To generate the report Crittercism examined data from one billion monthly active users who use tens of thousands of apps monitored by the company.
The report begins by exploring why delivering top performing mobile apps is difficult.  In a nutshell, there is an incredible complexity of the mobile ecosystem across OS versions, devices, carriers, app versions, and cloud dependencies leads to over a hundred million permutations. This complexity makes it difficult to test every user’s situation and optimize performance.
Crittercism discusses what they have identified as the two core pillars of app performance one needs to track and optimize are mobile app uptime and app responsiveness. Their data shows that mobile app uptime, meaning the percent of usage that an app doesn’t crash, must be above 99% for your app to be competitive in the app marketplace. In addition, responsiveness of your app’s service calls requires a latency of under one second to satisfy users. Yet their data shows many service calls don’t meet that bar.
When looking at specific app markets, they found some interesting facts.
The iOS Ecosystem
As one of the most popular mobile operating systems in the world today, Crittercism looks at Apple's mobile ecosystem from OS and device levels to gauge performance:
iOS: iOS 7.1 is the most stable iOS version with a crash rate well lower than that of iOS 7.0 and iOS 6. The iPhone 5 remains the most stable iPhone, enjoying a 15% better crash rate than the iPhone 5s. Across the board, iPhones have superior crash rates to their iPad counterparts
The Android Ecosystem
Gingerbread has the highest crash rate for Android, more than double KitKat, Ice Cream Sandwich and Jelly Bean. The two most recent versions of Samsung's popular Galaxy S series smartphone, the S4 and S3, enjoy the best crash rates of Android smartphones. Similar to Apple, Android smartphones are considerably more stable than their tablet counterparts.
The Great White Mobile North
Mobile is becoming an increasingly popular method for taking companies international at breakneck speed, but not all geographies are created equal when it comes to mobile. Crittercism compared app performance across different countries and regions and found that Canada and Japan are the leaders with the fastest response times. Specific findings from the report include the fact that Canada and Japan both outperform the US response times. China, Australia and Europe users also enjoy fast response times on their mobile devices. As would be expected, developing regions around the globe see the most lag from mobile apps – the Middle East, Southeast Asia and Africa all experience significant delays in response time, but India takes home last prize with average response time more than twice what's seen in the US.