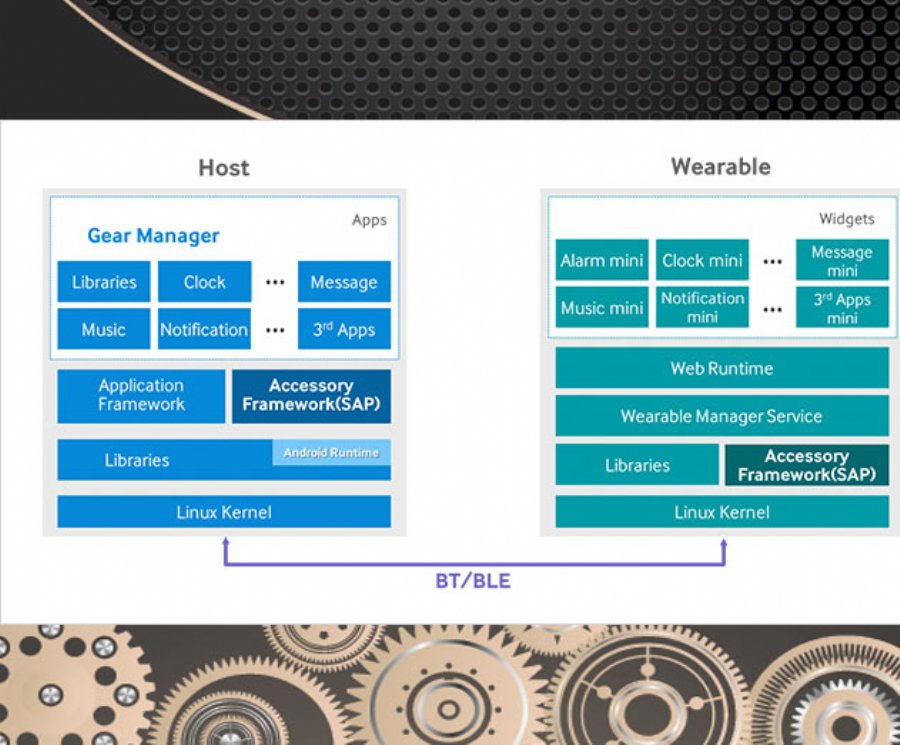 
5,081
Samsung has announced that Tizen Software Development Kit (SDK) for Wearables is now available. Samsung is targeting developers to create apps for the Samsung Gear 2 and Gear 2 Neo and is promoting over 100 apps that are now available for these devices.
The Tizen SDK for Wearables is a comprehensive set of tools for developing Samsung Gear applications. It consists of the Tizen Wearable IDE, Emulator, tool-chain, sample applications, and documentation. The Tizen SDK for Wearable runs on Windows, Ubuntu, and Mac OS X.
Architecture
Wearable devices are paired with a host device, such as a smartphone or connected tablet, on which they depend for wider connectivity and various services:
The Gear Manager manages sending and configuring widgets on the wearable device.
The Wearable Manager Service receives and installs widgets on the wearable device, and forwards setting information to the Gear Manager.
SAP (Samsung Accessory Protocol) provides a connection between the host and wearable devices and supports various connectivity technologies, such as Wi-Fi, Bluetooth classic, and Bluetooth Low Energy (BLE).
Apps also consist of 2 parts: host applications and wearable-side widgets. Usually, a wearable-side widget and a corresponding application running on the host device operate as a provider and consumer pair. Host applications are developed using the Android APIs, whereas the wearable-side widgets are developed using a Tizen wearable platform.
Application Package Structure
The Tizen SDK for Wearable allows developers to develop the following types of Gear applications: Linked (Master-Follower), Integrated, and Standalone.
Gear applications for the Linked (Master-Follower) and Integrated type consist of a host-side application package (APK) and a wearable-side widget, while gear applications for the Standalone type are only wearable-side widgets.
Linked (Master-Follower) Type - The linked Gear application is not included with the general host application. Developers must install the general host application and the wearable-side widget separately.
Integrated Type - In an integrated Gear application, the host-side APK contains the general host application. When developers download an integrated Gear application, the general host application in the host-side APK is installed simultaneously with the wearable-side widget.
Standalone Type - Developers can use the standalone type, such as a Clock app, when the Gear application does not need a general host application, and can operate independently.
Certification Process for Testing Apps on Actual Devices
Code signing protects an app from modification and ensures ownership during version upgrade process.
Code signing is used in combination with device information. This ensures a signed application runs only on the test devices which are specified. It ensures an application cannot be distributed by someone else even though the application package is leaked.
To sign code for an actual device, developers need to create a certificate. Developers can create a CSR(Certificate Signing Request) file and RSA key pair by using the Tizen IDE for Wearable with the actual device ID to test.
Developers can request a sign to a CSR to certificate authority(CA) by sending CSR file then, CA will return the signed certificate_registration.xml file. This mailing exchange process requires PGP tool to secure the information.
The last step is registering the certificate_registration.xml file to the IDE. It will use RSA key in the host which is created at first step and generate a final certificate which enables the ability to test in actual devices.
App Distribution through Samsung Apps
Gear Applications will be distributed through a slightly different Samsung Apps platform. A special Samsung Apps only for Samsung Gear has been constructed inside the Gear manager. Without getting confused with mobile apps, Gear users can easily find and download the specific Gear apps they want through this separate Samsung Apps.
The app distribution process includes: 1) Connect to Samsung Apps Seller Office; 2) Set up an account and login; 3) Prepare and submit app through ‘Add New Application’ menu; and 4) App distribution will be completed after the app is reviewed.