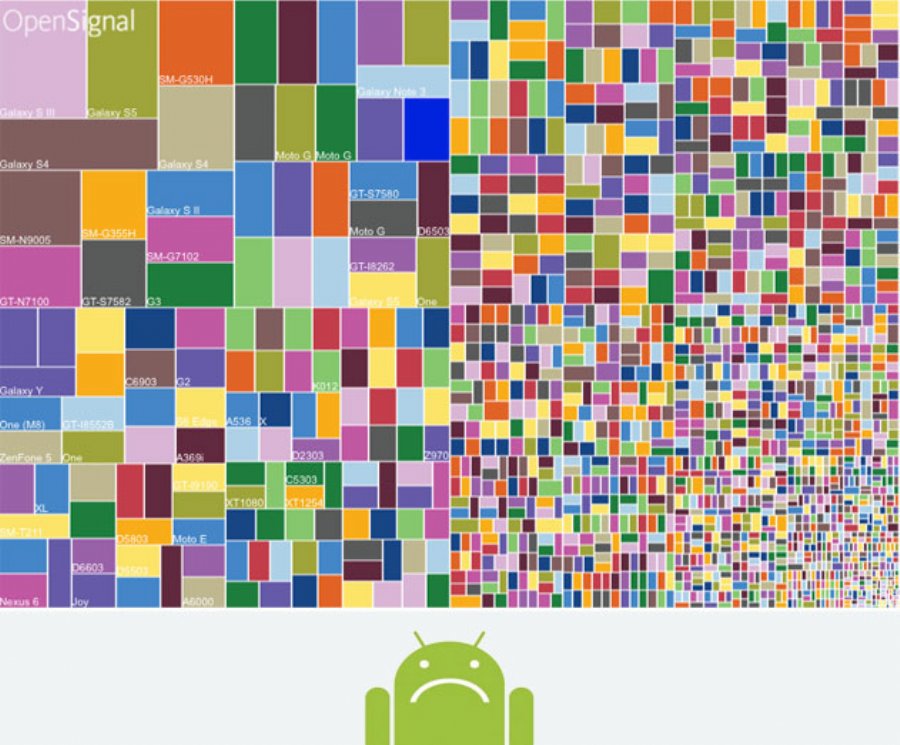 
17,947
Is your Android app ready to take on over 24,000 different devices? According to its most recent report on Android fragmentation, OpenSignal tracked the downloads of the OpenSignal app over the last two months and found over 24,000 distinct devices have access to a developer’s Android app, making optimization a nightmare. The company reports that in two years Android fragmentation has more than doubled from the 11,868 devices they tracked in 2013.
The company reports dramatic changes that have occurred in the Android ecosystem over the past few years which include: a huge increase in observed devices; great proliferation in manufacturers; and the rise of embedded physical and virtual sensors. Adding to the fragmentation challenge include the fact that screens are bigger, CPUs have more cores and mobile devices now contain more RAM than the average desktop not too long ago.
From an OS standpoint, the study shows that the Android operating system itself continues to be extremely fragmented. OpenSignal did report that they have seen a slight reduction in fragmentation over the past year, with the market share of the dominant API version (in this case KitKat) having risen over the past 12 months.
OpenSignal points out that, “Key to the success of any app is getting the UI right and Android presents two particular challenges to developers in this regard. Firstly, brands have a tendency to produce their own variants on the system UI (Samsung’s Touchwhizz and the HTC Sense being two such examples) which can change the look of various default elements. Secondly, no other smartphone/tablet platform boasts such a proliferation of different screen sizes. One big change to the graphic this year is the inclusion of the enormous Slate 21 - which absolutely dwarfs all other Android devices we have seen this year (and all iOS devices also).”