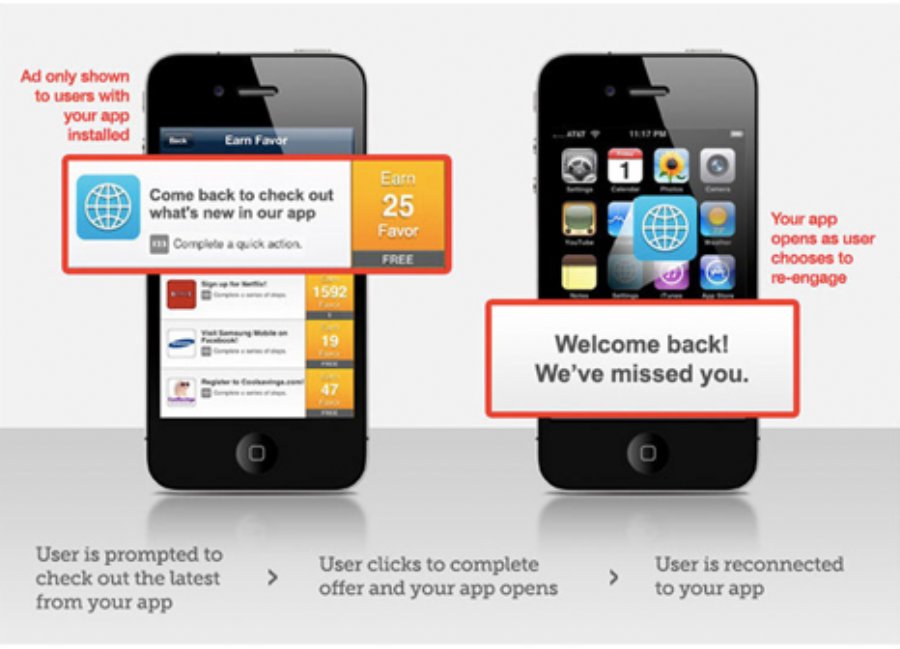 
26,814
Executives from Tapjoy, ChartBoost and others discuss their different and sometimes controversial approaches to app monetization

If this hasn't happened to you yet, it will soon: you're playing a mobile game and you see an in-app ad for another game inside it. Normally you might ignore such things, but this one is offering a reward--free virtual currency, perhaps--for those who click and download the app. Behind the scenes, the developer who authorizes the ad in his or her game gets a fee, as do the developer doing the advertising and the third-party firm orchestrating the entire thing.

Ad networks have become a common means of using up excess inventory of Web traffic on all kinds of sites, but for mobile game developers it represents a new avenue both for monetization and, potentially, discovery of their apps. One of the most successful--and controversial-- of these is Tapjoy, which began as a developer and was later acquired by OfferPal in 2010. What Tapjoy refers to as a "mobile value exchange" between consumers, developers and advertisers, app store vendors like Apple call incentivized ads, and Apple prohibited them in 2011.

However Tapjoy, which claims some 13 million registered users, has updated its SDK and has been using HTML5 Web pages in apps that get around the issue and says that Apple continues to approve and feature many of the apps on its network. That hasn't stopped TechCrunch founder Michael Arrington from lambasting Tapjoy in the blogosphere recently, drawing a response from Tapjoy's CEO. The dust-up is an example of how the mobile gaming industry is still trying to figure out the best way to earn a profit while complying with app stores' terms of service.

In an interview with FierceDeveloper, Chris Akhavan, Tapjoy's vice president and general manager of partnerships and strategic promotions, said the whole point of the company's approach was to avoid the disruptive aspect of traditional in-app advertising. He describes what Tapjoy offers as "premium content" that gives users a reason for getting involved with the ad.

"There's a lot of inaccurate information out there about the model," he said. "This notion of just generating a lot of volume to get up in the charts? That is very much a two-years-ago thing. The model has evolved beyond a pay-per-install model to something that really has the user's attention. The key thing here is that everyone in the equation is benefiting." This includes the app store, the user and most of all the developers, he said.

Mark Wang may be one example. The co-founder and chief marketing officer at GameHive, Wang said his Toronto-based firm joined Tapjoy's network late last year and has steadily grown to be among their top-tier partners, featuring ads in titles such as Antrim Escape, Kick the Boss and others. So far, he said, it has been a value source of monetization.

"Basically, our users can try other services or games in exchange of in-app currency. As we committed more and more to a free-to-play strategy, we realized that advertising revenue has to be part of the overall revenue stream," Wang said. "There are some similar firms that have been spawned after Tapjoy made its name, but we found Tapjoy still has the widest reach among all the others."

Some of the alternatives to Tapjoy say that their approach offers better value and a more straightforward experience for developers. For instance ChartBoost, based in San Francisco, bills itself as a "by developers, for developers" platform for internally cross-promoting apps and games, directly cross-promoting with other apps through a brokerage model, or promoting via a network. Clay Kellogg, ChartBoost's chief revenue officer, said the problem with traditional ad networks is that they look at how many advertisements you can fit into a game,and the impressions that are served up. This might be a good metric for social networks and chat communities, but not mobile games, he said. ChartBoost, on the other hand, measures game sessions rather than impressions, which means campaigns can be tweaked more effectively depending on an individual developer's needs.

Kellogg also warned that most ad networks offer merely a one-way exchange that benefits themselves. "Once you turn your inventory over to them, they return what they want," he said. "You are forced to trust that they are looking out for your best interest."

New York-based Tylted, meanwhile, is taking another route entirely, creating a sort of game-within-an-ad called GameDrop, which can be used to carry an offer or simply acquire new customers. The GameDrop games are HTML5-based and reside on Tylted's server, which means they can include interstitials, rich media and video."Our initial rollout of this was with our content and third-party developers we've signed to our platform," explained CEO Lon Otremba. "Our plan is that very soon, we'll open this up to any developer who wants to use it."

More mobile game developers may find themselves considering one of these types of services, in part because they are increasingly challenged to find ways to market themselves. In a report released last week called "Mobile Games: Driving Discovery," WebMediaBrands Inc.'s Inside Network concluded that counting on app stores is the wrong idea. According to the firm's research, 23 percent of consumers base their gaming installs on recommendations from the media and friends compared to the 19 percent who look at app stores' reviews. Billy Pidgeon, a senior analyst at Inside Network, said promotion and distribution networks can help apps get discovered, but it will cost developers to use them effectively.

"Often the primary gain from using promotional distribution networks is limited to the higher visibility that's gained by a boosted position in app store listings," he said. Cross-promotion ad networks could help in a different way, he added, by improving discoverability for some apps while providing revenue to the app with the embedded ad.

The mobile ad firms, meanwhile, are fully aware that game developers and publishers will have increasingly higher expectations in 2013 and beyond.

"There was a time when you'd see marketers throwing their budget around and not looking at how each channel was performing," said TapJoy's Akhavan. "The industry is now becoming much more data-driven and performance-driven. They're spending across multiple ad networks and optimizing their spend to what delivers."

Building additional tools will also be key. TapJoy recently launched Reconnect, a program to help re-engage users who played a game a few times and then abandoned it. Kellogg said ChartBoost also intends to expand its portfolio next year.

"We think that the winners moving forward will be the service providers who can help developers in all areas of their business: promotion, monetization, optimization, retention," he said.

The competition among ad networks may become more intense than anything that anyone plays on a smartphone.