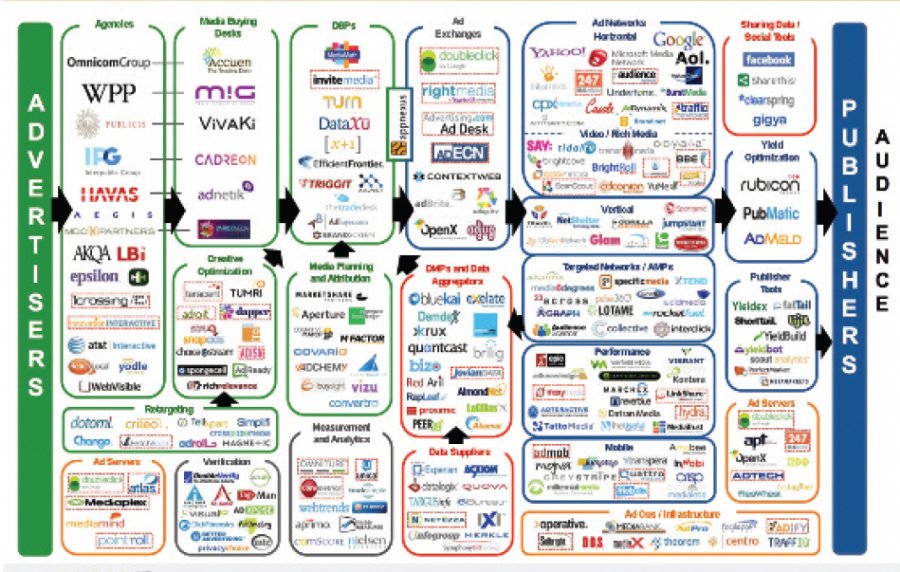 
3,813
Most advertising industry long-timers remember the infographic that was the first to comprehensively detail the landscape of interactive advertising in a somewhat organized fashion. I remember seeing it and thinking “It’s getting a bit crowded in here.”

Over the last decade, the era of the ad network has come – and almost gone. Around the turn of this century, prospective businessmen sprinted their way into the middle, placing themselves between the creators of content and makers of products, directing traffic while taking their percentage.

At the time, there were few – but when news of the bounty spread, the few became many. One amazing gift the age of the ad network gave us was targeting. By becoming a filter through which millions upon millions of pieces of user data flows through, the organization and use of that data became the next race. Ad networks clamored and competed, each wanting to best centralize, organize and monetize – and to scale the matching of that data to advertisements. Once specific audiences could be targeted, distinct trends surfaced.

This opened up a world of possibility, greatly improving the likelihood that the right ad would reach the right person. For the first time, an advertiser could pinpoint a customer with laser accuracy. The push for size, market share, and publisher/advertiser base became a push for the best technology.

Historically, the race for innovation in any market has almost always been a good thing, and in the advertising industry where the models, methods and medium are always changing, the only consistency has been innovation.

Beginning around six years ago, aggregation became key. The ad networks provided advertisers with targeting, performance and scale, and for a while this worked well. But eventually, advertisers began to realize that the networks were either taking too much margin or were not as efficient as they could be. Enter Ad Exchanges, which had been simmering just below the surface for several years.

Exchanges were basically an offshoot of ad networks, but they never really took off until the rise of their progeny: The DSP and the SSP. This is where some of us who have been in the market for awhile see the current ad network landscape migrating next.

The DSP model is based on that of the ad network. DSPs give the ad buyer more control by enabling easy management of multiple ad exchange and data exchange accounts through a single interface. Marketers can bid on ad space in real-time, and optimize based on set KPIs.

DSPs incorporate even more facets originally offered by the ad network: Access to inventory, laser-focused targeting, ad serving and tracking – in addition to the real-time bidding and optimization. A single interface simplifies everything.

SSPs were created to provide publishers with a more streamlined approach to working with the hundreds of networks that were competing for publisher inventory. Many large Web publishers use SSPs to optimize and automate the selling of their inventories. The efficiency, automation and security of SSPs make them attractive, as does the insight they provide into revenue streams and audiences.

A sea of change and a new way of thinking occurred sometime toward the end of last year. Year-end numbers came out and as 2013 projections were announced, it was clear the world had awakened to the opportunity offered by mobile. Affiliate networks scrambled to rebrand themselves as mobile marketing agencies and everyone wanted in on the action.

This anytime-anywhere and always-connected world we’re living in suddenly justified the concept of targeting – and not just for the advertiser. Even consumers are warming up to targeting. After all, it’s human to want more – and more – and the mobile phone was the first and best device to help us achieve more. Our "give me my privacy" attitude started to give way at a landslide pace to an "if you’re going to serve me ads make them relevant" attitude. And the advertising industry is going to knock down walls to serve ads, so it could be said that for the first time, advertisers and consumers are taking what they want from each other and both are happy about it.

This brings us to the next advent in advertising, which is only just now starting to see its day on mobile.

RTB is a method of selling and buying display advertising one impression at a time, and as its name suggests, in real-time. The ability of a DSP or ad exchange to manage the process by which ads are served, depending on which relevant advertising bids highest for a target Web page visitor, is modern advertising at its best. Web and mobile advertisers will clamor for a 35-year-old woman in California to show her sunscreen, and within a flash, the one analyzed to be the highest bidder for her attention has its ad displayed.

Heralded by many as the next mobile ad breakthrough, the potential of RTB for mobile commands attention. The model helps publishers, who are flush with inventory due to endless mobile apps and website offer their potential ad space to the best-fit buyers.

Providing a much needed organizational architecture to the nascent mobile ecosystem, it’s a powerful, organized sales enabler for publishers, helping the advertisers best reach their target audiences. Advertisers have to outbid others, but they are reaching their intended audiences.

The transparency and scalability provided by RTB makes it as useful for mobile as it is to the Web. Mobile advertisers can’t use cookies to track users’ activities on the mobile web, but RTB can leverage massive amounts of data for highly-targeted mobile marketing on the one medium through which the consumer audience wants to be targeted with that which interests them most.

At times, the ad industry has both followed and led the medium by which it was delivered. However, throughout history, the product or service has always existed first, and the ad model that supported it has come afterward.

At TapIt by Phunware, we think the mobile app market needs to reverse that order. The mobile app market is projected to be worth $25 billion by 2015. Millions of people worldwide are seeking an education on how to make a living by developing apps. Add to that the increasing ubiquity of the smartphone and the world’s growing dependence on mobile apps to get through each day, and it’s clear that mobile apps are the next big economy.

With mobile apps in such high demand, shouldn’t the developer lead with a monetization strategy? After all, doesn’t a developer want an app downloaded, used, lauded, beloved and recommended?

To best appeal to all audiences, developers should first be clear on what drives an audience to determine how to best market to that audience.

Here are four key questions and answers developers should ask themselves to formulate their strategies, which should focus first and foremost on monetization.

HOW CAN I AVOID MY APP BEING A LOW-VOLUME APP?

Pick a niche and own it. There is an entire app devoted to women with curly hair. There are passionate people interested in taking a 50-mile run through the Mojave. There are hedge fund managers with five high net worth clients total. The medical field has tremendous potential for mobile advertising, but many discount it given low volume in specialized apps.

The point is, developers need to offer something – content – via the app, to makes its target users want to stick around, and come back again and again. Developers don't have to collect pennies to make dollars; they can also collect dollars. The trick is to pick a specific audience and focus on it.

Relevant, contextual advertising is effective in any kind of app, but paid apps may have an advertising disadvantage, as users have typically paid money to unlock the content contained within the app. Users may feel duped, become unhappy with the overall user experience, or worse yet, delete an app.

WHAT IS THE BEST TYPE OF AD FOR THE MOBILE ARENA?

As with any type of advertising, engagement is key. Beyond standard display ads or take over ads, we see more positive returns with rich media, native and hyper-local ads. TapIt by Phunware sees mobile going native, with a number of different advertising models springing out from that to become as standard as banner advertising is today.

Irrespective of the specific ad unit, I believe that a good blend of all ad units should be mixed within the user experience, and then measured for yield by each unit. Ideally, the goal is to create an experience with minimal clutter and interruption, with the most powerful engagement and yield from an app’s real estate.

HOW AND WHERE DO I PLACE AN AD?

First off, serving ads within an app is always appropriate unless there is an agreement or belief that there will be no advertising. Where and how to deliver an ad directly impacts user experience, however, so ad placement is an important consideration.

When a developer creates a gaming app, he or she usually knows the target audience and what will attract users to stay in the app and revisit it. But surprisingly, most developers think of monetizing an app – and specifically of how and where to advertise – as an afterthought.

This is even more surprising, because once the fun of the design and development process is over and an app is in the market, its creator has the freedom to sit back and quite literally make money in his or her sleep – or while developing his or her next app.

By not leading with a monetization strategy, a developer can never truly optimize the user experience. You see, it is common for a developer to save a tiny spot at the bottom of the screen for ad serving. However, a 16-year-old male gamer might be more inclined to grow annoyed with a gaming app that flashes ads that interrupt his play. Why not show him an ad before the game even begins, and get it over with? This would most likely increase his rating of the app and his likelihood to both want to use the app and recommend it to friends.

Modern ad tools and analysis ensure a relevant ad will be displayed to the user. These tools manage bidding and serving, and can provide analysis so advertisers can track which ads make the most impact. But an app’s users have the power to maximize the benefit of such tools. This is because a great user experience will ensure repeat visits for increasing returns, if only the developer will start with the end in mind.

And with mobile apps, isn’t it all about experience?

Read more: http://appdevelopermagazine.com/magazine/July13This content is made possible by a guest author, or sponsor; it is not written by and does not necessarily reflect the views of App Developer Magazine's editorial staff.