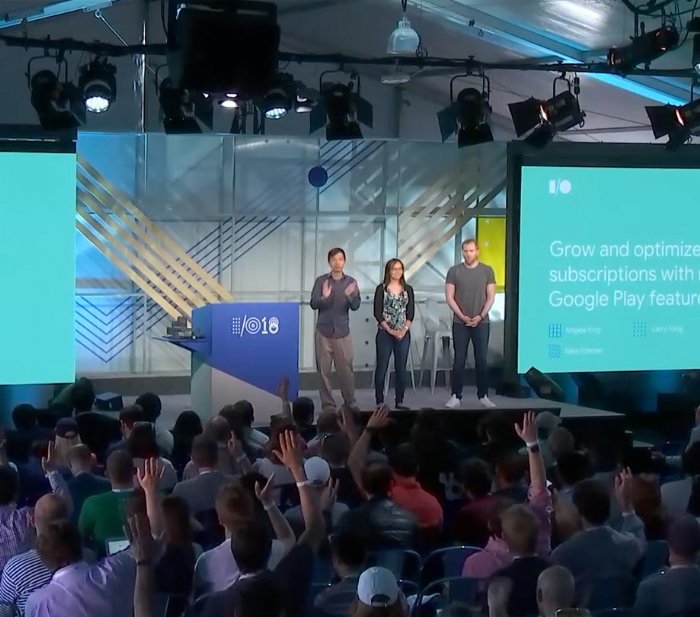 Earning more money from your apps using Admob, and growing your app user base using Adwords just got better thanks to some new products being launched by Google at the I/O event in 2018 -day one.

At Google I/O this week, Google has launched several new ads products that aim to help developers grow their user bases and earn more money with their apps.
Along the same lines, there have been several updates and new features for AdWords (Universal App Campaigns), AdMob, Measurement capabilities and more.
Sissie Hsiao, VP of Product, Mobile App Advertising at Google says:
"It's exciting to connect with the developer community and hear about all of the amazing things being built, especially mobile apps. These apps are the very reason many people consider their phones indispensable. People use these apps to stay connected, be entertained, and get everyday tasks done. Last year alone, people downloaded 94 billion apps from Google Play."
In Sissie's blog post, she goes on to say that all of this means more opportunities for developers, but it also means it's much harder to get discovered - which makes advertising tough.
Developers have driven more than 10 billion app installs with AdWords. But to help developers use Google advertising tools to get more app installs, they are launching a new beta that allows developers to surface relevant app content within ads. For example, Wish, a shopping app, can link its product catalog to AdWords and surface relevant in-app product images and descriptions directly in its ads. Sounds alot like deep-linking to me. The beta will be available in the coming months.
To help developers that sell directly to advertisers but suffer from multiple SDK integrations to report the metrics back to paying parties, Google is integrating IAB Tech Lab’s Open Measurement SDK into the Google Mobile Ads (GMA) and Interactive Media Ads (IMA) SDKs.
In another move to further help developers make the most of rewarded ads, which have seen a 9x increase in impressions, across both free and paid apps since launch, they are also introducing rewarded reporting in AdMob. Developers on AdMob will have access to rewarded ad metrics such as opt-in rate, consumption rate and rate of reward use.