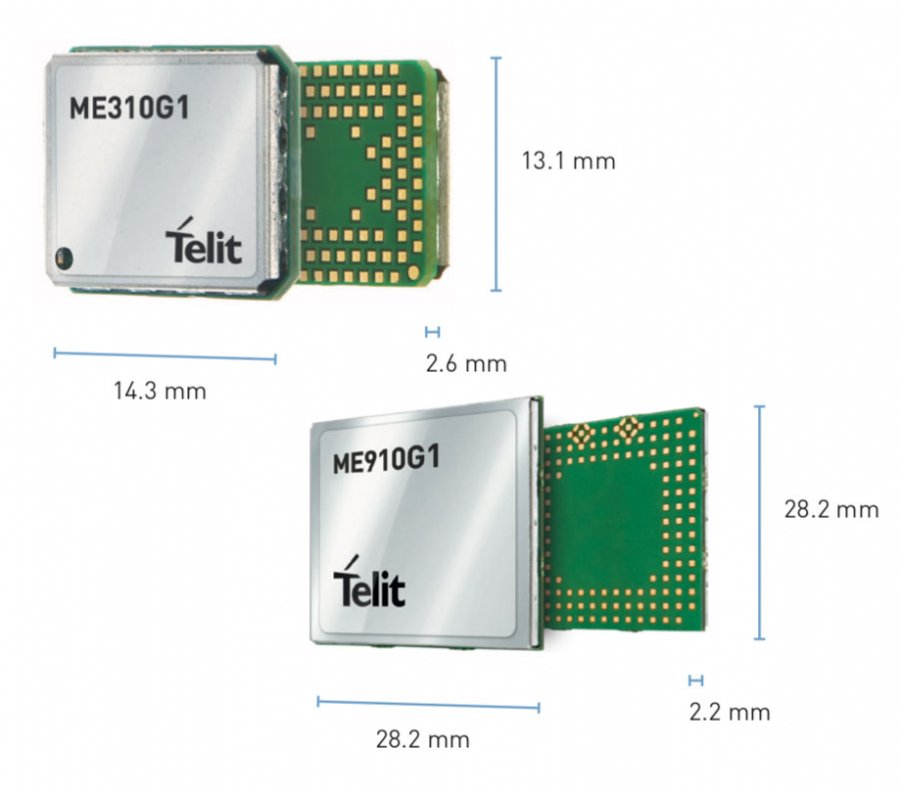 Telit has announced the ME310G1 and ME910G1 modules, designed for mass-scale LTE-M and NB-IoT deployments that feature hundreds of thousands or millions of devices.

Telit announced the ME310G1 and ME910G1 modules, designed for mass-scale LTE-M and NB-IoT deployments that feature hundreds of thousands or millions of devices. Based on the new Qualcomm 9205 LTE modem and featuring optional 2G fallback, the modules also provide a future-proof foundation for IoT deployments that span legacy networks, 4G and 5G.

The ME310G1 and ME910G1 are the first 3GPP Release 14 additions to the Telit portfolio and the first members of Telit’s new series based on the Qualcomm 9205 LTE IoT Modem, which was announced in late 2018. The highly compact chipset enables Telit to meet booming global demand for ultra-small modules for applications such as wearable medical devices, fitness trackers and industrial sensors.

The new modules are ideal for battery-powered applications via improved features such as Power Saving Mode (PSM) and extended Discontinuous Reception (eDRX), which periodically wakes up the device to transmit only the smallest amounts of data necessary before returning to sleep mode. Both modules also ensure reliable indoor connections, with a maximum coupling loss of up to +15dB/+20dB for superior in-building penetration compared to earlier LTE standards.

“With the new ME310G1 and ME910G1, Telit once again enables IoT developers, providers and their customers to take advantage of the latest and greatest technologies—in this case the new Qualcomm 9205 LTE IoT modem and 3GPP Release 14, supporting Cat M1 and NB2” said Manish Watwani, chief marketing and product officer, Telit. “The ME310G1 is extremely optimized in size, and both the ME310G1 and ME910G1 are highly optimized for affordability, power efficiency, performance, and future-proofing, making them the ideal foundation for mass-scale IoT deployments that need to remain in service for a decade or longer.”

“Qualcomm Technologies provides the cutting-edge connectivity and compute technologies that enable a massive volume and range of connected devices,” said Jeffery Torrance, vice president, business development, Qualcomm Technologies, Inc. “We are proud to work with Telit as they continue to offer exciting new products that drive the Internet of Things forward and lay the foundation for the connected 5G world.”

The multi-band ME310G1 and ME910G1 are available in versions with 2G fallback for use in areas where LTE-M/NB-IoT service is yet to be deployed. These versions also support GSM voice and will support VoLTE for applications that require the ability to make phone calls.

The ME910G1 is the latest member of Telit’s best-selling xE910 and family. The ME910G1 is also a drop-in replacement in existing devices based on the family’s modules for 2G, 3G and the various categories of LTE. With Telit’s design-once-use-anywhere philosophy, developers can cut costs and development time by simply designing for the xE910 LGA common form factor, giving them the freedom to deploy technologies best suited for the application’s environment.

The ME310G1 LTE-only variant is less than 200 mm2 and variant with 2G fallback is less than 300mm2 and they enable enterprises to deploy new small footprint designs across many application areas including asset tracking, health-care monitoring, smart metering, portable devices, industrial sensors, home automation, and others that benefit from low-power and low-data rate capabilities. The xE310 family’s flexible perimeter footprint includes pin-to-pin compatible 2G and 4G modules, enabling integrators to design a single PCB layout and deploy a combination of technologies.