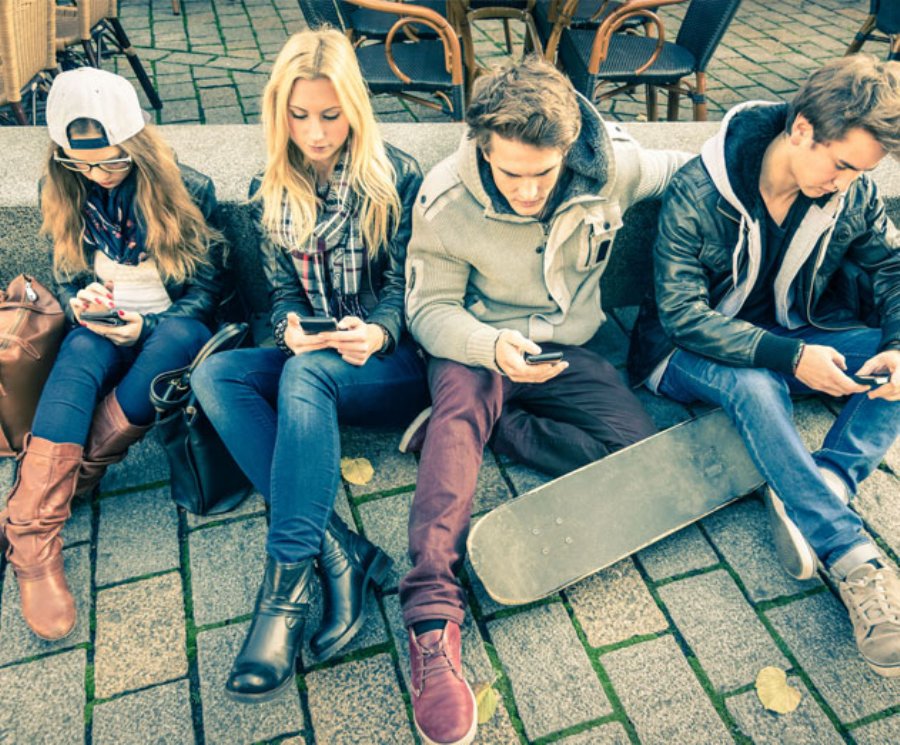 
6,712
Mobile user expectations are an interesting thing. We all hear that they are through the roof, and that users expect app behaviors and responses to occur in near-nanoseconds. What most of us don’t hear is that the features and functions that matter to users do not necessarily align with what developers are giving them - or what developers think they want.
As a result, even software teams who make a concerted effort to meet user expectations may not be getting the user experience (UX) right, unless they ask relevant questions and perform appropriate tests. For the ones who aren’t really trying to meet expectations, the outcome can be dismal. The same is true for teams who are shortcutting testing and quality assurance to meet expedited release cycles.
In late 2015, Forrester Research released a study, “Why Good Apps Are Not Good Enough,” that showed companies that stop at “good” apps are doing both users and themselves a disservice. Per the study, companies that push to achieve app greatness enjoy a manifold increase in user satisfaction, return on investment, employee productivity, and more. Let’s have a look at that study, and then we will consider what companies aren’t, but should be, doing to achieve app greatness. 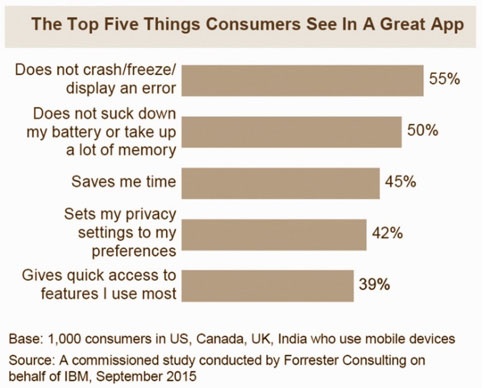 The Forrester study was illuminating, providing insights that went well beyond the “users-want-it-all” commentary of many contemporary surveys. In the survey of 1,000 mobile users, respondents said that a great app should save them time (45 percent), adjust privacy settings to match the user’s preferences (42 percent), and expedite access to the user’s most commonly used features (39 percent).
The study also found that 23 percent of U.S. users, specifically, expect their app experiences to change based on location. (In case you are curious, a separate study found that only 34% of businesses use location to make mobile services more relevant to their customers.)
Based upon all the results and responses, Forrester made additional observations. To go from good to great, a mobile app must:
- Work flawlessly in terms of uptime, power use, and speed.
- Be easy to access and use anytime and anywhere.
- Give the user control over the interaction.
- Provide relevant contextual experiences.
In other words, users won’t rank apps great simply because they are lightweight and crash-proof. Although they expect to control their experiences, they also want great apps to be intuitive and truly helpful - and able to evolve based on their changing conditions and behaviors.

The Good, the Bad, and the Great: Driving Fantastic Results

As we have seen, great apps should not only integrate with users’ lives and facilitate their daily activities but also create a two-way synergy between the device and the user. Yet, many teams are not only stuck in “good-enough” mode, they cannot master the basics.
For example, a 2015 survey by Dimensional Research found that 53 percent of mobile users experienced an app crash, freeze, or other stoppage within a six-month window. Underscoring the importance of this problem, the study found that 55 percent of users blame performance problems on the apps. (A much smaller number blame the network, the OS, or the phone.) Thirty-seven percent say that an app crash or freeze makes them think less of a company’s brand.
The good news is that companies that make the effort to achieve app greatness can reap amazing value and benefit - whether they develop consumer apps or enterprise apps.
Specifically, among the mobile professionals polled in the Forrester study mentioned earlier: 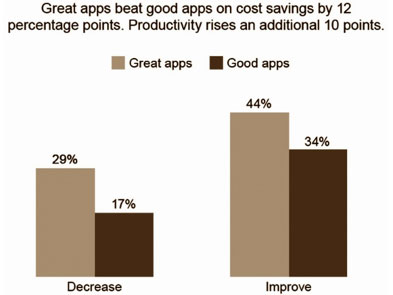 1. Well-performing apps that were self-rated “good” generate an average of $9.5 million in additional revenue from direct sales, advertising revenue, or other direct revenue sources. Those who self-rated their best-performing app as “great” generate, on average, $45.9 million - a five times’ greater return.
2. Great apps reduce operational costs by a greater margin than good apps (29 percent versus 17 percent.) They also foster a greater increase in employee productivity (44 percent versus 34 percent).
3. Last, but certainly not least, great apps increase customer engagement by six percent, customer experience by 10 percent, and customer loyalty by 15 percent over good apps. Compounded over time, the value gap between a good app and a great app will diverge substantially for several reasons, including:
-  Return customers cost less to keep than new ones take to acquire.
-  Happy customers and users are more likely to give good reviews (the number one criteria users rely upon for app selection)
- Loyal customers are more likely to recommend apps and their brands to their families and friends.

Getting to great requires more than software and teams - or even entire organizations - deciding they want to do better. Organizations must make a practice of focusing on app excellence. They must develop a culture around quality and adopt the technologies to help them achieve it.
Some suggestions, based upon my experience helping Orasi’s customers, include:
1. Obtain Direct Input.Whether through crowd testing, user interviews, or other means, organizations must find out not only what users like but also what they don’t like. These metrics cannot be gathered through standard measurement techniques. Note that getting this input early will greatly reduce time in code rewrites from perceived defects.
2. Put Your Metrics to Work. Although user input is vital, it is also important not to forget the value of traditional metrics. More importantly, firms must effectively use the information they glean from measurement. They must incorporate it into a meaningful, quality system that cannot be disrupted by corporate priorities, from demand for faster release cycles to budgetary restrictions. At the end of the day, measurement is only of value when its information is productively used to increase quality - to improve a product in ways that are verifiable from the user’s perspective.
3. Automate Wherever Possible. When teams are bogged down with excessive manual testing efforts, the “keep-your-head-down-and-get-it-done” mentality is unavoidable. Timelines stretch out, and either releases slip or tests are abandoned. No one thinks about creativity or greatness.
Automation, on the other hand, frees resources and removes human bottlenecks. (It is also a fundamental requirement for any move toward agile or continuous integration techniques.) I worked on a Jenkins deployment project where the time to test a new release on approximately 50 mobile devices dropped from 12 months to one. Labor expenditure per release dropped as well.
4. Set “Greatness Goals,” and When You Meet Them, Raise the Bar. App greatness is a moving target. With every release, users expect not only more functionality but also better delivery and execution. New goals should encompass more than adding new features. They should also focus on making the current ones more efficient. Sometimes the best enhancement is simply reducing the number of swipes it takes to accomplish an existing function.
5. Don’t Be Afraid to Invest. I hope we have made the case for the ROI of a great app. On top of that, implementing process improvements - from test and reporting automation to virtualization - nearly always has a payback of more than 100% ROI. (To read some Orasi case examples that prove technology improvements can more than pay for themselves, click here.)

These recommendations look great on paper, but many firms have no idea where to start. I suggest organizations take a hard look at their traditional processes and identify the barriers to quality. Then hire a consultant to implement some process improvements, like automation, and free the time to reorganize your approaches.
If you aren’t sure where to start, have a look at my April article, published here, that highlights some of the systemic barriers to UX improvement. It also offers some key process changes that can move teams in the right direction.
As food for thought and future discussion, I’ve also provided some simple, process-based questions to ask yourself and your team. If the answer is “No” for any of them, it’s worth the effort to get to “Yes.”
- Are you placing sufficient emphasis on performance, through performance engineering and testing? A brilliantly designed application is worthless if it doesn’t perform.
- Are you incorporating sufficient user-based testing activities, such as UX testing and crowd testing?
- Are you following all recommended testing practices?
- Are you taking advantage of automation where you can?
- If you are adopting or using Agile or DevOps methodologies, are you doing so without reducing the time required for appropriate testing and quality assurance?
- Are you failing earlier rather than later?
- Is system uptime in production meeting goals, and, if so, is there a process to determine if those goals need to be elevated?
- Are you receiving production-side feedback, and is that information meaningfully incorporated into user stories? Do code updates reflect that input?
- Are you and your team learning from mistakes of the past?

The amount of effort and reengineering involved in moving from good apps to great will vary based upon the company, corporate culture, adoption level of technologies such as automation, and even the type of apps and the sophistication of their users. Often, the ones with the farthest distance to travel must expend the most effort. They are also the ones that can achieve the greatest gains.
At the end of the day, you don’t decide if your app is great; your users do. With consumers spending more than 85 percent of their smartphone time inside of apps (per the Forrester study), and with smartphone subscriptions expected to grow to 6.3 billion globally by 2021 (per the Ericsson Mobility Report), companies that develop apps for any purpose must be like sharks. Constantly move forward or die.