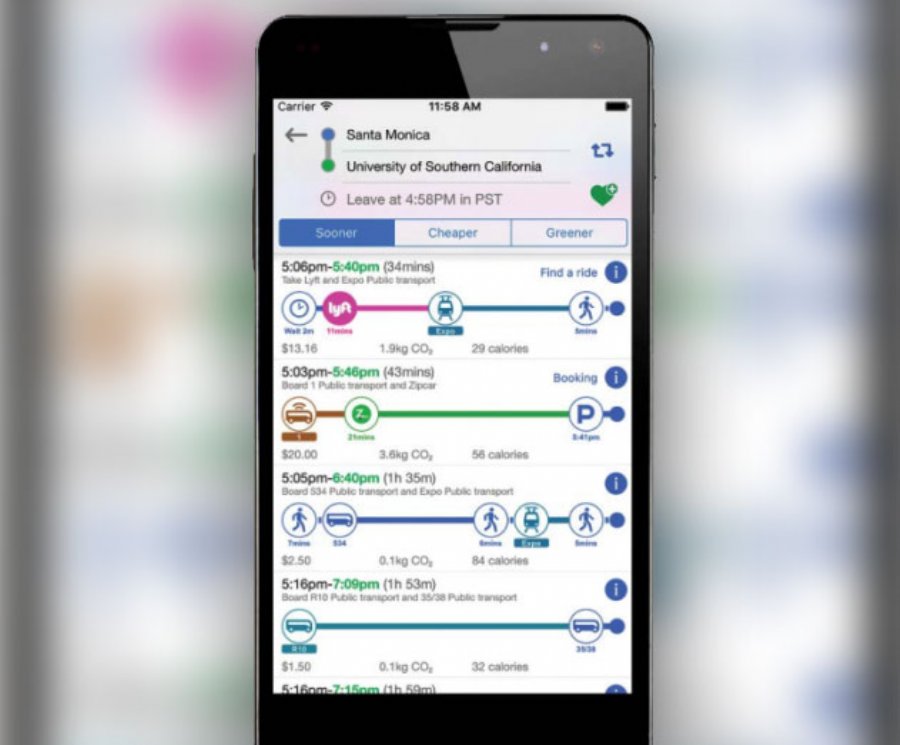 
15,447
It’s clear that our cities are expanding, but with this comes challenges, such as more people, more construction, and more congestion. Getting from point A to point B will only become more difficult as populations grow and demographics change. However, we shouldn’t have to wait. There shouldn’t be obstacles to movement through urban environments.
Nowadays, almost every one of us carries a smart mobile device with access to innumerable information on getting around, which provides rich data that we can tap into. We have an app for public transport schedules, an app for e-hailing services, an app to book a taxi, another one to book a parking space, and the list goes on. These apps help us move through the city at different speeds, costs, and efficiencies with no way to compare and make a knowledgeable decision. They may be ideal solutions for specific problems, but none of them ‘talk’ to each other.
This fragmentation between providers and between modes of transport isn’t just confusing, it’s wasteful as well. Making a connection could provide opportunity for these solutions to do so much more.
The Concept
These disparate transportation solutions working together could provide ride sharing, greener or faster options for getting around a city, and make better use of public transit.
This notion is exactly what Xerox sought to do with its Mobility Marketplace concept. The app takes your origin, destination and desired departure or arrival time, and evaluates the most efficient route according to your preferences for time, cost, environmental impact or health benefits. It’s like an “eBay of Mobility,” a level-playing marketplace for selecting how you get around.
We had the idea, but taking the Mobility Marketplace vision to market had its hurdles: the team needed to assign resources, design a proof of concept, and most importantly, garner the support of cities, citizens and transport providers to move ahead. But we were up for the challenge and we learned a lot along the way.
The Inception
Once you have a vision for an app, how do you bring it to life? Here’s what we did.
1. All good ideas need research and data to back them up. The basic idea for the Mobility Marketplace was conceptualized at the Xerox Research Centre Europe in 2011. Back then it was a project called TAU – Transportation as Utility.  However, the market wasn’t ready and it wasn’t until 2014 when Xerox’s research and business teams started brainstorming how to create a more concrete offering. These teams included researchers from Bangalore, India; Grenoble, France; Palo Alto, Calif., and Webster, N.Y., as well as myself.
2. Visualize your concept to make the idea “real” for everyone. We started working with a designer to create a visualization of the idea. The designer created screenshot mock-ups, a user interface, and a flowcharts demonstrating how a user would interact with the system. It was the first time that the idea came to life, and the visualization helped bring everyone together on the same page.
3. Know when to narrow the group and broaden expertise. Converting these visuals into a proof of concept and managing by committee could have been a disaster. As with chefs and soup, too many experts risk ruining the dish. A smaller team was created to move the project to the next stage and identified an experienced iPhone developer to create an app using the provided visual elements. The app was demonstrated to the wider project team, and the excitement was unanimous.
4. Test the concept. Ethnographers from PARC conducted initial user studies with the prototype app and validated concept acceptance. The results were promising and helped to shape the idea further.
5. Gather buy-in beyond your organization’s walls. Armed with an eye-catching app that users could now touch and play with, the Mobility Marketplace was introduced to the real world and showed off to potential cities and partners. Everyone was absolutely intrigued by the app and wanted to see more. While the initial app was polished, in truth it was only a façade. The next challenge was to add some “smarts” to this incredible framework, and time was of the essence.
6. Test again. In just four months, the app and the platform were taken to the first round of real-world testing.  We worked with EarliBird, a company specializing in recruiting testers, to collect invaluable user feedback. After this first round, we conducted two additional rounds of testing, gathering and analyzing user feedback. The app’s user experience and interface were ready for launch in Los Angeles as Go LA and Denver as Go Denver.
You’re launched, now what?
Taking a vague idea and grounding it in simple, user-friendly technology is never easy. And when that idea is how to move a city with millions of people, the undertaking can become intimidating.
Once the app is launched, the work doesn’t stop. It’s critical to employ marketing tactics of all kinds to spread the word about the app. We’re constantly tracking how many people are downloading and using the Mobility Marketplace apps in Los Angeles and Denver, as well as addressing user feedback.
As the pilots continue, we are already working to arm the cities with insightful data and help them to improve city mobility and infrastructure.

Read more: http://www.xrce.xerox.comThis content is made possible by a guest author, or sponsor; it is not written by and does not necessarily reflect the views of App Developer Magazine's editorial staff.