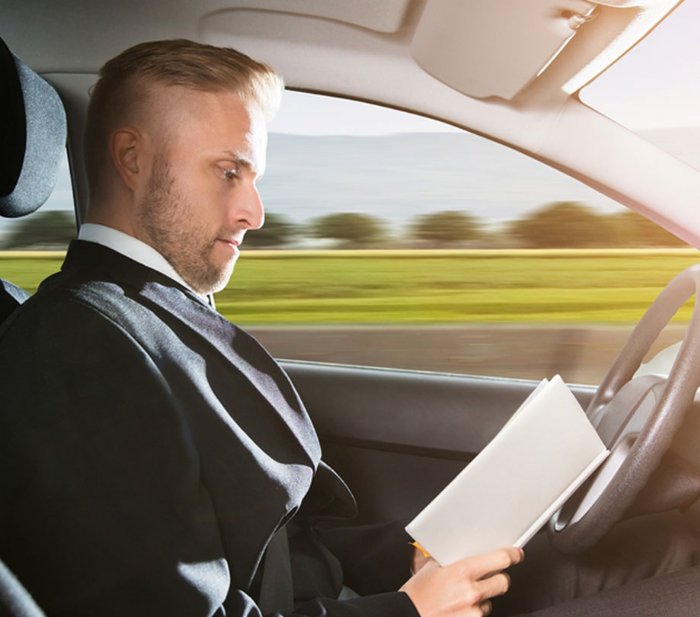 When news about autonomous vehicles filled headlines a few years ago, it was characterized by bold claims: that entire lanes would be dedicated to hands-free driving by 2020 and door-to-door autonomous trips would be possible around 2030, for example.

Since then, the frenzy about an autonomous takeover of our personal transportation system has waned. But a new reality has set in: Autonomous vehicles are already operating in a number of industries, such as transportation, farming, and small deliveries. While it may not be driving the news cycle, the work on this technology hasn't slowed down.

It takes a workforce with specialized knowledge to support the autonomous technology industry — top skills include c or c++, python, and Linux. To inform these unique job seekers and update employers on the competition, we found the top companies and geographic areas in the U.S. for autonomous vehicle jobs.

Growth in the autonomous vehicle sector has been massive between 2015 and 2019: During this period, job postings increased by 833% and job searches increased by 450%. While there was a slight dip between 2018 and 2019 (a 19% drop in job postings and 20% drop in job searches), this could be more an indicator of stabilization in the field than a cause for concern. Interest and investment in the sector are still strong, with state transportation agencies building new test facilities and the global autonomous vehicle market predicted to reach $556 billion by 2026.

To discover the top hirers for autonomous vehicle jobs and learn what's driving overall growth, we dug into Indeed data on which companies are posting the greatest numbers of jobs: 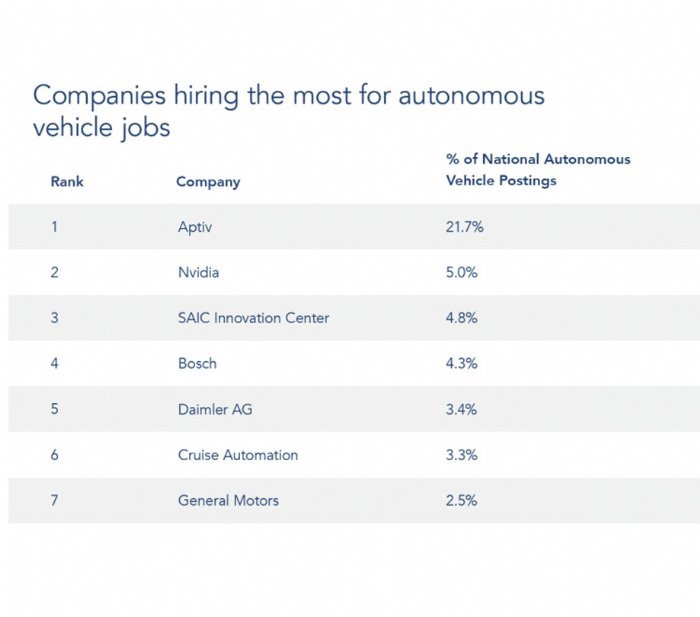 Coming in at No. 1 for the second year in a row is the mobility technology company Aptiv, with far and away the most job postings at 21.7%. The company recently celebrated 50,000 driverless Lyft rides in cars outfitted with their technology, after rolling out this collaboration several years ago.

Aptiv is working to advance its own software, computing platform and artificial intelligence (AI) technology. Plans include opening a new hub in China and renovating their facility in Troy, Michigan — which will create 500 U.S. jobs. Aptiv is also dedicated to advancing research in the industry as a whole, announcing their intent to share the largest public dataset on autonomous driving data ever. With all this growth, it's no wonder they're leading the pack.

Number two for the second year in a row is Nvidia, which makes hardware and software for self-driving vehicles. The company, also a leader in the gaming space, has established itself as a leader in providing its advanced technologies to automakers developing autonomous capabilities.

For example, they formerly provided the chips used to power the AI-driving capabilities of Tesla vehicles (before the company decided to develop their own technology). Nvidia recently penned a deal with Volvo to collaborate on technology for self-driving trucks and deepened its relationship with Toyota — where it will support not only the automaker's hardware needs but the development process and workflow, as well.

As these collaborations show, the autonomous-vehicles field represents an interesting marriage between some of the world's most advanced AI technology and one of the most traditional U.S. industries: auto manufacturing. The rest of the top employers on our list exemplify this, being a mix of tech companies (No. 3, SAIC Innovation Center; No. 4, Bosch; and No. 6, Cruise Automation) and automakers (No. 5, Daimler AG and No. 7, General Motors). 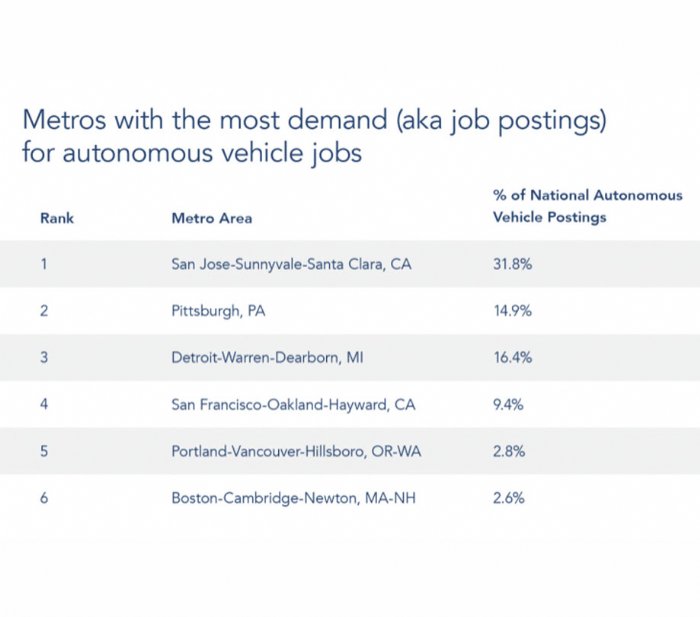 Topping our list for the second year in a row is the San Jose metro area, also known as "Silicon Valley": home to almost one-third of all autonomous vehicle jobs in the U.S. A longtime leader in all things tech, the area is home to top companies such as Nvidia and SAIC Innovation Center.

Following this are two Rust-Belt cities, representing the "old meets new" nature of this industry — where brand new tech and traditional auto companies and regions can both shine.

Pittsburgh, known for steel production, comes in second, jumping up from last year's No. 4 spot. No.3 is Detroit, aptly known as "Motor City," dropping from second place last year. Pittsburgh houses offices for the autonomous vehicle tech firms Aptiv, Aurora and Argo. It is also where Uber's advanced technology group is located, along with some of the company's self-driving vehicle tests. Detroit is home to the big three automakers: Ford, General Motors and Chrysler. These three giants of the U.S. auto industry, and are now looking to the future by investing heavily in the development of autonomous technologies.

The rest of the top six cities for jobs in autonomous vehicles are distributed along the coasts, as is commonly seen in tech employment: San Francisco, at No. 4; Portland, at No. 5; and Boston, at No. 6.

As the use of autonomous driving technology expands to more industries, it will be interesting to watch which geographies dominate this space. For now, the concentration is shared across tech-focused cities and more traditional manufacturing metros. The location of autonomous vehicle-related jobs may diversify as more companies enter this space or employ this technology.

Wherever the future of autonomous vehicles goes, we'll keep our eyes on the road.