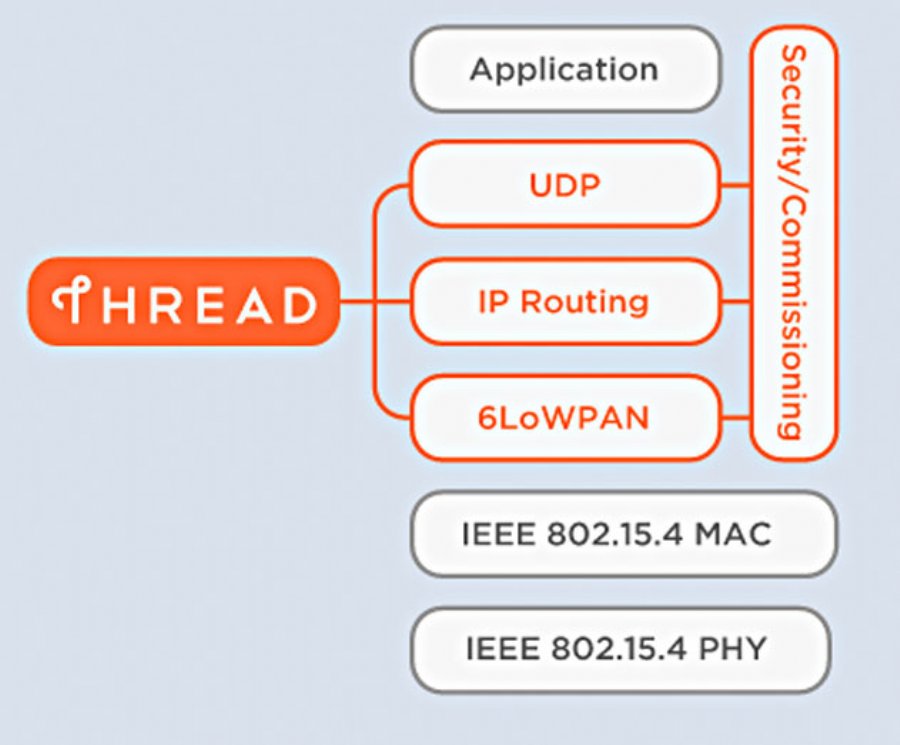 
23,050
The Thread Group, a consortium of over 160 companies focused on the IoT, has released Thread – a new IP-based wireless networking protocol designed for low-power connected products in the home. Thread addresses the networking layer - routing, commissioning and security. The application layer is not covered by Thread but runs on top of it.
Led by a heavyweight list of semiconductor companies including ARM, Freescale, Qualcomm, and Silicon Labs, Thread is built on open standards and IPv6 technology with 6LoWPAN as its foundation, Thread is designed to facilitate secure and reliable networks with no single point of failure, simple connectivity and low power. The protocol has the ability to securely connect more than 250 devices into a low-power, wireless mesh network that also includes direct Internet and cloud access for every device.
A Thread network consists of the following nodes: End Nodes, Router Eligible and Border Routers. End Nodes can be battery operated and are not routing data packets for other nodes. Router eligible Nodes can direct traffic in the network and assign a leader to manage the network. If a Leader fails, the network assigns another leader so the network is always "on" with no single point of failure. Border Routers provide a bridge from the Thread network to another IP-based network such as Wi-Fi or Ethernet.
Thread implements a simple commissioning process and requires security to be implemented. A user authorizes the devices onto the network using a smart phone, tablet or computer. A GUI-rich device within the network can be used to authorize devices. A security session is established between the new device and the commissioning device to authenticate and provide credentials. Once commissioning session is established, the device attaches to the Thread network and uses MAC encryption for all messages.
The new Thread IP-based wireless networking protocol offers:
- Reliable Networks: Thread offers self-healing mesh networks that scale to hundreds of devices with no single point of failure. Devices are ready when people need them.
- Secure Networks: Thread networks feature secure, banking-class encryption.
- Simple Connectivity: Thread devices are simple to install with a smartphone, tablet or computer. Consumers can securely connect Thread devices in the home to each other and to the cloud for easy control and access from anywhere.
- Low Power: Thread supports battery-operated devices as part of a home network. This allows the devices that people use every day - including thermostats, lighting controls, safety and security products - to be a part of the network without requiring constant charging or frequent battery changes.
- Hardware Availability: Millions of existing 802.15.4 wireless devices already on the market can run Thread with just a software enhancement -- no new hardware required. Thread is designed for quick implementation and deployment of devices throughout the home.
The Thread technical specification and documentation is available to Thread Group members. Non-member companies and developers can access Thread technical white papers and other information to learn more about the platform.
A Thread product certification program will launch in September, when testing will begin for Thread-compliant products. Currently Thread compliant chips and software stacks will be available from ARM, Freescale and Silicon Labs to allow end product development.
The first Thread-certified products will be available to consumers in late 2015.