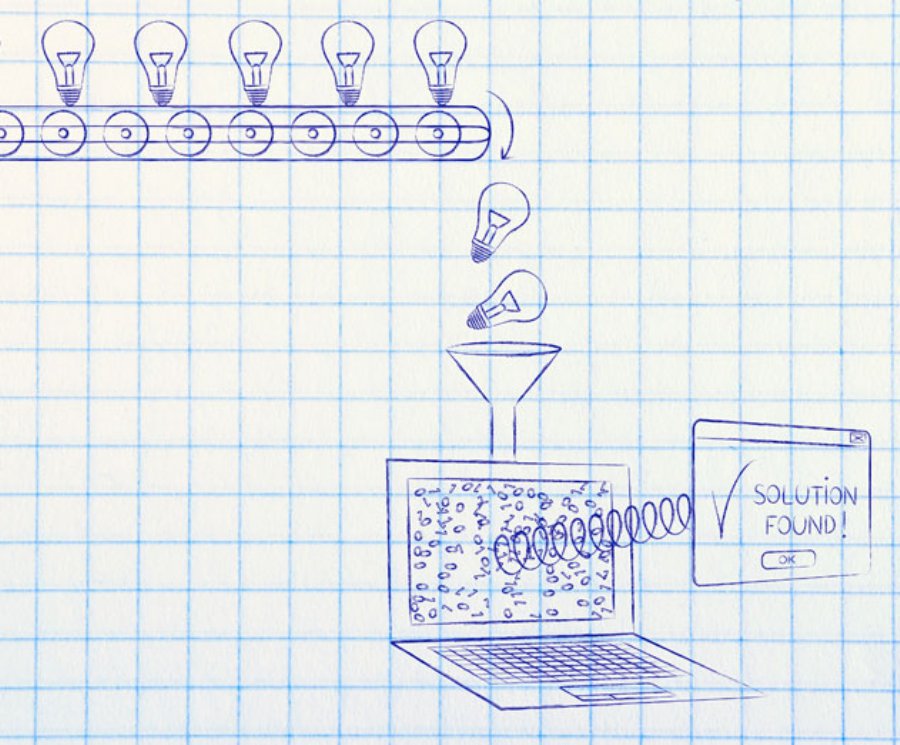 
13,274
Software consultants and experts frequently tout the benefits of using modern solutions and tools to manage software processes more effectively. These assertions are more than salesmanship—they are backed by solid evidence in the form of real-world case examples. In many cases, participating organizations may not want their confidentiality compromised, so organizations such as Orasi often share these results on an industry rather than company-specific basis. Nevertheless, the bottom-line results are real.
When deployed properly and used effectively, the return on investment (ROI) on process improvements, from test automation to reporting and beyond, can be extraordinary. If every enterprise involved with such improvements would share their stories, I believe more organizations would embrace the solutions that drive them. To do my part, I’ll share three specific case examples where Orasi consulting teams directly participated in (and witnessed the outcome of) meaningful process improvement efforts. In all three instances, modern solutions replaced or supplemented inefficient processes and drove results that were nothing short of amazing.

A global financial organization brought in an Orasi team to develop a more efficient reporting system for testing and defect management. Prior to the project, inconclusive manual reports were being developed by in-house testing teams, wasting time and resources and preventing leadership from obtaining the insights needed for effective decision making.
The consultants deployed a reporting services offering that automates the extraction, analysis, and reporting of test data. The solution was developed specifically to provide decision makers with the information to monitor the progress and increase the effectiveness of IT resources, workflows, projects, and organizations. Using the new reporting automation tool, the time to create a single daily report dropped from 90 minutes to 15. The company reduced daily report creation man-hours from 5850 hours per year to 957—a reduction of nearly 84 percent (realizing a savings of more than $316,000.)

A major auction operation lacked an effective process to provide sufficient data for functional testing, performance optimization, and other needs. The use of manual processes was causing teams to expend an unacceptable amount of time and manpower developing test data, which for some tests required thousands of records. Furthermore, the data pool was extensive, and teams were attempting to use disorganized spreadsheets and poorly structured data tables to manage and control it.
Orasi consultants proposed implementing a test data automation solution that would enable teams to meet their test data requirements in three days rather than one month. As with most process improvement efforts, initial groundwork was needed to lay the path for adoption. For this project, Orasi helped the customer teams achieve three key steps:
- Identify the business rules and determine how data flowed through them.
- Write accurate data requirements to enable the automation tool to extract the correct data.
- Write scripts so the automation tool could replicate the effort, extracting clean data that met business requirements on an ongoing basis.
The project provided the auction company with a savings of between 400 and 500 percent in its first fiscal year, based upon the man hours and time saved with the test data automation tool versus the previous manual, spreadsheet-based test data management approach.

A large automotive manufacturer was seeking to reduce its investment in mobile devices while maintaining a sufficient level of device testing. The organization was testing (and maintaining) 19 different device models running on the Verizon, AT&T, and Sprint networks and operating with a variety of Android, Windows, and BlackBerry operating system builds. 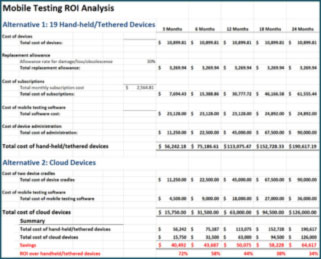 Orasi consultants recommended using cloud-based devices—real devices, operating over real networks, that organizations lease in the cloud by the hour (or other unit of time)—rather than purchasing and maintaining them in-house. The total cost of the 19 devices, which cycled every 24 months, was approximately $10,900. The company factored in another 30 percent ($3,270) for replacement due to damage, loss, obsolescence, or other factors.
The organization was expending more than $2,500 per month ($30,778 per year, to be exact) for device plans that supported minutes, texting, and data exchange. Mobile device testing software licenses and salaries/benefits for device administration/management (half a full-time person) were costing another $68,128 per year. The total tally for the 19 devices and testing, over a one-year period, was $113,075.
When the organization moved to cloud-based devices, the provider indicated that an equivalent amount of testing for the 19 devices could be accomplished with two device cradles and two testing licenses. The cost over one year for the device cradles and the software was $63,000 ($45,000 for the cradles and $18,000 for the two licenses).
The automobile manufacturer saved $50,075 (44%) over the first year while gaining continual device access for both developers and testers (in shared sessions, if desired). The organization also eliminated the cost and complexity of procuring, maintaining, and managing physical devices and was able to expand the range of testing both networks and locations to a global scale. These savings are typical, and organizations that use devices less frequently or for shorter periods of time will enjoy the same benefits with even greater savings.

These results may seem exceptional, but the circumstances in which they occurred were quite commonplace. Every day, organizations are seeing these types of financial benefits through automation, cloud-based solutions, and other modern approaches. Unfortunately, many firms are either so used to operating in reactive mode—or their inefficient practices are so entrenched—that they are resistant to change.
It’s for this reason that consultants are often the catalyst for better outcomes. While it is possible for organizations to implement these changes themselves, the initial effort often requires outside knowledge and assistance. Overburdened team members generally need help absorbing excess resource load so they can catch up on backlog, clear their minds, and adapt to the new approaches. This expense can skew positive ROI initially, but enterprises will recoup the costs—and more—over time.
Additionally, when teams are no longer overwhelmed by the difficulties inherent with inadequate test data management, manual reporting, and other inefficient methods, their work effort almost always fosters even greater value. The use of modern, cost- and resource-efficient approaches boosts team morale, enhances productivity, and paves the way for faster release cycles and higher quality. Those outcomes make the leaders of all business divisions happy.