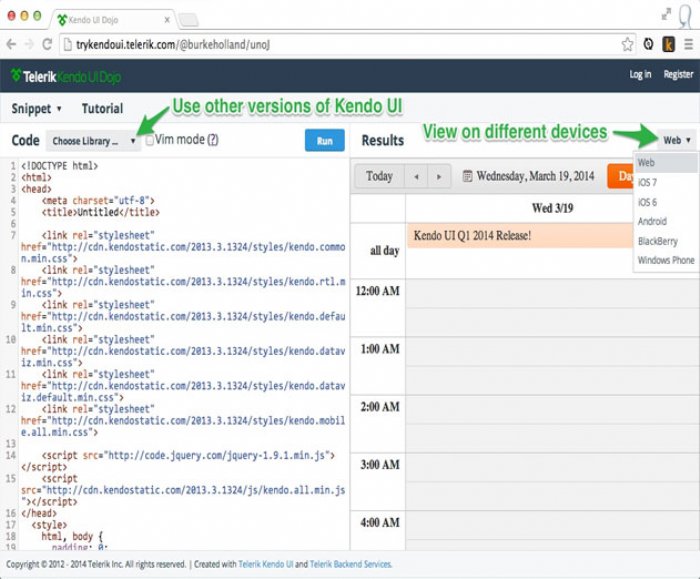 
10,872
Telerik has released the newest version of Kendo UI the company’s platform to create HTML5/JavaScript apps.
Included in the release is Kendo UI Scratchpad, a new interactive way to work with Kendo UI. Similar to JSFiddle or JSBin, the Kendo UI ScratchPad allows developers to work with Kendo UI in a fast and informal environment. Pick the appropriate version of Kendo UI, pull in other libraries and view results in a variety of form factors. The ScratchPad remembers logins and handles versioning as well.
All Kendo UI Demos can now be opened in the ScratchPad, to tweak the demo in browser. Developers can fork these demos and use them as a jumping off point for projects.
The new Kendo UI Chrome Inspector automatically inspects a page for Kendo UI widgets. It then lists each one and allows developers to view the widget’s configuration, log any events the widgets are firing, and will even debug code to try and find any mistakes made in the code.
Version 1 of the official Angular directives for Kendo UI haw arrived and can be downloaded at the official Angular Kendo UI library from the GitHub repo. These integrations remain free and open source.
This release of Kendo UI Web includes a Masked TextBox widget, a Sortable widget, and Grid Frozen Columns. Grid Support For Real-Time Data support is now offered directly into the Kendo UI DataSource, making the implementation much easier with the grid or any other widget. The Kendo UI Notification widget provides the ability to create a notification and programmatically show or hide it.
The Kendo UI Mobile has been upgraded to allow the use of mobile components outside of the framework as standalone widgets or with a favorite JavaScript library. The new release allows for the decoupling of Kendo UI Mobile widgets from the Kendo UI Mobile framework so that they can now be used in Kendo UI Web applications. While Kendo UI Mobile has had a serverMode for some time, this decoupling allows for greater flexibility in building "static" mobile applications with traditional frameworks like ASP.NET or PHP. It also means that developers can now use Kendo UI Mobile widgets with a different JavaScript framework.
Kendo UI Mobile has a new adaptive rendering system that picks up the look and feel of the device on which it's running. The new version offers an Android Light theme that can be used in place of the existing dark one.
The UI DataViz includes a new Chart Wizard to create and configure rich charts, graphs, gauges, QR and Bar codes and more with the convenience of drag-and-drop using Visual Designer in AppBuilder.
New GeoVizualization provides powerful mapping controls allowing the use of the map tiling service to create interactive maps with pins and overlays. The support for GeoJSON enables geographic visualizations like Choropleth charts, Heat maps, and Cartograms.
More on the new version of the Kendo UI is available here. Also recently announced are new updates to the Telerik AppBuilder.