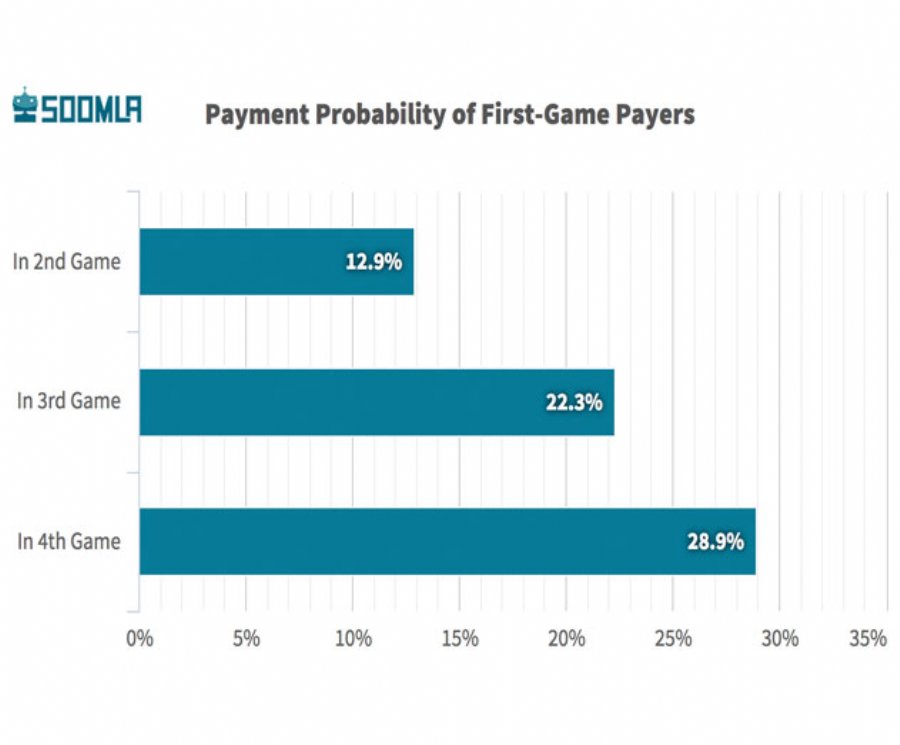 
7,386
Approximately a month ago, App Developer Magazine published an article following a Flurry report on the growth of app usage. It showed some interesting stats, including a staggering fact that app usage grew 58% in the last year alone, while time spent on phablets grew 334% year-on-year, proving to be the dominant form factor.
What was left out of that report was the Games category – still the most popular app category in pretty much every app store you can find.
Here at SOOMLA (we’re a mobile game analytics startup) we recently published another report, which looks with great detail into in-app purchases in free-to-play games. The report, entitled SOOMLA Q1 2016 Mobile Insights Report, sheds important light on the state of the mobile gaming industry, and provides valuable data.

Who pays for in-game goods

The most important highlight of the report is the fact that gamers who have purchased in-game goods are six times more likely to purchase something in the next one as well, compared to a random player. The analysis also shows the more money players spend in one game, the likelihood of them purchasing something in the next one increases.
Trigger-happy players (those who are quick on the draw when shopping in-game purchases are concerned), are even more likely to pay in the next one, as 18% of the quick payers decided to pay in a second game, as well.
Moreover, the more games paying players pay in, the bigger the chances of them purchasing something in the next one.
The report also analyzed when, during the day and during the week, are mobile gamers most active. Unsurprisingly, the weekend is every mobile gamer’s best friend, with the average DAU (daily active users) jumping 30-50% during the days off. Weekends see 30-50% more DAU. In other words - weekends are a great time for launching a game or carrying out promotions.
In a separate analysis we did back in October 2015, it was also found that players are more inclined to do the majority spending at that time, making weekends the perfect place to start a marketing campaign.

You only get one chance

Phablet usage may have grown 334% year-on-year, and it might be the dominant form factor for all the usual apps, but with games, it’s the tablet that takes the crown. It is important to notice that gamers use both smartphones and tablets to play games, but they do it in a different way.
On smartphones, their sessions will be somewhat shorter, however more frequent. Tablet users will see less sessions, but will be longer. Just as in real life, the first impression is the most important in games, as the number of sessions drops fast, and drops hard.
Our report suggests that 33.5% of users will play just one session before deciding to call it quits. Building an engaging game is a major challenge as only 6% of the users get to play more than 20 sessions, while less than 0.5% will open the game more than a hundred times. The median number of sessions per user is 2, compared to an average of 6.5.
Looking at what gamers usually spend their money on in the game, there are two different elements – consumables, and lifetime items. Consumables, which include potions, elixirs and all other items that can only be used once (or a limited amount of time) after being purchased, make up for 71% of all purchases. \
But – they’re not the number one source of revenue for game developers. Our analysis shows it’s the lifetime items which make the difference, with 65% of all revenue coming from these types of goods.

No shortcuts for game developers

One of the report’s insights is that game developers often decide to go for the shortcut when creating an in-game economy – offering limited purchases, with just a handful of one-time items. Our report backs this so-called ‘Limited Economy’ problem by stating that 65% of revenue originates from lifetime goods.
Building an engaging core loop in your game that gets users spending early on (both virtual and real money) requires significantly more effort, but rewards developers with significantly higher retention and revenue.
If the developers are not really interested in building an engaging core loop, the players most likely won’t be that interested in playing the game.

Read more: https://soom.la/This content is made possible by a guest author, or sponsor; it is not written by and does not necessarily reflect the views of App Developer Magazine's editorial staff.