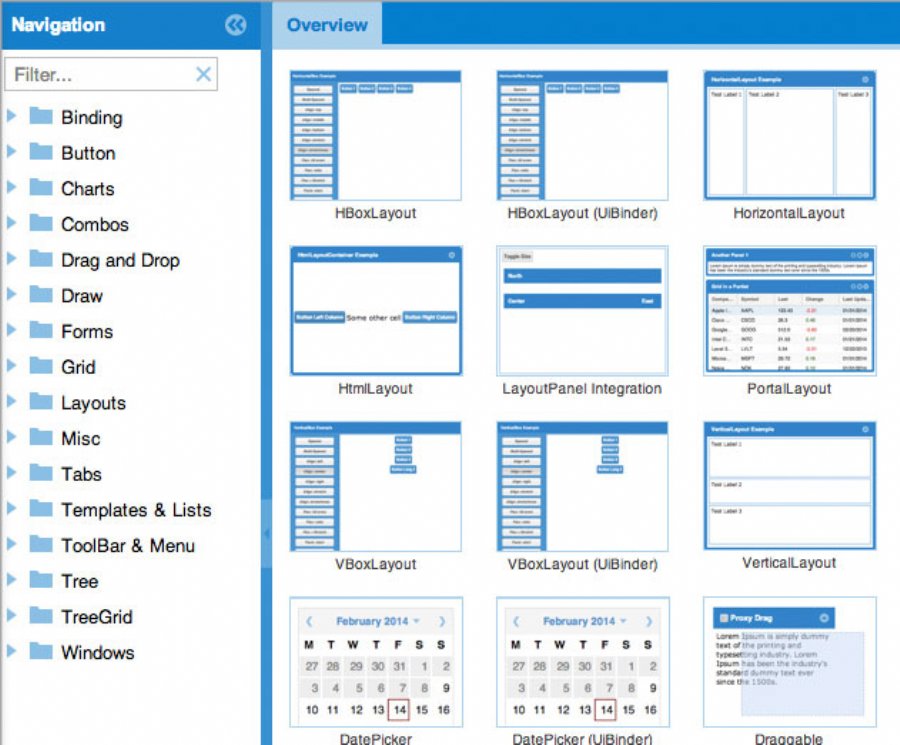 
7,797
Sencha has announced the release of GXT 3.1 beta for creating web apps using Java. Sencha GXT uses the Google Web Toolkit (GWT) compiler that allows developers to write apps in Java and compile their code into highly optimized cross-browser HTML5 and JavaScript. Sencha GXT provides widgets, templates and layouts, advanced charting, data loaders and stores, and more.
GXT 3.1 beta introduces Theme Builder, a new tool for theming GXT applications. It also introduces the Neptune theme built entirely with this GXT 3.1 beta, adds support for GWT 2.6, and fixes a variety of bugs reported by our Sencha users.
Theme Builder is a tool that takes a simple config file and generates a jar file with all of the appearances necessary to theme a GXT app. The config file format allows for CSS3 values such as border radius and gradients, and Theme Builder creates appearances that can be used in browsers that may not support those features. It does this by using modern CSS and HTML where possible, and otherwise generating images of the required features.
While GXT 3.1 continues to support Java 6, the Theme Builder itself requires Java 7, though the code generated by Theme Builder will be compatible with Java 6. The command line tool is tested to run on both Windows and OS X, as well as several Linux distributions. The shell and batch scripts in the download zip run only on Windows or OS X to keep the zip file from being much larger. To run the script on Linux, a copy of PhantomJS will be required.
With over 350 configuration properties, almost all widgets and cells available in GXT can be themed. For all widgets displaying text, the family, size, color, weight can be specified via a single config. For widgets with borders, the color, width, style can also be specified. In many widgets, padding and spacing is configurable, as well as background colors, and sometimes even gradients.
GXT 3.1 beta includes a new theme, Neptune, generated entirely with the Theme Builder. Neptune is generated entirely from its config file, with no custom HTML, CSS, images or Java. Neptune can be used as the default theme by first moving to GXT 3.1 and then adding the gxt-theme-neptune.jar to a project.
When Senncha added support for GWT 2.6, they had to break compatibility with GWT versions 2.4 and 2.5, so any project that adopts GXT 3.1 will need to also use GWT 2.6. Moving to GWT 2.6 comes with many fixes and improvements over GWT 2.5.1 that are documented in the release notes.
Sencha acknowledges that there are currently a few known issues in the Theme Builder that are visible in Neptune or any other generated theme. These issues are all specific to browsers that are unable to handle modern CSS and HTML, such as IE8 and 9. TabPanel has the most obvious issues — for bottom tabpanels, the images are not aligned correctly. Dual list fields, grid row editing, and button groups do not show the same rounded corners in IE8 and 9 that you see in modern browsers. Sencha is working on resolving some of these issues, and hope that these and other issues reported by the community will be resolved before the final release. There is an active Sencha GXT 3.1 Beta forum developers can use to keep up with the progress of the beta.
For more information visit the link below.