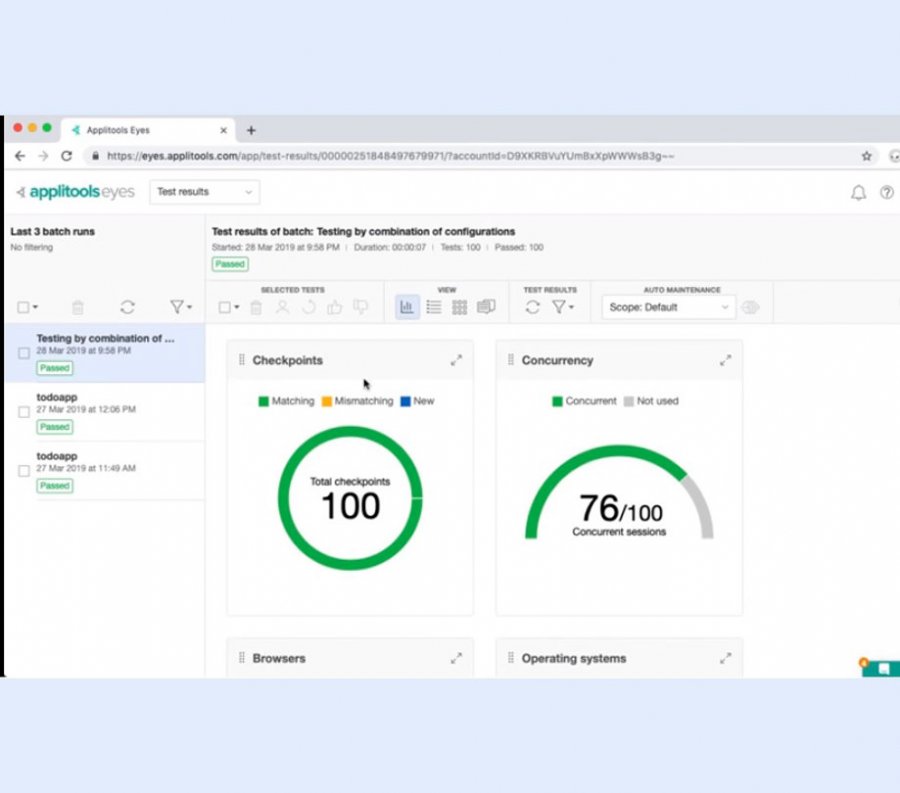 Applitools announced the general availability of the Ultrafast Grid. The Ultrafast Grid is a state of the art cloud platform that enables blazing fast concurrent rendering of apps on different browsers and devices, with the superior reliability and stability that only Visual AI can deliver.

Applitools, the leading provider of Visual AI for intelligent functional and visual testing, today announced the general availability of the Applitools Ultrafast Grid. The Ultrafast Grid is a state of the art cloud platform that enables blazing-fast concurrent rendering of apps on different browsers and devices, with the superior reliability and stability that only Visual AI can deliver.

The Ultrafast Grid, built on modern container technology, is now fully integrated with Applitools Eyes offering unprecedented speed via parallelization and DOM caching techniques. When you combine the 70x speed boost of the Ultrafast Grid with the 30x productivity boost of Visual AI, the industry is seeing the most revolutionary advancement in automated testing in over a decade.

"The cost of testing new releases across different browsers and devices forces enterprises to choose between adding expenses via additional resources, increasing risk with a reduction of test coverage, or slowing down release cadence," says Torsten Volk, Managing Research Director at EMA Research. "Applitools navigates the vicious triangle by providing AI-driven testing for any browser and any device, nearly eliminating the test overhead per release. This enables enterprises to release software more frequently without added cost or risk, allowing them to be a lot more responsive to market requirements. This ultra-responsiveness to customer requirements is what CI/CD is all about."

The Ultrafast Grid now offers the fastest, most reliable and cost-effective solution for teams to quickly succeed in their test automation and CI/CD efforts. Applitools solution leverages Visual AI for improved test coverage, while substantially reducing the test code that results in wasted time and endless maintenance cycles. It simplifies cross-browser testing by eliminating the need to tediously run functional and visual tests individually across all browsers and viewports. Further, it integrates seamlessly with any existing DevOps or QA environment, unlocking the path to CI/CD for faster releases without sacrificing quality.

“Accelerating time to production without sacrificing quality has become table stakes for Agile and DevOps professionals,” said Igor Draskovic, VP, Developer Specialist at BNY Mellon. “The team at Applitools has taken a fresh approach to cross-browser testing with the Ultrafast Grid. While traditional cloud testing platforms are subject to false positives and slow execution, Applitools’ unique ability to run Visual AI in parallel containers can give your team the unfair advantage of stability, speed, and improved coverage. This modern approach to testing is something that all DevOps professionals should strongly consider.”

The Ultrafast Grid has seen quick adoption and is already being used successfully in production. Since the beta launched in Spring 2019, Applitools has signed more than 50 Global Fortune 500 customers helping expand market presence significantly.

“I was so pleased with the results we achieved with Applitools at my previous employer, that I am currently replicating this environment in my new role,” said Greg Sypolt, VP Quality Assurance at EverFi. “When we added Applitools Visual AI + the Ultrafast Grid solution to our test generation framework, we were able to decrease test authoring time to under five minutes per test, while increasing test coverage, reducing build time, and achieving a 99% pass rate. The level of efficiency we achieved is a testament to strong leadership, an incredibly talented team, and innovative partners such as Applitools.”

“Continuous quality is key to success today, but existing test tools, frameworks, and grids are unable to deliver on that promise,” said Gil Sever, co-founder, and CEO of Applitools. “The combination of Applitools Eyes and the Ultrafast Grid allows organizations to deliver and execute cross-browser tests more consistently and quickly, and at a fraction of the cost. Tests can now be run with fewer lines of code and with the assistance of Visual AI technology across all browsers. This solution creates a functional and visual testing platform that ensures app quality across all screen sizes and device types, which is key to successful digital transformation.”