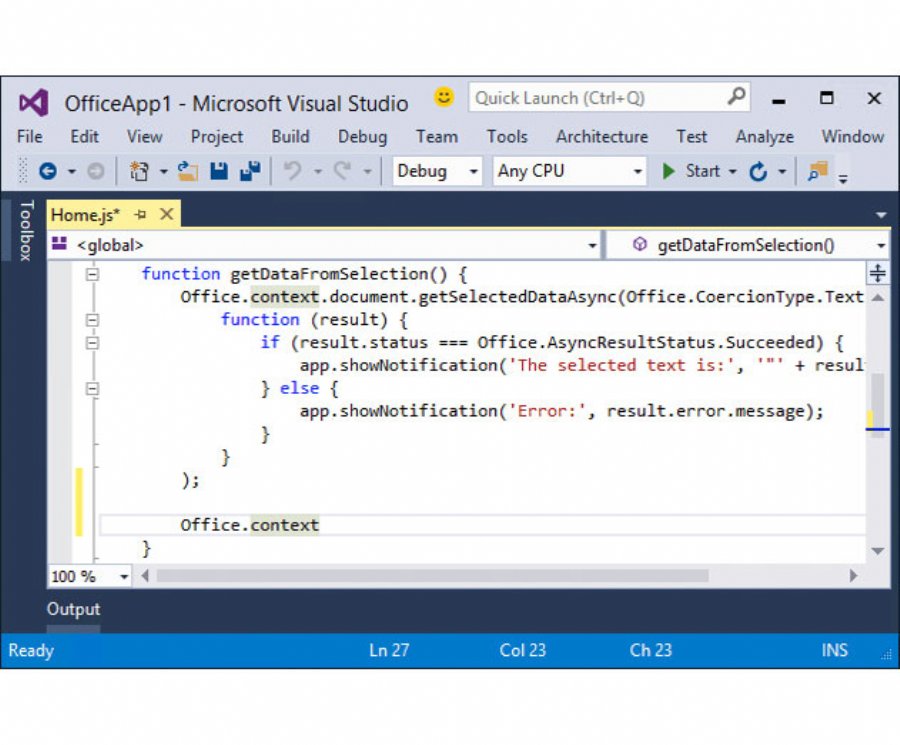 
7,731
In addition to the announcements we covered here during the Microsoft Build 2016 developer conference, there is now new functionality for developers to leverage Microsoft Office, Xamarin’s capabilities in Visual Studio Community, and new Azure Services.
Microsoft Office Platform
Among the new opportunities for developers to build on the Office platform includes new extensions and new connections to the Microsoft Graph, an intelligent fabric that applies machine learning to map the connections between people, content and interactions across Office 365. Microsoft has released six new APIs for the Microsoft Graph, made generally available last fall, that let developers link Office 365 data to third-party solutions.
The company also now offers new functionality that lets developers build apps and place them directly into Word, Excel and PowerPoint ribbons. A new Skype for Business App SDK and Skype Web SDK allow companies to integrate Skype calls directly within their Web or device.
A new developer portal for Office 365 Connectors is now available for developers to write and publish their own connectors. Connectors deliver relevant content, such as updates on financial records or helpdesk logs, from popular apps and services directly into Office 365 Groups conversations. The developer portal is launching with connectors such as Asana, Salesforce, Trello, Twitter, UserVoice, Zendesk and many more.
Cross Platform Development
Other Microsoft developer news includes the opportunity to build native cross-platform mobile applications is the company’s inclusion of Xamarin’s capabilities in Visual Studio Community and as well as releasing Xamarin Studio for OS X free as a community edition. In addition, Visual Studio Enterprise subscribers will now have access to Xamarin’s advanced enterprise capabilities at no additional cost.
The company also announced a commitment to open source the Xamarin SDK, including its runtime, libraries and command line tools, as part of the .NET Foundation in the coming months.
Azure Services
Finally, new Azure services were announced to help developers build next generation apps for the Internet of Things, microservices and more. Included in the Azure announcements were:
- The general availability of Azure Service Fabric, a microservices application platform developers can use to design apps and services at cloud scale. Service Fabric handles application lifecycle management for constant uptime and application scaling. Also announced were previews of Service Fabric for Windows Server, for deploying on-premises and other clouds, and Service Fabric for Linux and Java APIs. Microsoft will be open-sourcing the programming frameworks of Service Fabric for Linux later this year.
- A preview of Azure Functions that extends Azure’s platform services to serverless compute for event-driven solutions. Functions lets developers handle tasks that respond to events common in Web and mobile applications, IoT, and big data scenarios. Functions works with Azure and third-party services, automatically scaling out to meet demand and only charging for the time functions run. With an open source runtime, developers will be able to host Functions anywhere on Azure, in their datacenter or on other clouds.
- New Azure IoT Starter Kits available for purchase. These kits allow anyone with Windows or Linux experience to build IoT prototypes that leverage all Azure’s IoT offerings, at a cost of $50 to $160. In addition, early adopters can now use the Azure IoT Gateway SDK, which enables legacy devices and sensors to connect to the Internet without having to replace existing infrastructure, as well as device management in Azure IoT Hub to maintain and manage IoT devices at cloud scale.