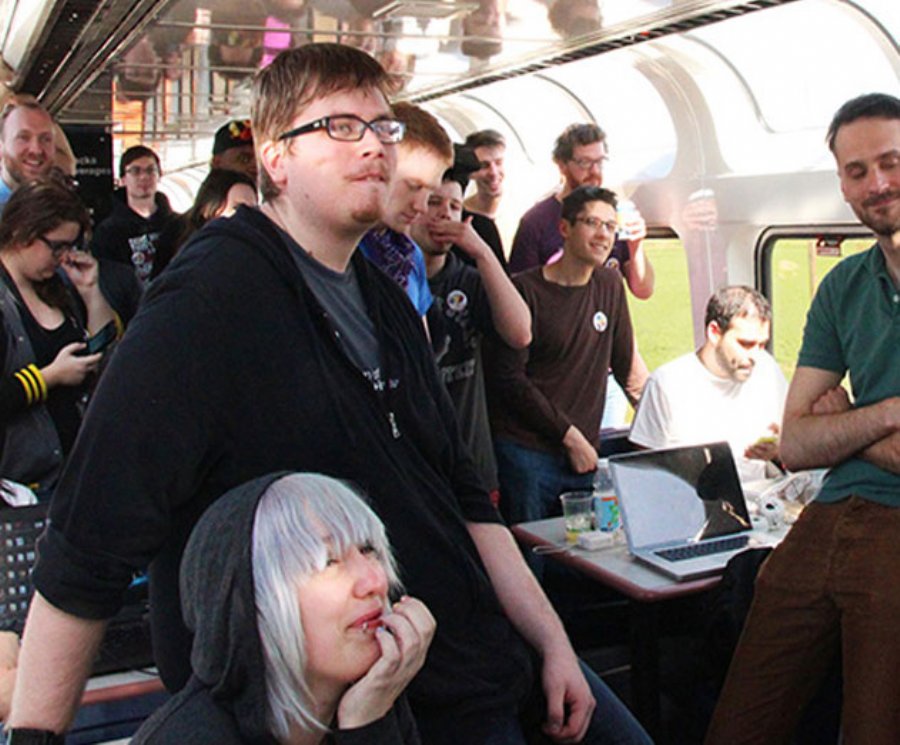 
3,087
What do you get when you take a collection of game developers, put them on a train in Chicago and send them to GDC in San Francisco? You get Train Jam, the brainchild of Adriel Wallick, an independent game developer most currently based in the Netherlands.
Adriel came up with the idea of the Train Jam in 2013 when she traveled from Boston to Seattle via Amtrak’s Empire Builder to attend PAX Prime. This is the second official Train Jam, which debuted last year. That first trip saw over 60 developers participate.
For this year, the number of participates doubled to over 120 game developers who left Chicago on the California Zephyr which travels from Chicago to San Francisco, stopping in Denver, Glenwood Springs and other cities along the way.
The team had fun, but faced challenges for the trip, including how to get back home. “Participants had to figure out their your own way home. Train Jam is a one way ride!” said Adriel. Also, there is no Wi-Fi offered on the California Zephyr (really Amtrak?). However to the generosity of Karma, they had a number of pre-paid Wi-Fi hotspot devices available. And because the group was traveling through many remote areas in the United States, there was limited access to the Internet so developers had to figure out ways of working offline, download tools before hand, and more. And for those that rode, slept and worked in coach, showers were not an option until arriving in San Francisco.
The Train Jam also offered a student ambassador program where more than 30 college students were able to participate from schools including New York University: Game Center; Rochester Institute of Technology; Eastern Kentucky University; University of Wisconsin; DePaul University; Wilmington University; Michigan State University; NHTV Breda University of Applied Sciences; and Deakin University. A number of the students had their costs underwritten by their colleges.
All in all, more than 40 games were created during the trip including ingle player, multiplayer, mobile games, and more. Links to the games will be made available on the Train Jam website by mid March.
Sponsors for the trip included Unity, Intel, YoYo Games, Playstation, Vlambeer Games, Playvue and GDC which provide free exhibit space to allow the developers to showcase their games. Companies who are interested in sponsoring next years event can do so by emailing info@trainjam.com.