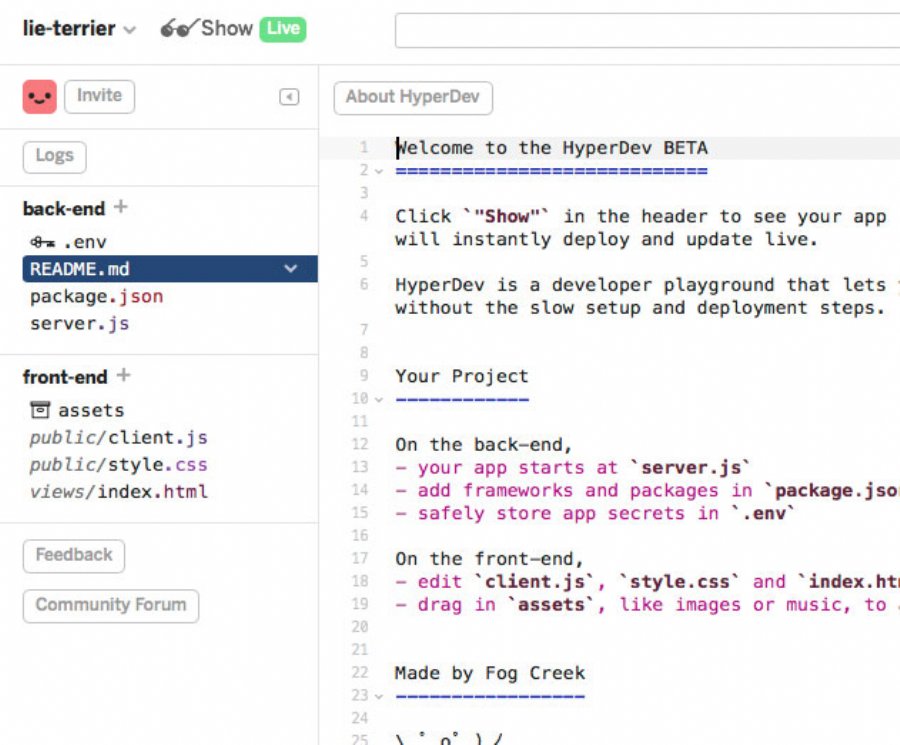 
4,377
Fog Creek Software has launched a new rapid online web app development product, HyperDev, which offers a developer platform for building full-stack web apps combining automated deployment, instant hosting, and collaborative editing.
The platform has been in closed beta for several months and is now in open beta. HyperDev works by providing developers access directly into an active NodeJS project. It eliminate the complexity of configuring servers, running shell commands, compiling files, setting up build pipelines, mastering version control systems and more. It removes the challenges developer’s face with set up environments, memorize Git, or manually deploying updates.
Fog Creek offers these five key aspects to using the platform:
1. The Fastest Way to Build: In HyperDev the apps developers create are instantly live, hosted by Fog Creek, and are always up to date with the latest changes. As soon as a developer goes to HyperDev a new project is created that’s already running with its own URL. As changes are made they are automatically saved and deployed in the background. This makes HyperDev work well for building products, prototyping ideas, and hacking together scripts to solve a problem.
2. The Quickest Way to Get Started: There’s no setup required. So that means there’s no dev environment setup, no build pipeline to configure, no need to memorize Git, and no manual code commits and deploys. Fog Creek states that the goal was to remove as many of the distractions from coding as possible so developers only need to write code to create a web app. This means HyperDev is especially useful for Hackathons, code tests, and live examples in documentation on GitHub, and elsewhere.
3. A Flexible Way to Code Together: The platform provides the ability to invite teammates and friends to projects with just a link offering the opportunity to collaborate on code and see changes as they’re made. This makes HyperDev useful for code reviews, pair programming, and working on projects in teams.
4. An Efficient Way to Create and Learn: Fog Creek is building a community of developers around HyperDev who are sharing their projects that other developers can learn from and re-use. Developers can get started quickly by remixing, or copying and editing, existing community projects. Remixing makes using new frameworks and learning to code easier and there are a number of Get Started projects available that provide jumping off points for persistence, connecting to databases, sending emails, creating APIs, or trying out React, CoffeeScript, Jade and Stylus, among other things.
5. An Easy Way to Get Help or Feedback: Every project gets a URL for editing and viewing so code or creations can be shared. Viewers can watch and review code as it is being written, which facilitates live coding and teaching. Or viewers can see the real thing running and provide feedback to improve and refine it.
Upcoming priorities for the platform include GitHub integration. Fog Creek will be adding branching, to provide a safe place to work on code away from production. Support for other languages beyond just Node.js is also planned for future updates.