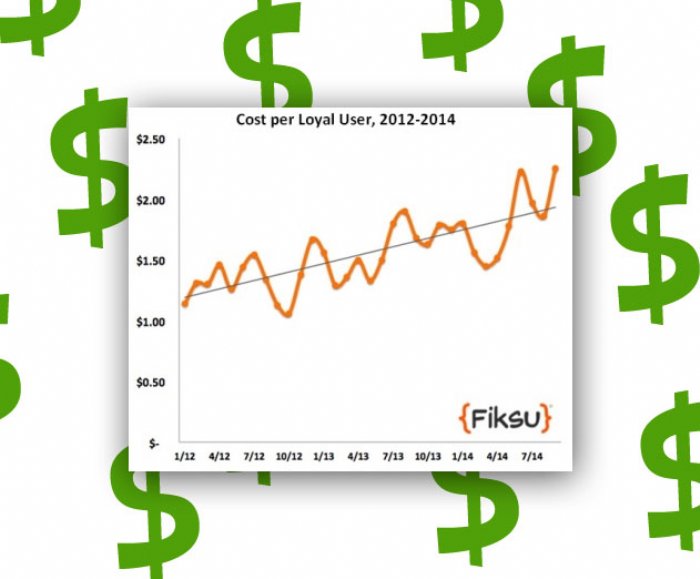 
30,596
If we know one thing, Apple’s impact on mobile is way is way bigger than its actual smartphone market share footprint. As we reported earlier in the news item “Mobile Industry Takes the Month of August Off as Users and Marketers Show Less Activity,” app users and the mobile industry as a whole were somewhat lethargic in August as indexes for app activity and app marketing costs were down.
And so what about September? Bam! Wake up - marking costs have hit an all time high for September. So what happened? You know the answer – a new iPhone was released.
The August and September numbers used for this reporting were from the Fiksu Index, which benchmarks app store competitiveness and the cost of mobile app marketing. And for September the Fiksu Index showed app marketing costs hit an all-time high following the launches of the iPhone 6 and 6 Plus and Apple iOS 8 release.
The index shows the cost for marketers to acquire loyal users (Cost Per Loyal User or CPLU) reached $2.25. CPLU increased 21 percent from August 2014, and 34 percent since September 2013. Taking a look at the increasing costs to acquire loyal users over a two-year time period (2012-2014), Fiksu has observed an upward sloping trend line demonstrating that marketers continue to face an environment of increasing costs and competitive forces.
Fiksu also reports that the influx of early adopters of the iPhone 6 was 116% higher than that of the iPhone 5. This rapid adoption drove up competition for app marketers, as users downloaded and engaged with new apps from the App Store.
For the Fiksu Competitive Index, which measures the average aggregate daily download volume of the top 200 ranked iOS apps, the numbers show a rise of 4 percent in September to 5.5 million daily downloads. While this metric had a 4 percent decrease year-over-year, Fiksu indicates a contributing factor is likely the reduction of apps displayed in the Top Charts in the App Store from 300 to 150. Now, some of the apps tracked in the Index are no longer scrollable in the top apps listings meaning they are not as readily discoverable by users.
The Cost per Launch (CPL) and Cost Per Install (CPI) Indexes both increased on iOS in September. This was the net effect of various contributing factors including a rise in competition, user activity and media costs as brands jostled for the attention of new device owners. Another factor was users deleting apps to free up storage space for iOS 8.
You can view more on the indexes, including additional graphs, on the Fiksu website.