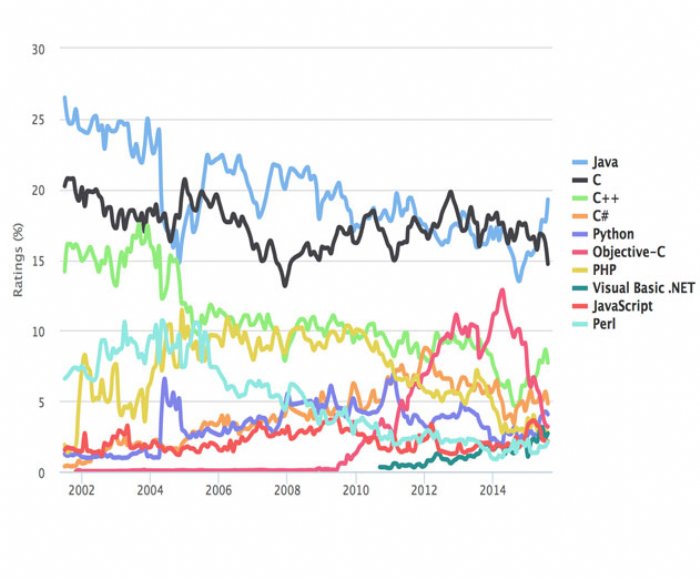 
9,494
In its August Programming Community Index, TIOBE reports that Java continues to be the top programming language. In its analysis, the TIOBE team reports that Java is picking up market share from Objective-C.
The index is intended to provide an indicator of the popularity of programming languages and is updated once a month. The ratings are based on the number of engineers world-wide, courses and third party vendors. Search engines such as Google, Bing, Yahoo!, Wikipedia, Amazon, YouTube and Baidu are used to calculate the ratings. The TIOBE team points out that the index is not about the best programming language or the language in which most lines of code have been written.
Here are the TIOBE comments about the August report:
Java is now almost 4.5% ahead of the rest of the pack. We have to go back to 2008 to see such a big difference between Java and the number 2 of the TIOBE index. Java version 8 is clearly a success. This is mainly thanks to the functional programming idiom that has been added to this latest version. Java went in decline when Oracle bought Sun Microsystems (and thus Java) in 2010. Several Java gurus left the company, being afraid that this was the end of Java. Indeed, Java was verbose and way behind languages such as C# in terms of expressive features. But the doomsayers appeared to be wrong.
The first few years nothing much happened to the language, but the release of Java 8 in 2014 is a big leap forward. It is now possible to write Java programs in a functional and concise way. Surprisingly or may be not, Java is consuming a large part of the market share that Objective-C is losing, while Objective-C's successor Swift was supposed to do this.