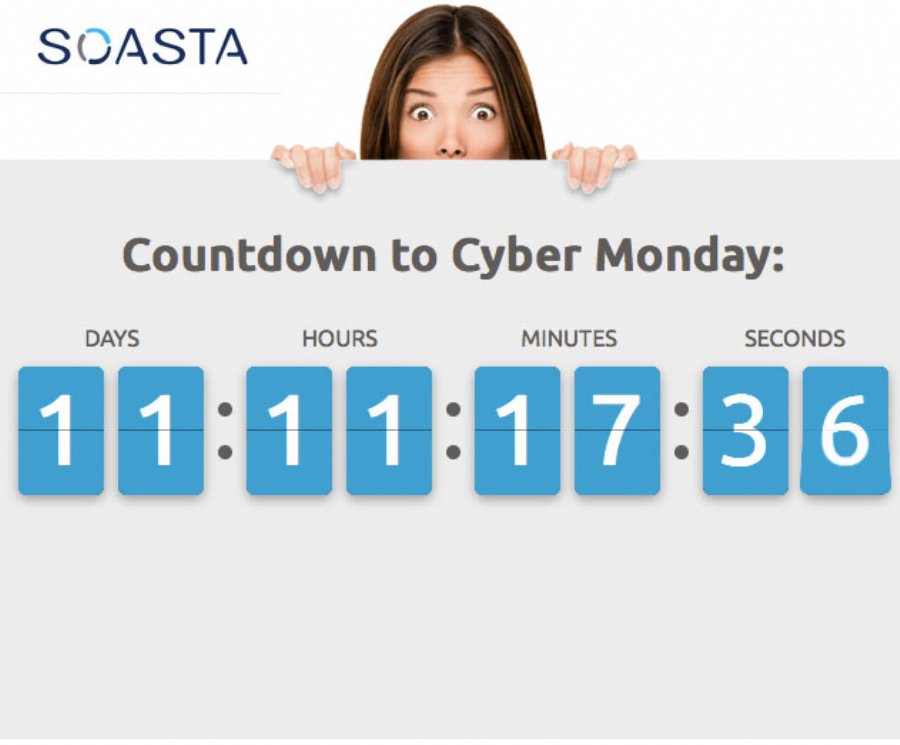 
81,070
SOASTA has released its 2016 Holiday Retail Insights Report. The report includes new research that covers the ideal load time for peak conversions, how fast shoppers expect a site to load before they will bounce, and what digital downtime actually costs retailers.
The report’s key findings include:
- 28 percent of customers will not return to a slow site
- In 2015, 57 percent of Black Friday traffic came from mobile
- Amazon accounted for more than a third of 2015 online holiday spending
- The “sweet spot” for peak conversions is a load time of 2.4 seconds
- A mere one-second slowdown resulted in an 8 percent increase in bounce rate
How fast do holiday shoppers expect websites to be?
According to more than 1.5 million beacons’ worth of user data for ten leading retailers during Cyber Week 2014 and Cyber Week 2015, the load time “sweet spot” for peak conversions was 2.4 seconds, a 37 percent decrease from the 3.8-second page load time for peak conversions in 2014. In other words, consumer expectations and behavior shifted sharply toward a preference for pages that were 37 percent faster.
Following this trend, the performance sweet spot in 2016 is likely to be two seconds or less.
What’s more, just a single-second slowdown triggered an eight percent increase in bounce rate. A five-second slowdown in load time (from two to seven seconds) resulted in a bounce rate increase of 42 percent. Furthermore, nearly one in three shoppers (28 percent) will not return to a slow site.
E-commerce and mobile are more important than ever
Fifty-seven percent of Black Friday traffic came from mobile in 2015; in addition, the National Retail Federation projects that online sales will increase by up to 10 percent this holiday season.
E-tailers should therefore be particularly vigilant and proactive with their load times: while overall load times improved between 2014 and 2015, in 2015 fewer visitors experienced “sweet-spot” load times than in 2014.
Online retailers must also avoid downtime at all costs, as there is a correlation between downtime and market value of brands and a significant negative correlation between outage announcements and stock returns.
The hourly cost of downtime varies by industry and size of the brand, but estimates are all mind-boggling. A 20-minute Amazon outage cost about $3.75 million. For Fortune 1000 companies, the average total cost of unplanned application downtime per year is $1.25 billion to $2.5 billion. The average hourly cost of an infrastructure failure is $100,000 per hour.