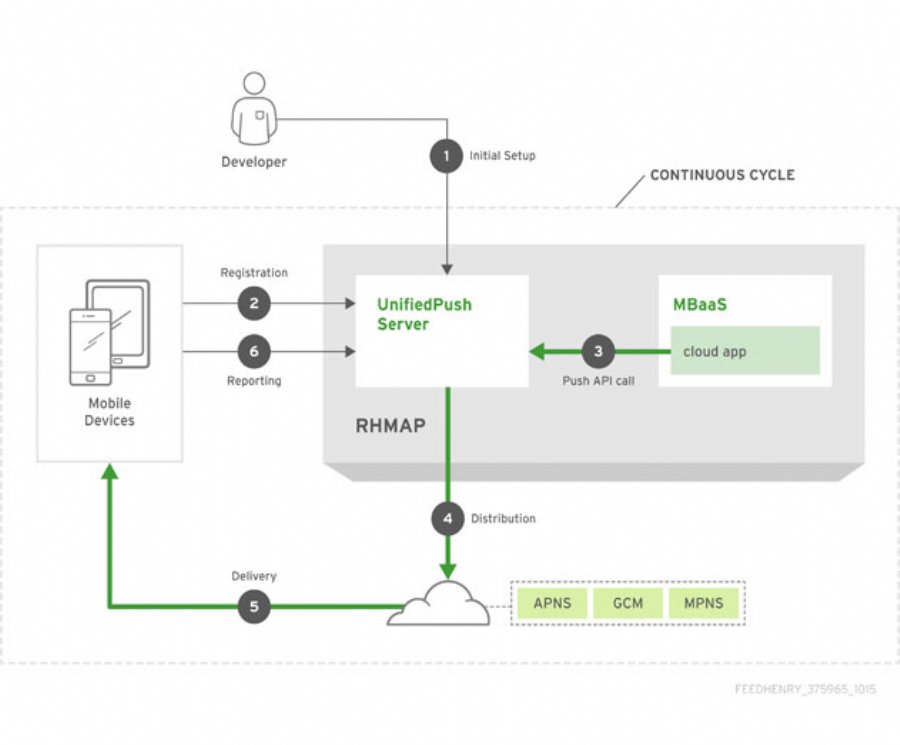 
19,748
The main focus of the recently released Version 3.6 of the Feed Henry’s (which is now owned by Red Hat) cross platform Mobile Application Platform (MHP) is the integration of the Aerogear UnifiedPush Server into the platform which provides improved iOS, Android and Windows Phone push notification functionality. Also new is Windows 10 support.
With the UnifiedPush Server developers can send native push messages to different mobile operating systems. The MHP platform currently supports Apple’s APNs, Google Cloud Messaging and Microsoft’s Push Notification service (MPNs).
MHP’s Template Apps, APIs, and SDKs also now support Windows 10 in addition to Windows 8.1. Developers can use Visual Studio to locally build both Native and Cordova Apps for Windows 10 that work with the Mobile Application platform through the platform SDKs.
With the platform’s open toolkits developers can development can access tools they are comfortable with to create native, hybrid, HTML5 or web apps. Toolkits include native SDKs, hybrid Apache Cordova, HTML5 and Appcelerator Titanum as well as frameworks like Xamarin, Sencha, Backbone.js, Angular.js and Ember.js.
For hybrid apps, the MHP platform gives the option to build for multi-platform mobile devices and for web apps. The development of native apps is supported with SDKs for iOS, Android and Windows Phone 8 with access to other platform functionality.
The hosted Build Farm service provides builds for native and hybrid apps for iOS, Android, Windows Phone and Blackberry, generating the build and digitally signing the apps. This eliminates the need to maintain device-specific hardware/software environments. Red Hat’s Build Farm supports the latest version of Apache Cordova with the option to create simple hybrid or advanced hybrid apps that include any chosen Cordova plugins
Developers can work locally in their own environment or online through the hosted IDE. FHC, the command line interface (CLI) to the platform, allows developers to code locally with their favorite editor and debuggers while remaining connected to the project, the team and all platform features. Working through the CLI or through the online IDE developers can collaborate using Git, leverage the MBaaS features and re-useable code, and self-discover new cloud APIs and shared services.
And digital certificates and credentials are stored centrally so they can be managed and discovered by teams throughout the app lifetime.