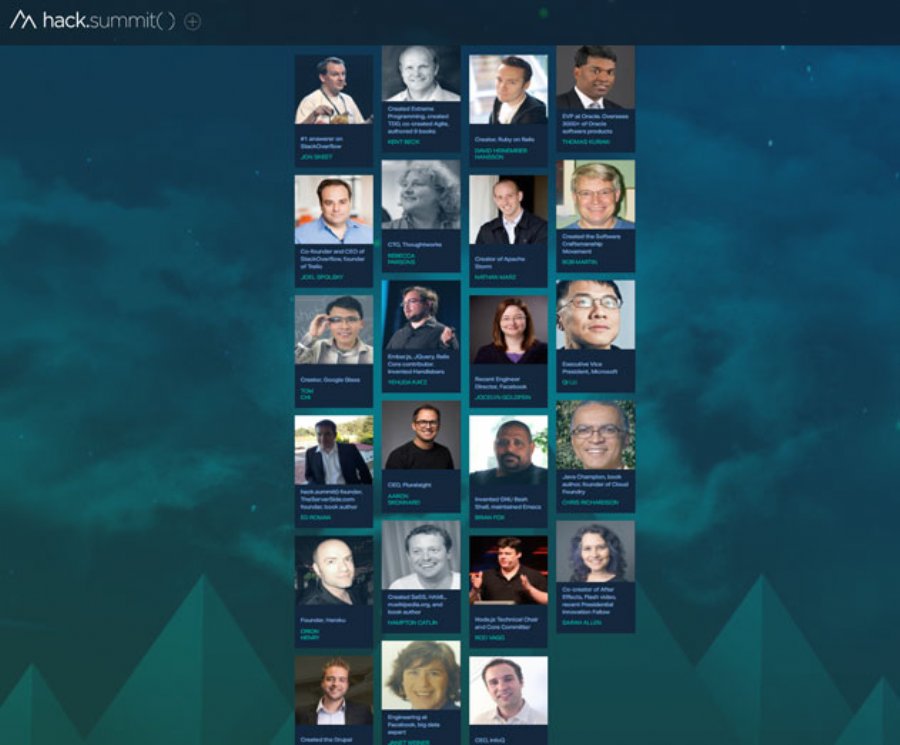 
28,273
HackHands founder Ed Roman sat with us to talk about the second installment of hack.summit(), which debuted last year as the largest-ever Web conference for developers with 64,000 registrants. The event, which is designed to aid non-profits focused on bringing diversity and education to tech, will be organized and promoted by Pluralsight, which recently acquired HackHands.
As was the case last year, all ticket sales will support non-profits serving the software and Web development space. Last year, hack.summit leveraged top-flight speakers (e.g. creators of Google Glass, Ruby on Rails, Bittorrent, etc.) to raise $50,000 for non-profits such as Women Who Code, Black Girls Code and Code.org. This year, HackHands is hoping to raise exponentially more for these groups.
Prior to joining HackHands, Ed was founder & CEO of Ghostfire Games, an award winning gaming company. Prior to then, he was founder & CEO of The Middleware Company, a Java training/consulting company, which he grew over 4 years and then later sold. He is also an angel investor who leads a syndicate on Angelist.
ADM: What’s the purpose of hack.summit()?
Roman: hack.summit(), which takes place the week of February 22, 2016, is a virtual event which unites the world’s most renowned programming language creators, open-source contributors, and thought leaders to raise money for nonprofits in the programming space. The hack.summit() mission is to raise money for coding non-profits such as Code.org, Women Who Code, and Black Girls Code. All ticket sales go to coding non-profits.
ADM: What’s the history behind the event?
Roman: hack.summit() was created in 2014 as an experiment in virtual conferences. Up until now, there hasn't been a really strong success for a virtual conference. Early attempts tried to mimic the real world via 3D virtual worlds, which caused sluggishness  and browser compatibility issues. We researched this and realized that none of this technology was necessary, and what people really wanted was to learn from speakers in a video-chat environment. So we embarked to create this event.
For us, it's important that any initiative we undertake also has a social entrepreneurship element. So this event became a fundraiser for non-profits in the coding space, many of whom combat diversity issues among programmers.
At first, we were hoping to line-up 5,000 attendees. But that quickly soared and we ended up with 64,000, making this the largest programmer event ever held (larger than all of Microsoft's conferences combined). We were shocked at those results and now believe that virtual events are our future.
ADM: Why is the event online only?
Roman: I used to run physical real-world conferences for programmers, and I remember how costly it was. You need to book hotel ballrooms, reserve a number of sleeping rooms at tremendous financial liability, pay for food & beverage, hire union labor, travel to/from the event, hire a huge staff to run the event, have giveaways at exhibit halls, and a bunch of other costly nonsense. It can easily cost in the millions of dollars to produce a well-run conference. With modern technologies, this isn't necessary, and so we embarked on a pure virtual mission to prove this model out. We hope to inspire others to follow in our footsteps and have already seen dozens of other virtual events spawn from last year's conference, which is great to see.
ADM: Who will be speaking?
Roman: We're keeping the speaker list invite-only. It's the top computer science contributors in the world, such as the creators of Ruby on Rails, Google Glass, Drupal, the mobile wikipedia, Apache Storm, Heroku, and many more. It's an all-star list of keynote-only level speakers - and is unprecedented at programmer events, only made possible by the virtue of this event being pure virtual and not requiring travel.
ADM: What kinds of topics/issues will be addressed?
Roman: As a truly broad event, there is something for everyone in the IT engineering space to learn. Top industry leaders will cover everything from software engineering and open source to web and mobile programming concepts. No specific experience is needed, although the event is targeted most closely to IT professionals and engineers.
ADM: What’s the structure of the event? Will there be more than speakers?
Roman: The event runs during daytime hours PST, and there is a single track, since each speaker is keynote-level, and deserves the full audience's attention.
ADM: How will the event be different in its second year?
Roman: We're now helping developers find their dream job at hack.summit(). We're also running a virtual hackathon, which is going to be the largest hackathon in history - over 30,000 developers have already registered from 900+ cities.
ADM: What are your goals for the event?
Roman: The three primary goals are:
1) To raise money for coding non-profits
2) To educate the world's developers from our computer science leaders
3) To hack for a cause, and compete worldwide for the largest hackathon prize pool in history
ADM: What does it cost to attend/participate?
Roman: It's an optional donation to a coding non-profit of your choice. Those who are not in a position to donate can pay with a tweet to help us find more donors. So this event is available to both the rich and poor.
ADM: What was your criteria for selecting the non-profits who benefit from the event?
Roman: The coding non-profits represent those who are making significant inroads to combating diversity issues in programmers (specifically among blacks, latinos, and women), as well as helping transform government through software.
ADM: Can you tell me more about the virtual hackathon accompanying the event?
Roman: We have partnered with a company called Koding.com, host of the world’s largest global hackathon, to extend the virtual event’s success under our brand. They were so inspired our non-profit work with hack-summit() that they agreed to contribute the hackathon for an elevated experience. Developers will now compete on the worldwide stage to “hack for good,” as their programming efforts will help raise money for coding non-profits. Additionally, with over $150,000 in cash prizes being awarded through our sponsors, this is the largest prize pool in hackathon history.