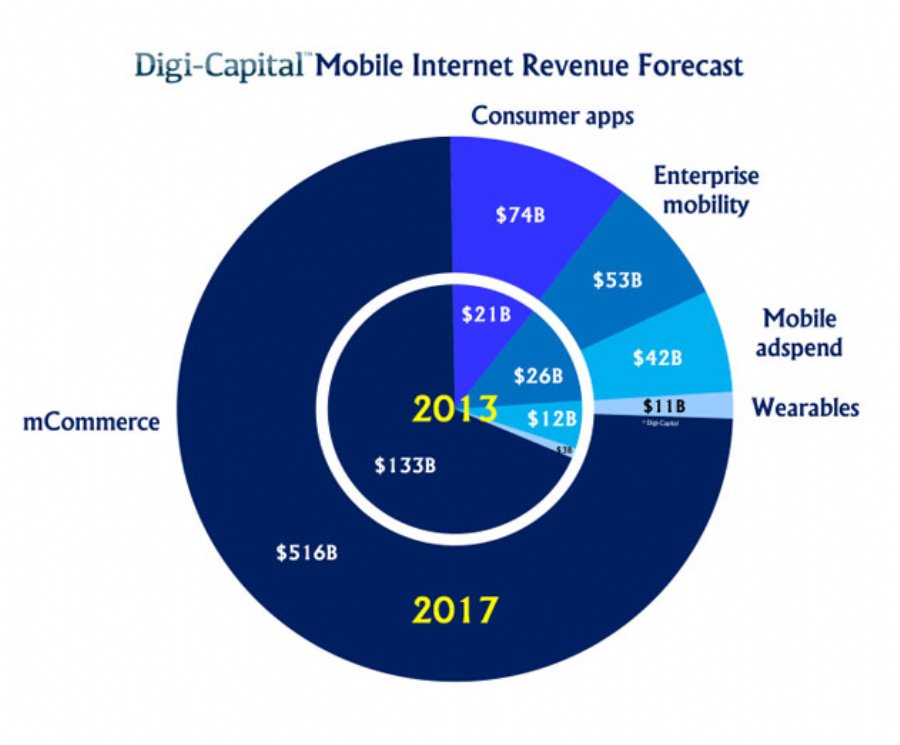 App Stores And App Distribution Drive The $700B Mobile Internet


23,438
Mobile internet revenue are expected to more than triple to $700 billion by 2017 and app stores and app distribution are one of the main drivers to this area. Digi-Capital released results that over $19 billion has been invested in the last 12 months. There are currently 32 billion-dollar mobile Internet companies to date.
Consumer apps were indicated to deliver more than $70 billion in revenue by 2017. The mobile games market will no longer be the dominant force as other areas are poised for growth. Mobile games still continued to produce three-fourths of entire mobile apps revenue in 2013. App-as-a-Service business models were also taking off.
App stores offer specific features for users and the enterprise which can enhance work environment and experiences. Businesses can access version controls, smartphones which may have passages for mobile applications. Developers can personalize an enterprise app store to offer businesses more convenient access and to download data and tools.
Enterprise app store development may also integrate admin portals, security features, alerts and other processes for business. Developers can integrate best practices as this is a key element to app store development. Mobile tools and enterprise apps are a powerful way for the business to stay up to date using these technologies and also further adopting mobile BI apps as they mature within the market.
Mobile internet and mobile devices are transforming everyday lives and the work environment. As the areas evolve, users will also adapt and disruptive industries will also result in new tools and business models for the future. Mobile apps and smartphones have the potential to surpass a traditional computer device this century. Developers can see a plethora of new opportunities within these and other markets.
Digi-Capital forecasts mCommerce would derive half a trillion dollars in revenues. The total revenues for consumer apps accounted for $74 billion consumer apps, $53 billion enterprise mobility, $42 billion mobile ad spend and $11 billion wearables. Mobile computing is making a substantial transformation. Mobile platforms benefit developers and the organization to improving value, flexibility and productivity.